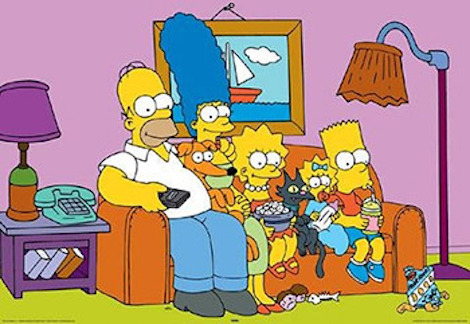 The Simpsons is famous for many things — being the longest running American sitcom (and animated series) ever, unleashing a number culturally trendy expressions (“Worst episode ever,” etc.), and for being just generally awesome. But perhaps its most notable accomplishment is setting an unofficial record for most guest spots by literary authors. If you want a list of all the books and authors mentioned on The Simpsons, this article at The Atlantic accomplishes that admirably. On the other hand, if you want a list of the best and funniest literary quotes from Springfield’s nuclear family, here you go. 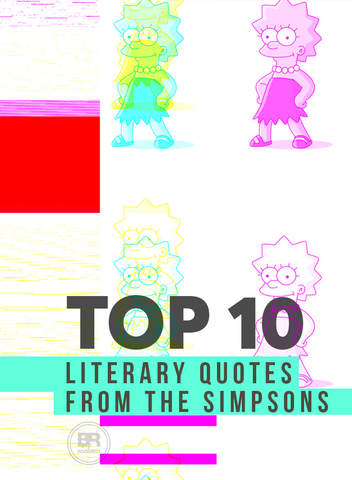 Lisa: “Oh, it must be Bloomsday. Every June 16, lovers of James Joyce follow the route traveled by Leopold Bloom in the novel Ulysses.”

Bart: “What you’re saying is, we’ve run out of fun things to do.”

9. On the over-analyzation of fiction, or why the curtains are blue…

Lisa: “Miss Tan, I loved The Joy Luck Club. It really showed me how the mother-daughter bond can triumph over adversity.”

Amy Tan: “No, that’s not what I meant at all. You couldn’t have gotten it more wrong.”

Amy Tan: “Please just sit down. I’m embarrassed for both of us.”

8. Taking the words right out of many women readers’ mouths:

Krusty the Klown: “Shut up, Updike!”

Lisa: “I think books have an amazing power to bring people together. Look, even Cletus is checking one out.”

6. Lisa, wise beyond her years in the ways of the world…

Lisa: “These (writers) are my only friends: grown up nerds like Gore Vidal, and even he’s kissed more boys than I ever will.”

Neil Gaiman: “I’ve heisted my way to the bestseller list once again. And the most brilliant part is… I don’t even know how to read!”

Also, on that episode; Homer: “I just hope we remembered to put in enough steampunk. Whatever that is.”

First, on one episode; Lisa: “Are you reading Gravity’s Rainbow?”

Then, on a later episode; Pynchon: “These wings are ‘V’-licious! I’ll put this recipe in ‘The Gravity’s Rainbow Cookbook’, right next to ‘The Frying of Latke 49.'”

(Note: This quote is far, far funnier than his quote earlier in the episode when he says he loves Marge’s book almost as much as he loves cameras…but that’s pretty funny, too.) 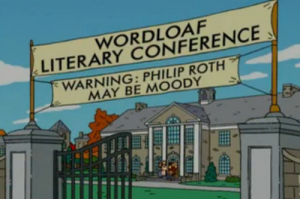 2. What EVERYONE’S thinking, with JK Rowling…

Lisa: “Can you tell me what happens at the end of the series?”

JK Rowling (kind of ticked): “Yes, he grows up and marries you… Is that what you want to hear?”

Michael Chabon: “That’s it, Franzen! I think your nose needs some ‘corrections!'”