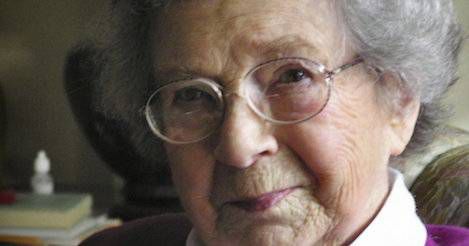 Ramona Quimby was the first character who understood my wild and unruly seven-year-old heart. If she had been real, we would’ve been besties. Back then I never thought about the people who wrote the books I loved, and because the Ramona books so effortlessly reflected the world I knew and even the grown-up stuff I didn’t quite understand (like parents fighting over a crock pot someone forgot to turn on), I was more inclined to believe that I was existing as Ramona while I flipped the pages and, of course, my older sister was stuck-up Beezus.

Now that I’m older and curious about the people behind the books, I can only just scrape the surface of Beverly Cleary’s incredible influence on children and adults everywhere, her accomplishments as a writer, and her impressive life. What better way to celebrate Cleary’s 100th birthday, than with a list of 100 awesome and just plain interesting things about this incredible human?

She became a librarian to support herself while she wrote.

She graduated from the library science program at the University of Washington in Seattle.

She started writing seriously after she and her husband moved to Berkeley, California.

She intended to write about the maturing of a sensitive female for her first book, but the words wouldn’t come.

She’s still sharp as a tack.

A neighbor babysat her children while she wrote.

Her children slid pictures they drew under the door to her writing room.

She’s sold over 91 million copies of her books.

She said writing was work she enjoyed and that she could do at home–“I didn’t have to catch a bus.”

She’s an incredible inspiration to writers and readers everywhere.

She received the National Medal of Arts award (in the Oval Office).

She published almost 50 books before retiring.

She was a mega-success from the start of her writing career to her retirement.

A sculpture garden in Portland, Oregon is dedicated to her (The Beverly Cleary Sculpture Garden for Children).

The sculpture garden was made possible thanks to the contributions of children and Cleary fans of all ages.

Her work has been enjoyed by over three generations.

She wrote about middle/working class families.

She has incredible resolve and knows who she is as a writer.

A recipient of the Catholic Library Association’s Regina Medal…

And recipient of the University of Southern Mississippi’s Silver Medallion.

She was born in rural Yamhill, Oregon on a farm.

She learned to write for children while telling stories aloud to them at the library.

She understands kids and writes for them.

Her mother arranged with the Oregon State Library to send books through the mail.

She believes her good memory of childhood comes from the six years she spent living on her family’s farm.

She was an only child without many children to play with in Yamhill, and was terrified about being around so many children when her family moved to Portland.

One of her earliest stories (written as a child) was about giving her pet chicken up to feed the troops.

Her mother was a frustrated writer. Cleary doesn’t know why she didn’t write even though she wanted to.

A teacher suggested she become a writer after reading some of her class assignments.

She remained friends with her school librarian all the rest of the librarian’s life.

She said, “Kids deserve books of literary quality, and librarians are so important in encouraging them to read and selecting books that are appropriate.”

She wanted to write about ordinary American children–“grubby neighborhood kids.”

She wrote her memoir, A Girl from Yamhill.

And My Own Two Feet, a second memoir about her college years onward.

In her second memoir, she vowed that she would ignore all trends and would not let money influence any decisions she would make about her books.

The University of Washington’s Information School created an endowed professorship in children’s librarianship in honor of Cleary.

She came back strong in reading in third grade after being relegated to Blackbird status (her class’s lowest reading group) in first grade.

The Dutch Twins by Lucy Fitch Perkins was the book that sparked her interest in reading.

She listened when a kid asked “Where are the books about kids like us?” and wrote Henry Huggins.

She’s simply an incredible human being.

Her mother attempted to homeschool her.

She met her husband at UC Berkeley.

She keeps in mind a bit of advice she learned from a professor who remarked on the importance of including the tiny details of everyday real life.

Her first book was an immediate success.

Cleary wrote in the mornings until lunchtime each day.

Cleary has lived in California for all of her writing career.

A sentence from a college English class “that the proper subject of the novel is universal human experience” has stayed with her throughout her career.

Cleary’s son said their family had the largest mailbox you could buy because of all the fan mail his mother received.

She didn’t have a book contract before she delivered a manuscript.

Ramona was given her name when Cleary heard one neighbor call out to another neighbor whose name happened to be Ramona.

She wrote nearly one book per year.

If she doesn’t enjoy writing something, she throws it out.

She particularly enjoyed reading fairy tales as a child.

Louis Darling created the iconic illustrations found in many of Cleary’s books. He and Cleary were teamed up until his death.

She drafts her books in longhand.

Commissioned to update the illustrations for The Mouse and the Motorcycle, Tracy Dockray rescued and cared for a baby mouse after Cleary sent her a message saying she needed a mouse model to get Ralph’s mouse ears right.

She received “a letter from a girl who said she was stunned that Ramona could go to the park alone.”

Cleary said of reading books as a young girl, “If I suspected the author was trying to show me how to be a better behaved girl, I shut the book.”

On writing, her mother advised her to keep it simple.

Her books have been published in over fourteen different languages.

PBS Television adapted the Ramona novels into a ten-part series.

Each of the Ralph S. Mouse books have appeared as one-hour films on ABC-TV.

At UC Berkeley, she stayed in the new and inexpensive women’s cooperative, Stebbins Hall.

In college, she avoided frat parties that served alcohol.

She eloped with her husband Clarence Cleary because her parents disapproved (because he was Catholic).

She worked at the Sather Gate Book Shop and as an Army librarian during WWII.

She was born Beverly Bunn.

Hollyrood-Fernwood School was renamed the Beverly Cleary School after the alumnus.

Cleary received a fan letter from a boy who claimed to be a dying elderly man, with a P.S. that the whole story was a lie. She wrote back to the boy to tell him he had a fantastic imagination.

She suffered, but recovered, from a bout of depression before beginning to write.

Dear Mr. Henshaw is the book that delivered the Newbery Award to Cleary.

She wrote about childhood as she had known it.

All of her books have stayed in print.

As a child, Cleary wrote a short story in which a girl visited Bookland and talked to Tom Sawyer, Peter Pan and Judy from Daddy-Long-Legs.

Cleary was named the University of Washington’s 2008 Alumna Summa Laude Dignata-the alumna of the year. It’s the highest honor the UW bestows upon its graduates.

Cleary recovered from a bout of smallpox as a child (partially why she fell so behind on reading in first grade).

She knew she could write a better children’s book than what was out there when she picked one up and read a puppy saying, “Bow-wow. I like the green grass.”

Ramona was originally an afterthought. Cleary thought that too many of her characters were only children, so she created a younger sibling.

Whenever it rains, she feels the urge to write.

While studying at UW’s School of Librarianship (in the late ’30s), she lived on $35 a month.

She’s written books for older kids, like Sister of the Bride and Fifteen.

She sent the film treatment for the 2010 movie “Ramona and Beezus” back to the writers because she didn’t like the ending.

She believes there’s a time when you should just stop writing, rather than “dribble on.”

She brought Ramona Quimby to life and for that I will love her always.

Celebrate by sharing what you love about Cleary and her books in the comments!