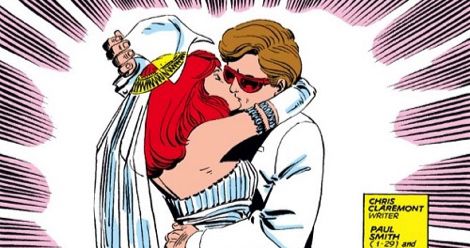 The X-Men are among Marvel’s most recognizable characters. They are mutants—born with extraordinary abilities and the occasional odd hair color—who have dedicated their lives to protecting others, no matter how much humans fear them.

But what you may not realize is that the X-Men aren’t quite as good at romance as they are at slugging bad guys. In fact, the X-Men are terrible at romance, and this post will prove it. I’m going to try to stick to the 1980s here, because a) that’s what I know best and b) neither of us wants to be here all day.

This article is fairly lighthearted, but if you feel that any discussion of incest or underage stuff will upset you, please do make use of the back button. 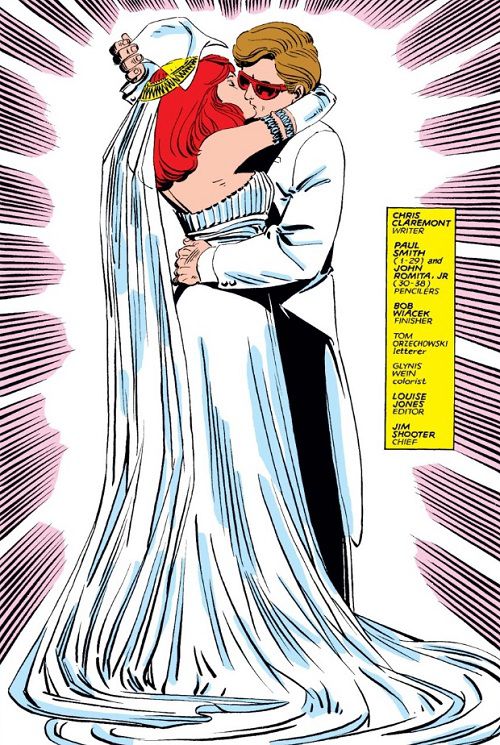 For as long as we both shall what now?

For years, Scott Summers has been madly in love with Jean Grey. Even after she sacrifices herself to stop the Phoenix Force from killing again (uh, spoilers?), he doesn’t stop loving her. But then, a miracle! Scott meets Madelyne Pryor, a pilot who miraculously survived a plane crash at the exact moment Jean died. And she just so happens to look like Jean’s clone. Because she is. But we don’t know that yet.

Scott falls head over heels for Madelyne. She agrees to marry him and they live happily ever after…until the actual Jean comes back, at which point Scott drops Madelyne and their baby son faster than ABC dropped Inhumans.

When Kitty Pryde officially joins the X-Men in Uncanny X-Men #139, she becomes the youngest member of the team. Before long, she develops a crush on her Russian teammate, Colossus, aka the only male X-Man that Deadpool could afford. Despite some initial resistance, Colossus finally admits that he loves Kitty too. They share a kiss and start dating officially.

That’d be a lot cuter if Kitty wasn’t fourteen years old. And before you ask, Colossus is at least nineteen by this point, so no, this is not okay. For some extra squick, Colossus has a sister who is Kitty’s age. And yet he still has zero problem going out with his little sister’s bestie. Why haven’t the Deadpool movies roasted him for that yet? 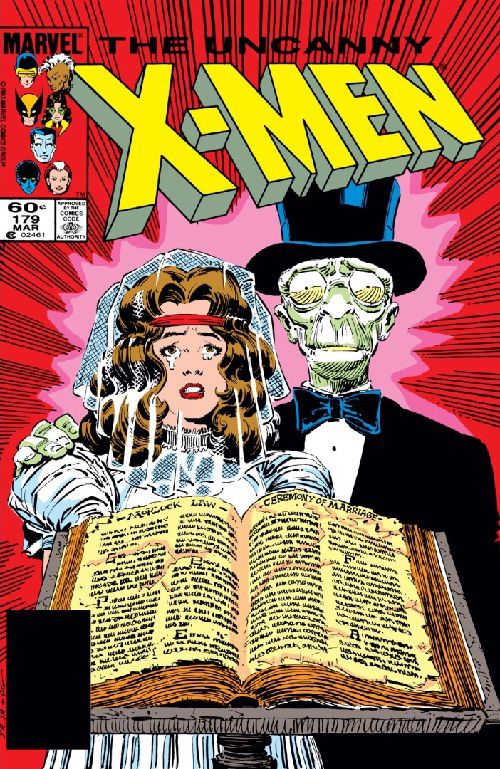 WHAT is with all these people lusting after an underage girl? In Uncanny X-Men #170, the X-Men are captured by a group of sewer-dwelling mutants called Morlocks. Kitty Pryde promises one of the Morlocks, Caliban, that she will remain in the sewers forever if he helps save her friends. Caliban agrees.

Nine issues later, the Morlocks call in the debt. They kidnap Kitty and bring her back to the sewers to spend her life with Caliban. And lest you think he just wanted a friend to talk to on those cold soggy nights, the other Morlocks set about dressing Kitty for a wedding. Callisto, the Morlocks’ former leader, prepares to officiate the ceremony.

Fortunately for everyone’s sanity, Caliban realizes that forcing someone into marriage is A Bad Thing and releases Kitty from her promise…in the hopes that she’ll return to him of her own free will someday. Look, I know the Morlocks live outside society’s rules, but the writers don’t, and their affinity for putting a literal child in such adult situations is gross.

Nightcrawler is about 90% of the reason I care about the X-Men at all. (What can I say? I was raised on X-Men: Evolution.) But man oh man, has that dude had some messed up relationships. The crowning moment of creepy came when he learned that his girlfriend, Amanda, was really Jimaine Szardos, his sister.

Allow me to explain, not that it helps. Nightcrawler was abandoned as a baby and left in the care of a sorceress named Margali Szardos, who had two biological children. All three kids were raised together as siblings. When Nightcrawler left to join the X-Men, Jimaine missed him so much that she shapeshifted to alter her appearance, changed her name to Amanda Sefton, and started dating the clueless Nightcrawler.

She couldn’t keep up the charade forever, of course. But when she revealed her true identity, everyone was just…fine with it, I guess? Nightcrawler in particular was ecstatic to see his sister again, and they continued dating for a while. I don’t even know where to start with that, so I’m not even going to try.

This is somehow the most normal couple of the bunch. Wolverine flies off on vacation in Uncanny X-Men #168, and by the time he returns to this book, he’s engaged to Mariko Yashida, the daughter of a Japanese mafioso. Already you can tell this romance won’t end in rainbows and sunshine. 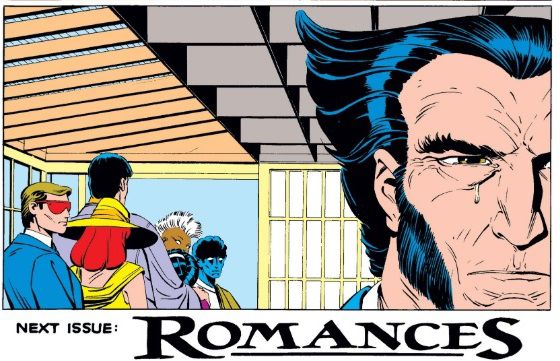 Way to rub it in there, blurb text

Sure enough, there are certain elements—besides the status quo—that want to keep Logan and Mariko apart. At the head of the list is Mastermind, who disapproves of Mariko’s plan to straighten out the family’s crooked business practices. He brainwashes her into dumping Logan at the altar. Logan responds by shedding a single manly tear.

Even after Mariko snaps out of it, she feels that it would be better for her and Wolvie to stay separated, as she wants to focus on bringing honor back to her family name. Thirty-five years later and we’re still waiting.

Like I said earlier, Nightcrawler’s true origins were something of a mystery at first. At one point, writer Chris Claremont considered revealing that Mystique, a shapeshifter, had impregnated her girlfriend, the blind precog Destiny, making them both Nightcrawler’s mothers.

But sadly, this idea never got beyond the brainstorming phase. Instead, we later learned that Nightcrawler’s father was Azazel, an actual demon. So remember, kids: Marvel says it’s okay to date your sibling or the devil, but don’t you even THINK of dating someone of the same gender. 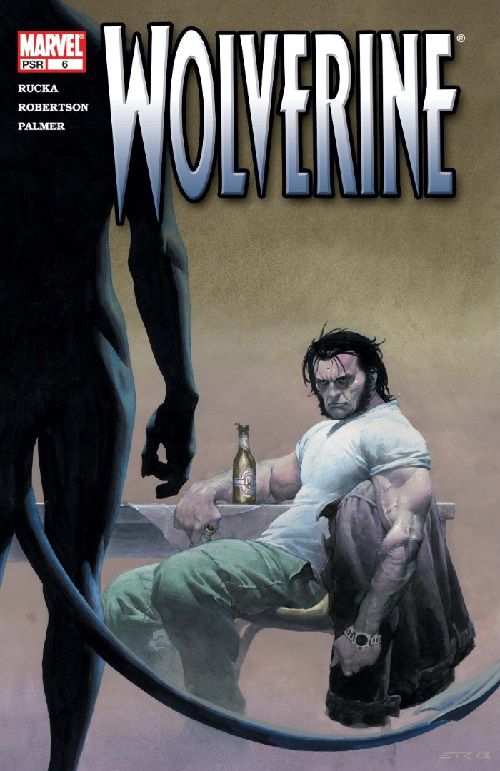 Is that a beer bottle or are you just happy to see me?

And there you have it, a quick and dirty rundown of the X-Men’s messiest and most mystifying match-ups. Be glad I didn’t go any further back than the ‘80s, or I’d have had to talk about Professor X’s crush on the teenaged Jean Grey. Now if you’ll excuse me, I need to cleanse my brain by staring at this totally-not-based-off-a-porno Wolverine cover. Ah, sweet catharsis…