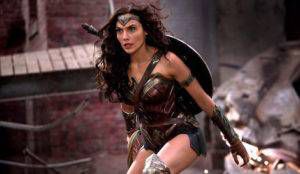 Wonder Woman brought in more than $750 million worldwide this past summer, and has long been a favorite DC character. The millions of people who flocked to the theater to see it, and the overwhelmingly positive response to (finally!) a movie about a woman that wasn’t set in the male gaze should have made it clear that the times most certainly are changing.

So why is one part of Diana’s personhood—her bisexuality—left out? Comic book readers have long known that Wonder Woman is bisexual. In an excellent interview from September of last year, Wonder Woman writer Greg Rucka further expands on the complicated task of bringing all aspects of Diana’s life to light on the page. In essence, heteronormativity isn’t on the page in his WW run, which brings that depth to Diana and her story. Without explicitly saying on the pages that queerness exists, Rucka has created nuance, which reflects “real life,” as well. In literary circles, this is called “show, don’t tell.”

Of course Wonder Woman is bi-. I am amazed this is still a discussion.

On Change.org, there is currently a petition for Warner Bros. to acknowledge Diana’s bisexuality in the next Wonder Woman movie. Why is this important? It’s not for titillation; it’s not to pander to the male gaze. It’s because bisexual individuals are the least likely to come out, are the most likely to experience depression and anxiety, and have high rates of intimate partner violence. Bisexuality is often glossed over or ignored, and it’s important that Diana gets portrayed accurately and fully. This doesn’t mean Steve Trevor can’t stay in the storyline. But Diana is so much more than that, and her bisexuality can only deepen the character and the storyline—not to mention help raise visibility and provide young LGBTQIA people with a role model they can watch on the big screen. Gal Gadot is already supportive of the idea.

For the movie to stay silent on this would speak volumes. Your move, Warner Bros.