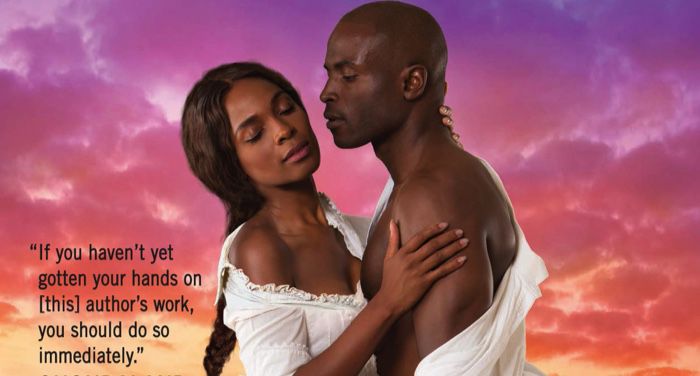 Ready for another romance full of heart and history from Beverly Jenkins? Check out Wild Rain, out February 2021, and read the exclusive excerpt below!

A reporter has come to Wyoming to do a story on doctors for his Black newspaper back east. He thinks Colton Lee will be an interesting subject…until he meets Colton’s sister Spring. She runs her own ranch, wears denim pants instead of dresses, and is the most fascinating woman he’s ever met.

But Spring, who has overcome a raucous and scandalous past, isn’t looking for, nor does she want, love. As their attraction grows, will their differences come between them or unite them for an everlasting love?

…She retrieved two forks and set them beside the bowls. He filled both bowls with the steaming mixture of vegetables and beef. Seeing that he was struggling to keep his weight off his injured leg, she picked up both bowls and carried them the short distance to her small dining table. Limping, he joined her and eased himself into one of the chairs.

To show him she did have manners, she said, “Thanks for heating up the stew.”

For a few moments they ate in silence until he said, “This is very good.”

“My sister-in-law Regan makes it for me.”

“It’s spicier than I’m accustomed to.”

“She’s from Arizona Territory. Her cooking is mostly Spanish. She uses peppers and chilis.”

He nodded his understanding. “How long have she and your brother been married?”

Spring debated answering. He was a stranger after all but reminded herself Colt would undoubtedly expect her to be nice. “A bit over a year.”

“Do you have a husband?”

She shook her head.

“Are you always this nosy?”

He chuckled softly. “Asking questions is part of the job.”

“No husband, and I don’t intend to have one.”

“Why should I? I have land and horses. I’m content.”

He eyed her as if he had more questions, but he kept them to himself. “I see.”

She asked, “Are you married?”

It was her turn to chuckle.

“That was quite the answer.”

“Either you have an intended or you don’t.

Why do some men find it difficult to answer a simple question?”

He opened his mouth as if to respond, then closed it.

But he wasn’t done. “Are you one of those women who thinks poorly of all men?”

“No. I know some who’re good as gold and others I’d not turn my back on. Not intending to marry either kind.”

“Society thinks a woman should marry.”

“Good thing I don’t live by what society thinks. Otherwise, I’d’ve married the lecherous old snake my grandfather tried to shackle me to when I was eighteen. Probably be out of the penitentiary by now though.”

He stared. She returned to her stew. Although he kept further questions to himself, there were unasked ones all over his brown-skinned face.

They finished their stew at about the same time. “Do you want more?” she asked.

He nodded and made a move to rise. She stopped him. “You’re still favoring that leg. I’ll get it.”

She brought their second helpings back to the table, acknowledged his thanks with a short nod, and asked him, “Did the tea help?”

“There’s more if you want it.”

“I do. Maybe after I finish this.”

“Understood. Is that one of the remedies your brother uses?”

“Along with everyone else out here. My brother trained at Howard’s Medical School. Don’t write something wrongheaded and insulting about him using so-called savage concoctions.”

She knew he was making a joke, but his face was so serious, she was thrown off her stride for a moment. “What do you do back in Washington besides ask a lot of questions?”

“I read for the law at one point, but the newspaper is a sundown paper, so I make my living as a carpenter.”

“The editor works on it in the evenings after his day job. My father owns the paper and I help when I can. He couldn’t take the time off work to interview your brother. I volunteered to make the trip instead.”

“So you work as a carpenter and not a lawyer?”

“Yes. I prefer working with my hands.”

Her eyes settled on them. They looked strong and capable like most men she knew, except for maybe banker Arnold Cale. His hands were as pink and pampered as a lady-in-waiting to Queen Victoria.

He’d apparently viewed her hands, too. “What happened to your finger?”

The top of her right index finger still bore the ugly black bruise from a hammering mishap. “Hit it with a hammer instead of the head of a nail.”

“Yes. I cussed a lot, but it’s healing.” She flexed the battered finger. “Not the first time. Probably won’t be the last, either.” Lady ranchers didn’t have pink and pampered hands.

“I’ve never met a newspaper reporter carpenter. Makes us even.” Spring didn’t mind the conversation, but she didn’t want him to think her being friendly was an invitation to something else. He was a stranger after all, and she was a woman alone. “Do you have a sister?”

“What would you tell her if she took in a strange man and they had to be alone together for a few days?”

He stilled and searched her face. She waited.

“I’d—I’d tell her to be watchful and careful, and to be ready to protect herself if need be.”

Silence settled over the room for a few moments, before he said quietly, “You’re a very unique woman, Miss Lee.”

“I also sleep with a Colt Peacemaker.”