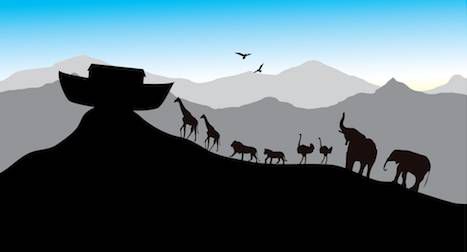 Confession: I have a thing for Noah. (It’s totally the beard.) I love Noah-related art, too; it’s sprinkled throughout my home and hangs above my desk at work. The more fanciful, the better—one print renders Noah a patchwork pilgrim, which is both absurd and the best.

I’m not a literalist; my favoritism with this biblical tale is more literary than devotional. I love its editorial complexity, for one—because there are two iterations of the tale there, woven together not entirely seamlessly, but with enough skill that most people mistake Noah for a single story. (See Richard Elliott Friedman’s Who Wrote the Bible? for more on this.) I love that it shamelessly borrows from other traditions; to me, that makes it feel like not just a monotheistic story, but a human one. And I think it’s a fantastically drastic way to explain natural phenomena–total credit for creativity. There’s a lot there to admire, construction-wise.

And, okay, I kind of appreciate that it’s so misused. The way Noah enters our culture is just odd—inappropriate, even. Who decided that a Bible story about God going genocidal on humanity should be the go-to for biblical picture books, stuffed toys, and nursery artwork?

“This would be perfect for a kid’s room,” a salesperson cooed over my last purchase; truly, I think that a few framed IT posters would be less nightmarish. Clowns over brutal drownings any day.

What makes human beings take a story so dark—rife with sin, punishment, reprievelessness, burnt sacrifices, and catching depressed Dad naked and drunk in a cave—and fancy it up with bright colors, slap some smiles on animal pairs, and call it bedtime fare? Does a grinning giraffe really erase the horror of that story? Does a cheerful two-by-two rhyme make it less brutal?

I’ve done the dance, I guess—teaching Noah in Hebrew school settings (though with an origins edge!), even gravitating toward the children’s books with delighted animal buddies myself. But boatbuilding in the sun, cozy Noah, cheerful bunnies hopping up a gangplank: none of that really gets the story right.

Is there no better way to introduce children to the Bible than by fancying up one of its darker stories? Noah is not a day at the zoo; Noah is a merciless erasure taken to the human storyboard, is killing one’s darlings taken to the extreme, is as forty-days-of-bleakness dark as you can get.

Sure, there’s the rainbow at the end—the promise of “never again,” a colorful sign of divine love. But that’s the effect in the story, and it’s hard to address without also mentioning the cause. Little ones are probably still going to ask why Noah and his menagerie up and decided to take an extended cruise, and there’s no pat answer for that.

Is Noah perhaps a story that adults should keep to ourselves, and off of bedtime story shelves?