The literary world can be a tumultuous and tenuous sphere, full of people who are ready and willing to opine on the merits or lack thereof regarding a piece of work. (For confirmation, check out the comments section of any vaguely debatable literary article on the Internet). The fact is, most authors, critics, bloggers, readers – really anyone that avidly reads and writes – are attached to the books they believe in.

Of course, writers in particular are exposed to widespread criticism, and disagreements can get heated rather quickly. Whether it’s Norman Mailer and Gore Vidal exchanging fisticuffs at an awards ceremony or Jennifer Egan hating on chick lit (since rescinded), there’s a fuck ton of shade thrown around between authors.

A lot of the most famous cases seem to revolve around two intellectual dudes trying to decide which of them is doing service to literature (e.g. Brett Easton Ellis throwing shade at DFW), but I’ve skipped over a lot of those here as they’re covered in much detail in other places. Bros will be bros. I can only hope that someday a brilliant writer hates on my novels and choice of tanktops.

If Murakami doesn’t win the Nobel Prize for Literature soon, I feel like a readers’ riot is in order. When Japanese books were pulled from Chinese bookstores in 2012 due to disputes over the Senkaku Islands, Murakami chimed in with what is likely the most polite shade of all time. In a short essay, the writer discussed the vast importance of international culture, comparing frivolous feuds to drinking to excess:

“Anger-fuelled disputes of this kind are not unlike getting drunk on cheap liquor- we become intoxicated very quickly; our voices grow loud and our words rash. Our behaviour can turn violent, and our way of thinking, although usually so calm and logical, becomes simplified, relying on our base instincts. We start to fixate on our innermost feelings and desires, repeating ourselves over and over, without allowing any room for logical thought.

But when the rioting has stopped and shouting has died down, all we are left with is an almighty hangover.”

When Zadie Smith published White Teeth in 2000, critic James Wood coined the term “hysterical realism” in a review for The New Republic. In October 2001, Wood published an essay bashing the genre he invented titled “Tell me how does it feel?” Smith’s reply to the critic’s sharp remarks exhibited shade in a most brilliant form – brutal self-analysis.

Her response, candidly titled “This is how it feels to me,” deemed her own work as “overblown, manic prose.” Without flinching she discussed the dilemma facing every writer- she addressed the haunting question of literary importance. After explaining her fear, the real horror of clacking away at the keys, she questions:

“I wonder sometimes whether critics shouldn’t be more like teachers, giving a gold star or a black cross, but either way accompanied by some kind of useful advice. Be more human? I sit in front of my white screen and I’m not sure what to do with that one. Are jokes inhuman? Are footnotes? Long words? Technical terms? Intellectual allusions? If I put some kids in, will that help?”

These two literary giants had a feud that lasted more than three decades. As legend has it, both men – who were at the the time longtime friends – were at the premiere of a film in Mexico City. After the feature ended, García Márquez went to embrace Vargas Llosa, when he was surprised with a sucker punch that gave him a black eye. Apparently, García Márquez had consoled Mario’s wife while the couple was having a spat in Barcelona. The two didn’t talk for for the next 31 years. Not so much throwing shade as throwing fists, but definitely worth a mention.

After Whitehead drilled Ford’s short story collection, A Multitude of Sins, in The New York Times, Ford spit on him at a social function. That’s pretty fucked up. However, Whitehead’s response was on point:

“This wasn’t the first time some old coot had drooled on me, and it probably won’t be the last. But I would like to warn the many other people who panned the book that they might want to get a rain poncho, in case of inclement Ford.”

V.S. Naipaul has a pretty felicitous initials for getting in a literary feud. The Guardian has referred to these two as nemeses, but also notes that for most of their careers their dislike was tepid (on the surface, anyway). Naipaul panned Walcott in his book, A Writer’s People, essentially claiming that his contemporary was washed up. Walcott responded by reading a poem at Calabash 2008 titled “The Mongoose.” The poem is full of shade, and Walcott has even been known to refer to his rival as V.S. Nightfall. Both men have won the Nobel Prize for literature, so you know they’re capable of throwing some topnotch shade. 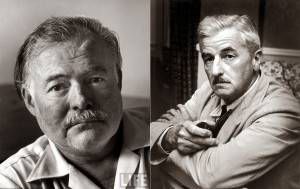 Ernest Hemingway Vs. William Faulkner (and everyone else)

Papa wasn’t exactly known for his mild temper. He was an avid pugilist, and certainly didn’t hesitate to go a couple rounds (verbally or physically) with anyone else who was willing. However, the best shade Big Hem ever threw was in response to a diss by Faulkner.

When asked about Hemingway, Faulkner stated, “He has never been known to use a word that might send a reader to the dictionary.”

This seems a valid point, but Hemingway burned his contemporary with the simple reply, “Poor Faulkner. Does he really think big emotions come from big words? He thinks I don’t know the ten-dollar words. I know them all right. But there are older and simpler and better words, and those are the ones I use.”
____________________