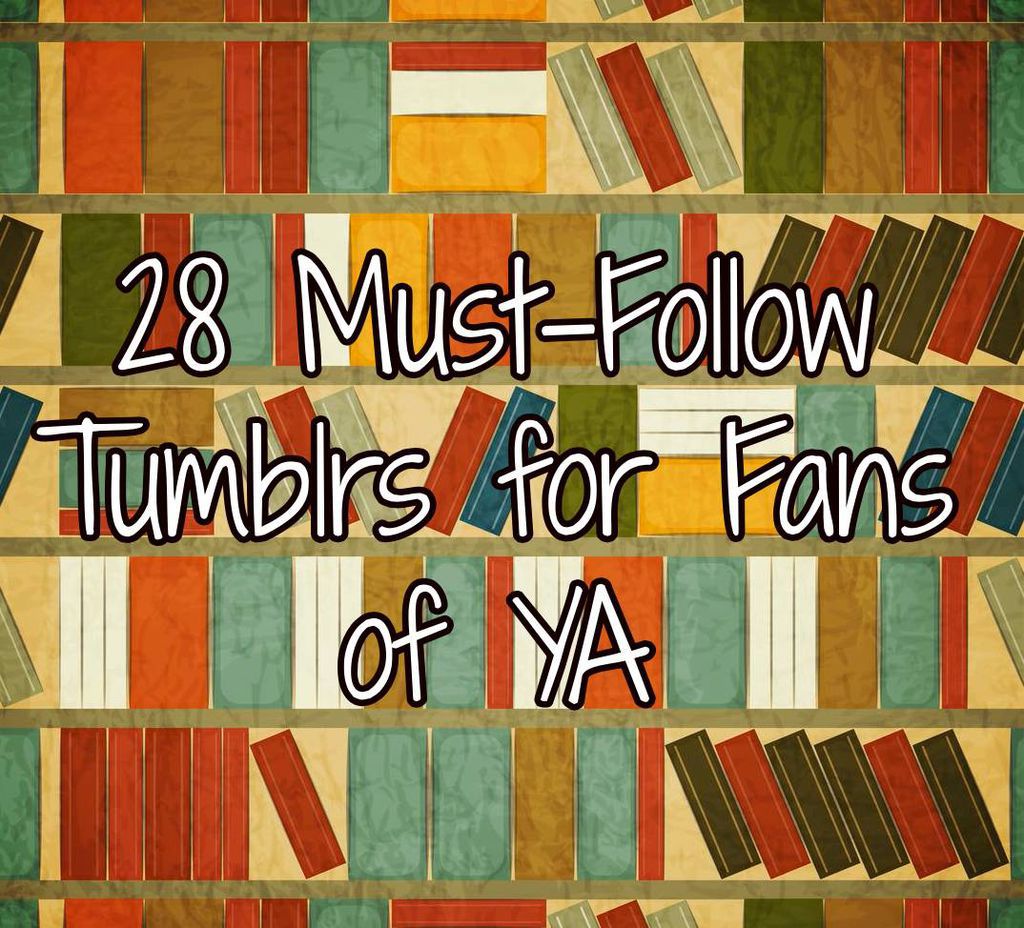 You like YA. You like Tumblr. Or maybe you want to get into Tumblr and don’t know where to begin. There’s so much out there, and it’s not always easy to follow or discover on your own. While Tumblr itself as a platform is great and a lot of fun, there’s a learning curve to it.

One of the more enjoyable aspects of Tumblr is that after you’ve built yourself a solid set of Tumblrs to follow, you’re able to discover more via what your followers are reblogging. You pick up on new and interesting things to follow. But the challenge is getting yourself a set of strong to-follows in the first place.

Christy featured a nice array of bookish Tumblrs recently, including some of the YA heavy hitters, but I wanted to offer a look at some of the best YA-specific Tumblrs out there, since finding the good stuff can feel overwhelming. To wade you in even easier, I’ll highlight some of what I think the best features of these particular Tumblrs are. Roll up your sleeves and get ready to get following.

YA Highway keeps a large list of YA authors who are on Tumblr, but I think it’s valuable to pull out a small number of individual YA authors who are doing great things with their Tumblrs. The most interesting authors to follow on Tumblr are the ones who talk about a wide range of things beyond their books. I want to be intrigued enough by what they talk about beyond their work that I don’t have to be familiar with it to get something out of their Tumblr.

Like to work out your brain? In addition to being a YA author, Jennifer’s a psychology professor who studies fiction and how people interact with it, so her Tumblr is full of smart commentary about reading. She’s great at answering questions she gets and offers depth to the whys of how people read and what that might mean.

Malinda is part of the team behind Diversity in YA (see next section), so it’s not a surprise her personal Tumblr is also great. She’s really responsive to asks, and many of them will put a ton of new books on your to-be-read piles.

Ellen is one of the voices behind the #WeNeedDiverseBooks campaign, and her Tumblr is a really great follow because her passion for diversity, for feminism, and for social issues beyond the book world, but which impact the book world, are on display.

If you want to ask a writer a question about anything writing or reading or life related, Courtney’s going to get back to you. She’s got a massive writers resource guide. Also, if you are interested in hearing about YA books and why you should pick them up with a side of video games, then Headcrab Recs is your gold.

His blog is great, his Twitter is great, and his Tumblr is an extension of that greatness. There’s a little bit about his work, a little about writing, and a lot of fun reblogs and shares from across Tumblr.

A lot of good Tumblrs happen to be coordinated by multiple people, which means they offer up a lot of perspectives and content worth reading. Many of these also happen to be spin-offs of on-going projects or a more social component of bigger web sites.

How is disability rendered in kid lit? When is it done well and when is it done problematically? Their ask box is open for good reader interaction.

This may be one of the most valuable Tumblrs around for YA readers seeking to diversify their reading and understand why diversity is so important. Their booklists and the upcoming release lists on the right-hand side of their Tumblr page are excellent resources. There’s a great wealth of voices and perspectives represented.

Here’s your one-stop Tumblr shop for all things LGBTQA+ YA. What’s particularly special about this Tumblr, besides what it covers, is that it’s run by three teenagers.

Another more than worthwhile Tumblr dedicated to highlighting work by and about people of color. This Tumblr spotlights each week’s new diverse YA books.

The #WeNeedDiverseBooks campaign is still going strong. This summer, they’ve been doing a great series of book recommendations, pairing a well-known or popular book with a diverse book that should be equally appealing. Those can all be found here.

YA Flash is particularly good community-building Tumblr, run by YA author S. E. Sinkhorn, focused more reblogging than creation of original content. But those shares are always interesting and engaging.

You may know YA Highway from their website — run by a pile of published and unpublished authors — but they’re also doing great things on Tumblr. They’re big on reblogging and sharing from across the Tumblr world, meaning you’ll see very little of their own content (though they answer reader questions) and you’ll get to see a wide swath of stuff.

If you’re a fan of short-form fiction and YA and don’t know about YARN, you should. They publish short stories and poetry for YA readers by new and established YA writers. They’re big rebloggers as well, which will give you an even deeper taste of the YA Tumblrsphere.

It doesn’t seem like the adult side of publishing is as tuned in to Tumblr yet as some of the YA publishers are. While teens are using Tumblr like crazy, it’s odd more adult publishing hasn’t reached out, too, since plenty of younger adults are using it. Here’s a look at a few of the publishers worth a follow on Tumblr because they’re not only talking about their own books, but they’re also sharing info on all kinds of books and displaying a passion that extends beyond themselves.

More and more libraries are on board with where their younger readers are and as a result, they’re hopping on Tumblr. What’s great about library Tumblrs is that when they’re talking about books, it’s always a mix of titles. Librarians know how to make book recommendations and how to jump onto a topic of interest and offer good reading for it. Since Tumblr is so visual, a lot of these happen to be very graphically-driven (making them more fun).

Book recommendations and book lists galore. There’s a mix of YA and adult titles that should appeal to YA readers, as well as graphic novels and comics.

Much of what this New York Public Library branch’s Tumblr is reblogged, but it’s fresh, interesting, and almost entirely book-related. They do write some of their own reviews, including a “Reluctant Reader Wednesday” series, which talks up books that those who don’t always like to read might enjoy.

Their teen book lists are some of the best around. They’re not only on point, but they’re really timely and they’re forward-looking: you’ll get books that aren’t even out yet on your radar months beforehand.

While this Tumblr is more library-oriented and more focused on the Sno-Isle system (so maybe it’s more for librarians reading this who are looking for “what can I do with a library Tumblr?”), I’m including it because of the really fun things they’re doing with books and readers. They’re doing book facing, creating book covers in LEGOs, and more. They pop in book trailers, as well.

Book reviews (many written by teens), book lists, fan casting, and general book love. This has a good mix of talking about old and new books. Maybe one of the most fun features is their “Read This, Watch That,” which pairs books with thematically-similar movies.

What about some other great YA-focused Tumblrs? These four are all very different but their passion and interests in and for YA make them more than worth a follow.

The Art of YA

One passionate YA reader is turning her favorite scenes from books into art and she’s pretty damn good.

Fashion By The Book

Outfits inspired by book covers. Many of these creative fashions are based on YA books and it’s neat to see how one image can be translated into another medium.

Sexual Violence in YA

I wouldn’t call this Tumblr a fun one, but it’s a necessary one. This project, spearheaded by a librarian and three YA authors, explores sexual violence as it is rendered in YA fiction. Educational, insightful, and, I think, a must-read for those who work with teens readers.

YA Interrobang, which is an all-YA magazine, has a great Tumblr component, complete with new release updates and thematic booklists.