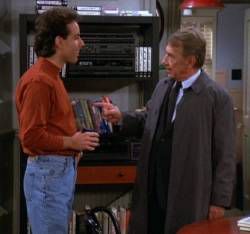 From “yada yada yada” to “master of your domain,” Seinfeld unleashed more while-you’re-drinking-with-buddies quotable idioms than just about any other sitcom ever. The “show about nothing,” which ran from 1989 to 1998 and is still in heavy rotation in syndication, was also one of the smartest sitcoms ever to grace our airwaves. One way this “smartness” manifested itself was in references to literature and/or books, ranging from subtle to hilariously overt. Here’s a Top 8.

8. “You can stuff your sorries in a sack, mister,” says George, frequently (and hilariously!), in the episode most people refer to as The Backwards Episode. It tells the story, in reverse chronology, of a trip to India for a wedding. But the episode is actually titled “The Betrayal,” referring to a play by British Nobel Laureate Harold Pinter titled Betrayal, which also unfolds backwards. Additionally, in the Seinfeld episode, the name of the groom is Pinter Ranawat.

7. In the episode titled “The Implant,” in which Jerry asks Elaine to find out if, um, they’re real (unleashing the iconic line, “They’re real, and they’re spectacular.”), Kramer claims to have seen Salman Rushdie in the same health club. Elaine laughs and says, “Yeah right, Salman Rushdie. Yeah well, I can see that — you got five millions Moslems after you, you wanna stay in pretty good shape.”

6. Not a specific literary reference per se, but you gotta love Kramer going on the Regis and Kathie Lee Show to hawk his coffee table book about coffee tables. And, if you don’t have a coffee table, the book itself can fold out into a coffee table!

5. Little-known fact: It was the father of George’s fiancé Susan who was John Cheever’s illicit-affair-mate! Didn’t see that coming, did you? Of course, this is satirizing the famous Cheever letters — published after Cheever’s death in 1982, and revealing his bisexuality and long affair with a man. Really out of left field, this reference — which is what makes it so funny. 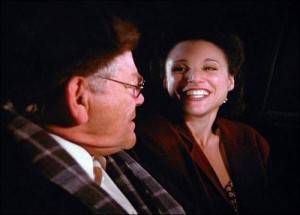 4. Another little-known fact: Leo Tolstoy’s original title for War and Peace was War, What Is It Good For. That, according to Elaine (via a joking-around Jerry), as she tries to impress her boss and make conversation with a grouchy Russian writer named Yuri Testikov. Testikov explains that Tolstoy didn’t need inspiration – “God spoke through his pen.” And Elaine counters with this gem: “Although one wonders if War and Peace would have been as highly acclaimed as it was, had it been published under its original title War, What Is It Good For.”  The grouchy Testikov doesn’t take kindly to that assertion.

3. George gets a job with the Yankees, partially by lying on his résumé that he’s a “risk management expert.” So before he gives a presentation to Steinbrenner on his area of expertise, he has to read up on the subject. But he keeps falling asleep, claiming he can’t read anymore because books on tape have ruined him — he needs “that nice voice. This book has ‘my’ voice. I hate my voice.” So, George endeavors to find the text book Risk Management on tape from Books for the Blind — but the guy reading the book sounds just like George, too! Again, not a specific literary reference, but don’t you think if Seinfeld were still around now, they’d do a send up of ereading and the fear around traditional publishing?

2. This quote, from Jerry: “You know, when you read Moby Dick the second time, Ahab and the whale become good friends.” Context: Jerry tells George that it doesn’t matter if he leaves books at a newly-ex-girlfriend’s apartment, because he read them all, and what’s the point of re-reading?

1. Tropic of Cancer and Tropic of Capricorn, the naughty tomes by Henry Miller, are the comedy cornerstones of an entire episode! When a library cop named Mr. Bookman hunts down Jerry for a 20-year-late library book, Jerry and George argue about whether they actually returned the book in high school. Jerry vividly remembers returning Tropic of Capricorn and loaning Tropic of Cancer to George. Also, Kramer begins dating the naughty librarian. This is one the best Seinfeld episodes of all time, concluding with Bookman’s impassioned speech about libraries:

“Let me tell you something, funny boy… You know that little stamp? The one that says New York Public Library? Well, that may not mean anything to you, but that means a lot to me. One whole helluva lot. Sure, go ahead, laugh if you want to. I’ve seen your type before — flashy, making the scene, flaunting convention. Yeah, I know what you’re thinking: Why’s this guy making such a big stink about old library books? Let me give you a hint, junior. Maybe we can live without libraries, people like you and me… Maybe. Sure, we’re too old to change the world. What about that kid, sitting down, opening a book right now in a branch of the local library and finding pictures of pee-pees and wee-wees in The Cat in the Hat and The Five Chinese Brothers. Doesn’t he deserve better? Look, if you think this is about overdue fines and missing books, you’d better think again. This is about that kid’s right to read a book without getting his mind warped. Or maybe that turns you on, Seinfeld. Maybe that’s how you get your kicks. You and your goodtime buddies… I’ve got a flash for you, joy boy. Party time is over!”