With the approval of Douglas Phillips, #SFWA has engaged Eleanor M. Lackman from the law firm Cowan DeBaets Abrahams & Sheppard to file an opposition to prevent registration of the trademark “quantum series.” #cockygate #quantumseries

This was the first I’ve heard of “Quantum Series,” so I did a little bit of digging in the Trademark Electronic Search System (TESS). The trademark for “Quantum Series” as a series of downloadable books and audio books was filed on January 22 this year by HTJB, Inc. 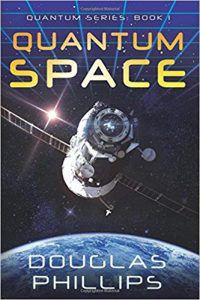 HTJB, Inc is a company that belongs to romance author Marie Force, who indeed has a series (her first in erotic romance) called “The Quantum Series.” Considering that #quantumgate isn’t yet a thing, I’m going to guess that Marie Force hasn’t been engaged in any of the bad behavior that got Faleena Hopkins so much attention—and I’m certainly not going to assume that she would, if awarded the trademark. But SFWA’s interest in this trademark is pretty obvious; science fiction writers sure do love their quantum stuff…and as a matter of fact, there’s at least one science fiction Quantum Series already, starting with Quantum Space by Douglas Phillips, published on April 13, 2017.

One would certainly hope there’s enough quantum to go around.

It’s worth noting that this particular trademark was filed months before the entire #Cockygate happening, so it can’t be blamed on ripple effect. But any way you slice it, in the wake of Faleena Hopkins’s abusive pursuit of her trademark, it’s safe to say that people are now paying very close attention and guarding against a potential repeat.

And on the other hand, there are the trademarks being filed in the wake of #cockygate that really just make you scratch your head and think, really? Like the guy who filed to register Dragon Slayer, because sure, no one’s used that before. I’m not sure if this “trademark everything” behavior is normal in spheres of publishing I’m unfamiliar with; from my perspective as a traditionally published writer, though, it seems weird and…grabby. Ultimately it’s good news for science fiction writers (and the readers who love them) that SFWA is paying attention (and following the lead of the Romance Writers of America), because the trademark toothpaste is out of the tube and there’s no squeezing it back in.

(Full disclosure: I am a member of SFWA. I also had nothing to do with the above decision and only heard about it because I follow SFWA on Twitter.)