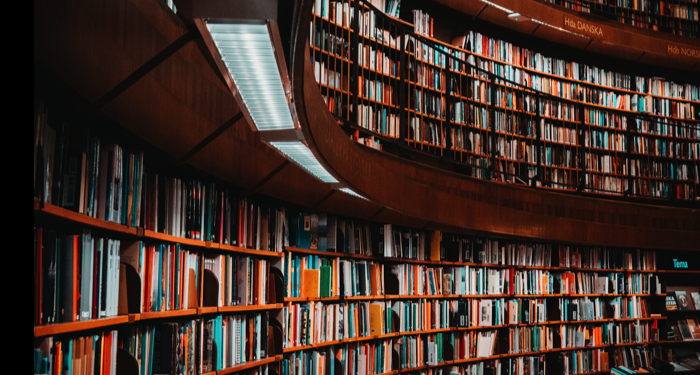 During small talk not long after meeting someone new, inevitably the question “So what do you do?” comes up. When I tell them I’m a librarian, more questions follow. Usually the same ones over and over, such as, “Do people still use libraries?” or “Aren’t you worried about becoming irrelevant?” or “Are you worried about libraries disappearing?” I never get asked what advances libraries are making or where I think libraries are headed. The questions always have a negative bent.

The future of libraries is not something I’m worried about. They’ve been around longer than our modern memory likes to consider. Libraries have a long history, 5,000 years–type of long. Yet people worry about them because of modern developments in technology like the internet, computers, and smartphones. The internet is 40 years old, computers less than 80 years old, and smartphones have been around for only 30 years. It’s bold to think that these advances would eliminate libraries rather than advance them.

Libraries are aware of where the world is going. Take the pre-pandemic shift to digital resources, for example. Hoopla, OverDrive, and the Libby app have revolutionized how libraries are able to offer digital resources to their patrons. These digital resources help libraries’ circulation numbers. Now, through these apps, people can download magazines, ebooks, and audiobooks to either read directly in the app or to be sent to an ereader. Hoopla allows people to stream movies and music through the app as well. My local library has recently developed their own app so users can browse the catalog, check on their holds, and keep apprised of events and storytimes. It even has a map feature that helps you locate the library nearest you. The library looked around at the world and their patrons, saw a need, then filled it. Smaller, county libraries like mine are finding places in their budget to expand digitally.

Technology is at the forefront of libraries’ future. They understand that technology is going to be an integral part of their usefulness going forward. Many libraries are setting up things like makerspaces and recording studios. Not only are these spaces offered, but classes with professionals from the community are available to teach patrons how to use these spaces effectively. If you want to start your own podcast, rather than sinking a ton of money in what might be a passing hobby, check out your local library. They are offering podcast equipment, professional lighting, and green screens. Often, these makerspaces have recording in mind and are set up to absorb sound. If the thing holding back your blossoming TikTok career has been bad lighting, the library has you covered. Not only do they have a space where you can record if you want, but they also have tripods, cameras, and microphones available for checkout that you can take home to refine your craft. More and more libraries are offering these and will continue to expand these programs going forward.

Makerspaces are far beyond what they once were and continue to redefine themselves as time goes on. These are no longer only arts and crafts types spaces with colored paper and beads, although those still exist. They’ve upped their game by adding sewing machines, tools for fine jewelry making, woodworking, and metalworking. Some makerspaces are focused specifically on robotics and CAD design with 3D printers. There are stations to learn coding and 3D carving machines. If you get stuck, then there are librarians available to provide you resources on what your next steps should be, whether that’s a book, YouTube video, or online tutorial. You’re not alone in learning a new skill.

Speaking of physical spaces, libraries also provide flexible spaces free of charge to community members. They are the original coworking spaces. People can reserve conference rooms, work in study areas together on projects, and provide quiet rooms when times of intense focus are needed. They are usually large enough to house town hall meetings and meet up gatherings. Libraries think about patrons with disabilities and are mindful about ensuring they have access to the physical space. The Inclusive Library Initiative enhances access for people with developmental disabilities by creating inclusive spaces. Some libraries have even created sensory rooms to create a calm place for multi-sensory experiences for children and their families.

We haven’t even gotten to programming. Libraries provide programming on everything from robotics to bird watching to help with taxes. Programming is a place where libraries can expand in the future. The possibilities of what kinds of programs are offered are only limited by librarians’ and patrons’ imaginations. If you can think it up, and we can think of a way, there’s nothing stopping a new program from being created.

But it’s not just about what libraries have; it’s about who they serve. Libraries are well known for fostering safe spaces for marginalized people. One of the biggest marginalized communities libraries help are the unhoused. Homelessness increased in 2020, making this community even larger. Libraries give unhoused people daytime shelter, offering air conditioning in hot weather and heat during the colder months. Many shelters who offer overnight accommodations don’t provide the same services during the day. While in the library during the day, people can search and apply for jobs, read, and take part in programming.

Another marginalized community libraries help are immigrants and English Language Learners. The Hartford Public Library, for instance, has a program called The American Place (TAP) that “provides industry recognized certificate training, GED preparation services, English as a second language, and a nationally recognized U.S. Citizenship program, supporting immigrants in achieving citizenship and becoming vested citizens.” Navigating a new place where you don’t speak the language is daunting to say the least. Libraries give people learning English a place to start, and a person to connect with who will help them navigate difficult-to-understand documents.

The American Library Association has core values of librarianship in the Library Bill of Rights, The Freedom to Read Statement, and the ALA Mission Statement. Chief among these core values are the right to access information, the right to privacy, democracy, and diversity. Libraries pledge to promote the creation, maintenance, and enhancement of a learning society to foster informed citizenry. They defend intellectual freedom and fight against censorship, in order to help preserve the public good. The ALA recognizes its broad social responsibilities by committing to serve its patrons to the best of its ability through professionalism and mindful sustainability practices. Keeping these values in mind, it’s easy to see a future of libraries defending our values as well as the rights of our patrons.

In supporting the rights of patrons, specifically the LGBTQ+ community, some libraries have come under attack . Libraries that host drag queen story hours and some that merely housing LGBTQ+ materials have been targeted with things like loss of funding. Luckily, people have fought back. People like novelist Nora Roberts , who donated $50,000 to keep a library in West Michigan open after their funding was pulled for refusing to discard LGBTQ+ materials. A place she was able to donate to because a GoFundMe was created to keep their doors open. Fighting for the right for all people to have free access to uncensored information is not going to stop. It is a core value of libraries. Going forward, this movement is going to expand.

Librarians are at the forefront of these issues. They are no longer only guardians of knowledge, they are event coordinators, tech help, community caretakers, researchers, database maintainers, teachers, authors, budget analysts, grant writers, designers, fundraisers, media specialists, content creators, archivists, and communication specialists. I haven’t even scratched the surface of academic or corporate librarians.

We have to be factotums. Flexibility is key to our ability to thrive and support our communities. Libraries are flexible and have been for many years. The pandemic is a perfect example of this elasticity. Libraries all over the country shifted their services to better serve their communities. Curbside pickup became more widely available. Libraries were checking out hotspots, seed packets, and make-and-take kits. There were virtual storytimes, events, and book clubs. Call centers formed to support patrons who weren’t comfortable with digital resources, but still needed information. “Business” for the library boomed.

The future of libraries is bright, despite everything. Yes, there are book bans and challenges. Yes, there are funding issues. But there are also citizens who show up to town hall meetings to speak out against censorship, and libraries that continue to look towards the future in terms of technology and making their spaces as accessible as possible.