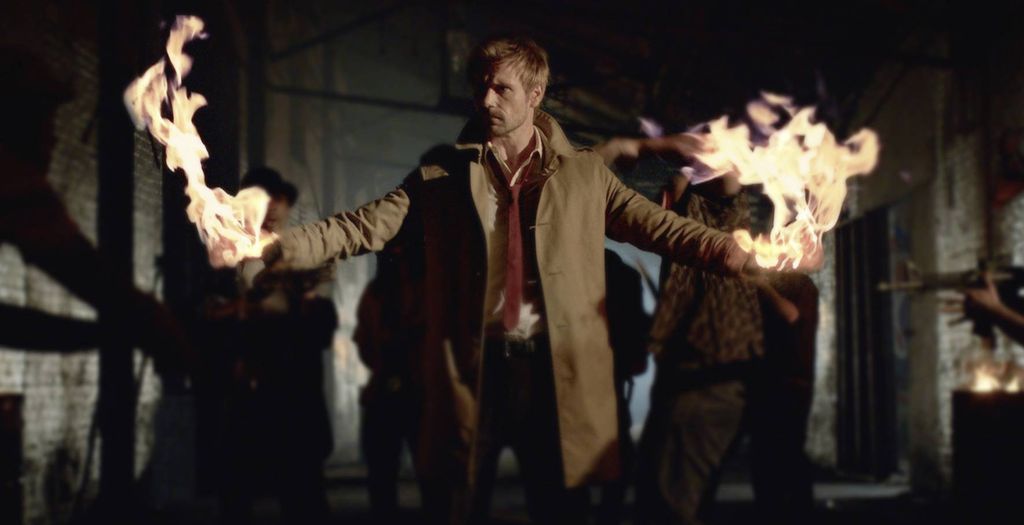 This is John Constantine. Leave your name and soul, and I’ll get back to you.

Hey, Johnny. It’s Sid. Listen, I need you to meet me at the crossroads at midnight with some chalk, a potato and a monkey’s foot. And, listen, do you have that twenty I lent you?

Both David Accampo and Jay Stringer were fans of John Constantine, and the comic series Hellblazer. They will be discussing each episode of the new NBC show, Constantine, and assessing the good, the bad, and the demonic. Before watching the show, they take a moment to discuss their expectations in this special “zero” edition of “The Constantine Files.”

JS: It’s going to be interesting to see them try and bring John Constantine to network television. It will some very difficult – and very clever – choices in the adaptation process. One question first of all, what made you stick with John all these years? What aspect of the character kept him fresh and interesting for you?

DA: That’s an interesting question. I suspect what initially drew me to the character, and the aspects that kept me invested in him are two different things.

The former is clearly what got him a TV deal. NBC’s John Constantine is, on the surface, one of my weaknesses – I love mystery stories where the world begins as our world, but we quickly learn that the Monsters in the Closet are actually real… and there are ramifications for knowing that. But even more than that – I have a weakness for characters who Know More Than You Do.

And that’s another classic element of Constantine – he knows just enough to be dangerous, but he still seems caught up in mysteries of the dark that are just over his head.

But what you’re really asking me here is about what’s kept me invested. And now we’re getting into the nuance that, as of this writing – prior to the first episode – we can’t predict. I guess one of the things I like about the DC/Vertigo comic book version of John Constantine is that in spite of all of these trappings, he’s a fundamentally human character. He makes bad choices; he hurts those he loves. He operates from his own moral compass, driven by guilt and righteousness and that aforementioned little bit of knowledge. And over the course of 300 issues of Hellblazer, we got to grow up with this character, watching him age, watching relationships begin and end. At the end of the day he felt like someone I might know… his demons were just a little more literal than the rest of ours.

So, back to you: you mention “clever choices” in adapting this character to TV. What do you think needs to be there to make Constantine work in the same way he worked for you in the comics? What’s at the core of the comics character, and what makes him different from similar characters who have littered the TV landscape?

JS: It’s tricky. I think the defining trait of the character for me is his dishonesty. John is essentially a con man. He’s not a loveable rogue. He’s a liar. He’ll lie to his friends just as much as his enemies. He hates bullies and authority, and so in the overall scheme of things he comes out on the side of right, but it’s almost by default. That character can’t really be the leading man on a network TV show, and I can understand why. So the smart choices will be in how they can show the essence of him while still creating a lead character.

I think what you picked up on – that he feels like someone we might know – I think if they can capture that, I can forgive a lot of the other things. He’s not an everyman character, he’s not relatable in that sense, but he is someone who we know, and if they can make him feel like a guy I could meet walking down the street, but with slightly more dramatic problems waiting for him, then it’ll be a start. And if he doesn’t always get it right, of he acts selfish sometimes or makes the wrong decision, if the episodes don’t all wrap up neatly. It might not be Hellblazer, but I think there is a version of John Constantine that can work in this format.

Now, if they can just get him to say his own name correctly…..

DA: Hah! OK, so we’re now referencing the fact that Alan Moore, who created John Constantine in DC Comics’ Swamp Thing, pronounces the name “ConstanTYNE,” while the character on the TV show pronounces his name “ConstanTEEN.” That’s long been a marker for the true Constantine fan, hasn’t it? But ultimately – if you’ve never read the comics, does it matter?

I’ll answer my own question: it only matters in a couple of small ways. First, it’s a sign to guys like us. It says, “Hey, we get it. We’re paying attention to the details.” But that’s really a token. The more story-centric reason would be that John is that he’s probably the most authentically working class British character in comics.  The accent isn’t just so that he sounds “cool” to American audiences… the proper accent is the starting point of John’s whole story. I would make this suggestion: readers who are curious about John Constantine should check out first volume of Hellblazer, entitled Original Sins. Love it or hate it, I think you get a sense from these first stories of a character who is absolutely a product of the 60s-70s-80s Britain. That aspect always intrigued me when reading the comics, as it gave me a chance to see a truly different point of view. For this American teenager, it was as mysterious as demons and the underworld.

JS: I also think they’ve missed a trick for humor, and to really help get his stubborn nature across. It’s understandable that people say the name the wrong way. Firstly because it’s an odd name but also because, as far as I know, “Constanteen” is usually considered the correct pronunciation for other people with that name. Moore says it the way people in our bit of England do (I grew up about 60 miles from Moore.) But it could have become a fun running joke, people getting it wrong and John correcting them, and the way he corrects them could reveal character. Who is he respectful to? Who is he rude to? Who does he let get away with it? I think they’ve missed out on that simple little device.

DA: See, I hadn’t even realized that the pronunciation was so regionally specific. Now all I can think of is the film Young Frankenstein (“Frahnkenschteen”). I like that you brought up the fact that John is a con man and a liar. Can he exist on network television? Does the popularity of shows like Breaking Bad or Mad Men mean that the networks are willing to look at flawed empathetic leads? If NBC allows a bit of that, I suspect we might be in for a treat. They do have a show on right now named after a cannibal, so…

What’s a good example of a Hellblazer story that depicts John as a liar?

JS: The definitive story at this point is probably collected in Hellblazer: Dangerous Habits, which was the basis for the Keanu Reeves film, and shows John manipulating the lords of Hell to save his own skin. That story also gives us the most iconic image of the whole Hellblazer run, but I’ll leave that for fans to discover.