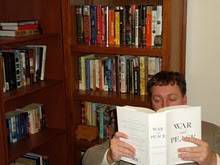 When I was a bit younger, I used to amuse my friends (and, more so, myself) by keeping day-long running diaries of those magical days — football or basketball games, weddings, or other special events — when we’d start drinking early in the morning before most people have had their first cups of coffee. Entries included things like: “2:35 pm. Jim can’t stand up by himself. He has just dropped his own beer and bumped into John, spilling John’s beer also. Jim drops his cigarette into a puddle of beer and filth, but undeterred, picks it up and tries to smoke it again.” Real mature, right?

And but so, last fall, I read War and Peace (bear with me; that non sequitur will make sense in a second). In some ways, reading that 1,420-page novel resembled a day-long drunken binge: It was fun, but ultimately, it was also a lot of hard work. So, similar to those glorious days of yester-drunken-year, I thought I’d keep a running diary of my battle with War and Peace. If you’ve ever considered conquering the War and Peace beast, this might offer some insight, or at least demystify the so-called “greatest novel of all time” a little. Or not. At any rate, here you go:

Sept. 5 — It’s Labor Day. I’m a little hungover after a rare Sunday night out, but I’d promised myself all summer I’d start today, Labor Day being the unofficial end of summer, and War and Peace being the polar opposite of a summer read. Makes sense, right? Let’s do this! Bring it, Leo! Confidence: 100 percent!

Sept. 6 — Kit, a Book Riot contributor, and War and Peace conqueror, leaves a comment on my Goodreads page congratulating me on starting the novel, but castigating me for the translation I’ve chosen. Some British wanker named Anthony Briggs translated the version I’m reading. Apparently, that’s a bad thing. I decide to keep going. Confidence: 75 percent.

Sept. 12 — One of the main characters, Pierre, and his buddies play a drinking game whereby a fellow has to balance himself on a window, pound a bottle of booze, and not fall out. Later, they’re all faced, and they tie a policeman to a bear and throw him in the river. This book is speaking to me. Confidence: 100 percent.

Sept. 28 — I’m on page 441. There’s a lot lately about a Russian officer named Denisov, who talks like Elmer Fudd. All his r’s are w’s. So if he were exhorting his buddy Rostov, he’d say “Wostov wules!” as opposed to “Rostov rules!” I spend more time thinking about the linguistic technicalities of how, precisely, this quirk would’ve manifested itself in Russian than I reasonably (or sanely) should. For three seconds, I consider learning Russian to understand better. But I don’t. Confidence: 70 percent. 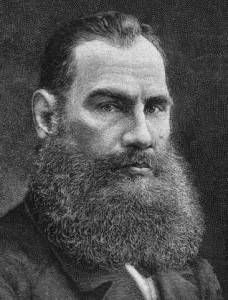 Oct. 13 — I’ve slowed to an absolute crawl. I’ve only read 90 pages in the last two weeks. But I did traverse the first major “war” scene, which wasn’t bad. Need to refocus. This novel needs more sex. It should be War and Peace and Sex. That would rule. Confidence: 50 percent.

Nov. 1 — And here we go…Sex-kitten Natasha is questioning her engagement to the dashing Prince Andrey, and thinking of running off with another dude. I kind of have a crush on her. Confidence: 75 percent

Dec. 5 — Holy shit, I’m finished! Well, to be precise, I’m finished with the main story.There’s still about a hundred pages of epilogue. That should be no big deal, though. It’ll just wrap up the loose ends and I’ll be done. Done! Confidence: 100 percent!

Dec. 7 — Holy shit, that was brutal! The last hundred pages (two epilogues) were an absolute test of wills — Tolstoy wraps up the characters’ stories eight years in the future, and then spends another 40 pages philosophizing on history and war and whatnot. It was rough going. Of course, the last bit has to be the most difficult. But now I’m done. DONE!

Jan. 3 — I’ve spent a month thinking about this novel, and with the exception of this pithy blog post, I’ve been unable to come up with anything even remotely intelligent to say about the book. I need to read it again, I guess. Anyone else in?