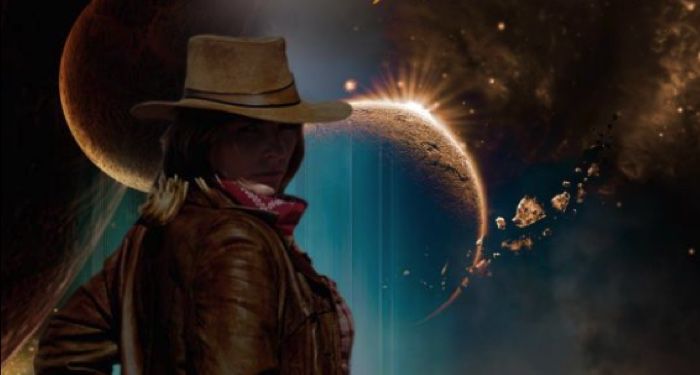 In the literary world of genre specifications, there’s science fiction, and then there’s the weird little sibling who still isn’t sure what in Pluto is going on but has buckled in for the ride. We’re talking about space western books, and I’m totally here for that weird little sibling. It’s a mish-mash of magnificence to the power of seven while shooting for stars way outside this galaxy (and the next). If you love The Mandalorian, then you have found your clan. If you think Firefly was snuffed too soon, then grab your shiny and jump aboard.

And please note, this article is best read with background music: Tank!, the Theme Song from Cowboy Bebop, the ultimate anime series and pin-up for all things space western. I love this cover performed by DA Jazz Alumni:

What are Space Western Books?

Space western is a sub-genre of science fiction, relying on sci-fi settings while using the tropes of Westerns for the storytelling and characters. There are three common elements included in space western novels: exploring new and often lawless frontiers, “ragamuffin” motley characters, and a sense of community as those same characters are thrown together whether they like it or not.

Cowboy Bebop is one of the best examples of the space western genre, with its forced family dynamics, traveling through space, and chasing bounties for criminals. Bebop’s characters achieve so much together and regularly declare they can do it alone if they really want to. (Spoiler: no, they can’t.) Gene Rodenberry once described Star Trek: The Original Series as a “Wagon Train to the stars,” drawing on the space western ideal of exploring frontiers and righting wrongs across the quadrant. The Mandalorian also started strongly within space western territory, but like many things Star Wars and across the sub-genre, there is a blurring of the lines with space opera. In contrast, “space opera” tends to lean more heavily on the dramatic with grandiose storytelling of some greater universal influence. My personal litmus test comes down to the main antagonist. If they ask the ultimate question, “How is this my problem?” then you have yourself a space western. Any more care than that, and you’re flying into a drama-filled space opera. 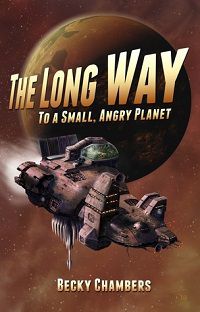 This is an excellent book to introduce you to space western novels or even science fiction in general. It follows Rosemary, an introspective young woman who haphazardly joins the weird little crew aboard the Wayfarer. She’s not used to relying on others, and to be honest, the same applies to the rest of the gang. Then they are offered “the job of a lifetime,” and you just know things are going pear-shaped. Chambers has a warm writing style that draws you in and fills the space around you. This is her debut book, self-published thanks to Kickstarter in 2014 and so popular that she has added three more to the award-winning series (Hugo Award 2019). It is strong on world-building with multiple unique alien races and individual story arcs for each book in the series. 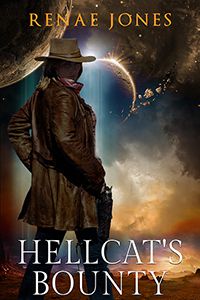 You have to be impressed when your leading lady has “flamethrower” listed as one of her key skills. Mighty helpful when fighting off carnivorous amoeba as they slowly take over the half-abandoned mining port. It’s the ideal bounty for a lone space cowgirl. If only that darn romance stuff wouldn’t interfere with her sunset brooding. It’s exactly what it says in the blurb: Lesbian romance space western. This book is heavy on the western tropes and a fun romp through the pages. 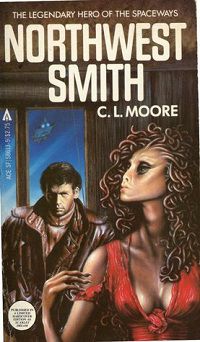 One of the first women to write space western books was C.L. Moore. She was also one of the best: her earliest work was published in Weird Tales in 1933, which made her stand out as a young woman featured in a magazine dominated by male authors. Moore created the rogue adventurer, Northwest Smith, who wandered through the Solar system in his space leathers with strong Mando-vibes. This is a collection of 10 novelettes, originally published between 1933 and 1940. Despite its origins in pulp fiction, Moore never intended to please everybody with her writing. If anything, it is the perfect space western writing, with Smith often completing his task relying on questionable tactics and the obligatory walk into the Martian sunset. 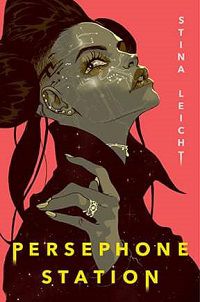 Here is a perfect example of the overlap between space western and space opera. Persephone Station is the name of a backwater planet, mostly ignored by the United Republics of the world because it is convenient for it to do so (read: big, grandiose influence). Rosie runs the local bar, a favourite amongst exclusive criminals and those who seek to employ them. It just so happens that Rosie has a job and wants Angel (an ex-marine and head of a motley crew) to do it. As much as Angel wants to keep to her simple life, there is no avoiding the grand conflict that awaits. 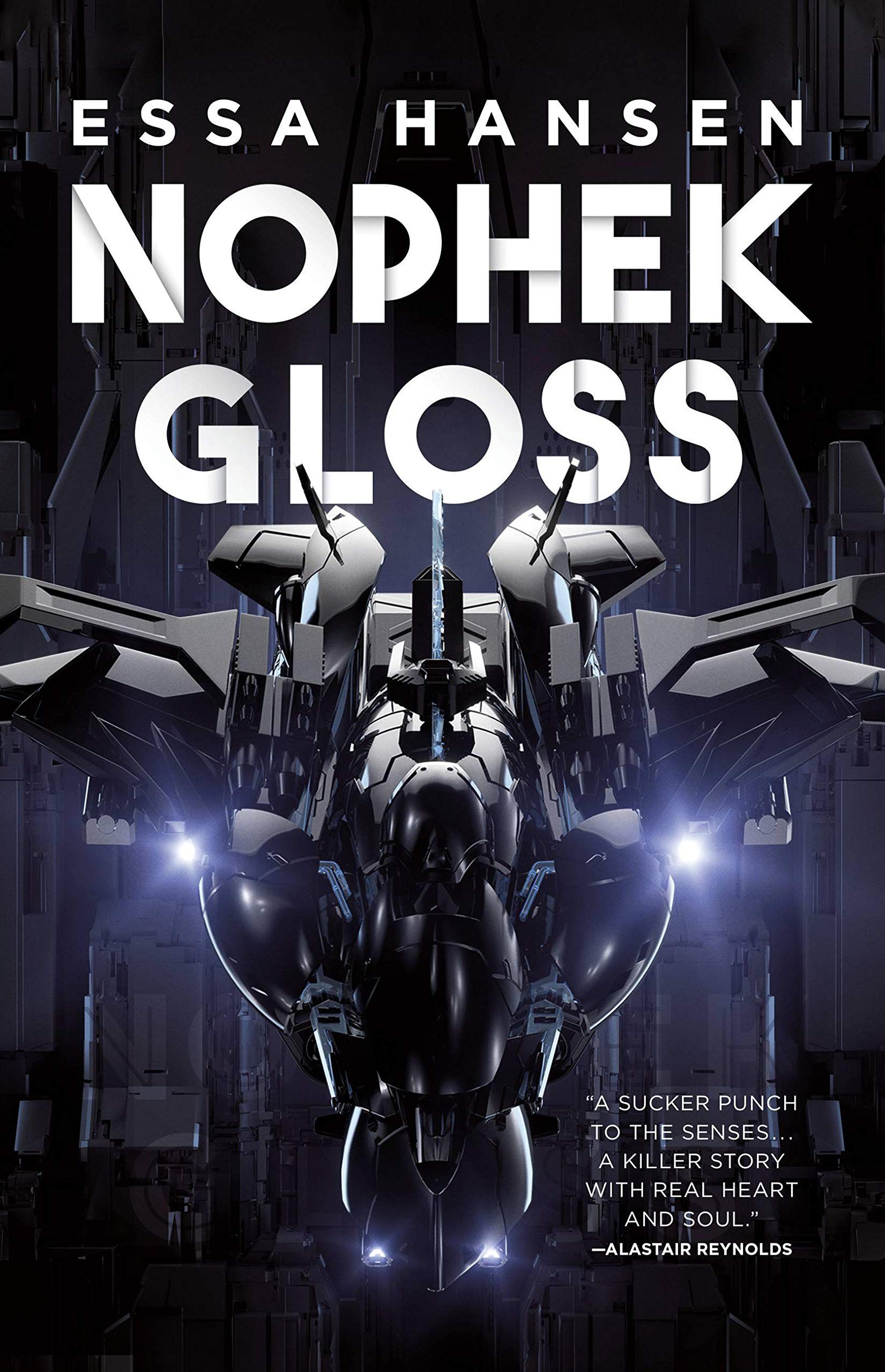 Nothing says “space western” like having a main character who has nothing left to live for. Slavers murdered his people and destroyed his planet, yet Caiden lives on — thanks to a crew of misfit aliens and a spaceship with more soul than all of them combined. Even with all its sci-fi scenery, this is a story of balance between a crew trying to show Caiden how to live and his personal demons wanting vengeful deaths. This is not a light-hearted western; it is dark and grim and pushes the limits of what we may consider justifiable. But that’s the appeal of good space western novels. What we may think is morally reprehensible can often be accepted in the hands of a man like Caiden. This is the first of a trilogy, with the final book scheduled for release in 2023. 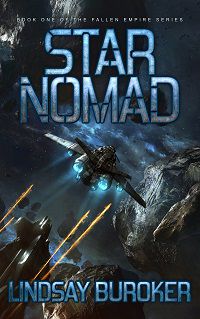 It starts off with space opera vibes, but once we meet the haphazard crew, it turns out we’re reading a space western book with an extra dose of snark. Our main antagonist is Captain Alisa Marchenko, a fighter pilot who crashed on a desolate planet in the final battle against a tyrannical empire. Her side won, but before she can join the celebrations, she wants to head home to her daughter — who happens to be billions of miles away. Her plan: to steal a rundown freighter, preferably without getting killed and without the stowaways. This is a fun debut novel in the new Fallen Empire series. 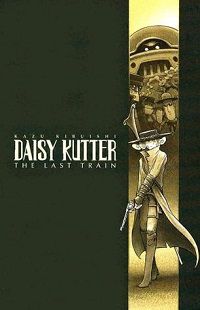 Better known for the Amulet series, Kibuishi’s combination of art and writing always elicits an “out-loud” response from me, and the graphic novel Daisy Kutter is no different. Let’s face it: only adults can really appreciate how dead-boring adult life can be, right? At least, that’s how Daisy feels. She has officially retired from her bandit days and is now a respectable small-town citizen as the local general store owner. It doesn’t last long, but that is what makes for good storytelling. 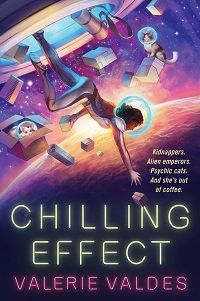 In traditional westerns, it was a lone gunslinger. In space westerns, it’s the captain of a spaceship with nothing left to lose and the recalcitrant crew who are merely following orders. In Chilling Effect, when the captain’s sister is kidnapped, things slowly start to unravel with more and more weirdness thrown around. What makes this for me is the family-like dynamics (yes, a reliable space western trope) added with enough sci-fi quirks to make me giggle. It’s an absurd ride, but I’m here for it and the sequel. 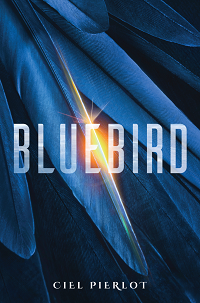 A brand new debut novel from Pierlot, published in 2022. To be fair, this book is both space western and space opera, with two stories being told in parallel. There is a big political mess created by three factions at war, but the juicier story is focused on Rig and her mad efforts to avoid all of that chaos because she does NOT want it to be her problem. But then “they” kidnap her twin sister and make it her problem. Read for a lesbian gunslinger fighting spies in space who attracts the best ragamuffins to join her. 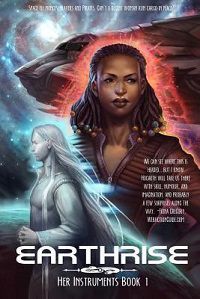 Earthrise (Her Instruments #1) by M.C.A. Hogarth

It is a fundamental truth for space western books (and really any western genre) that you are not guaranteed to like the main character. Sorry, but it just sometimes doesn’t happen. In most cases, you are going to be frustrated with their morally ambiguous choices. Earthrise is a great example of this. I still don’t know how I feel about the main character, Reese Eddings. Her main focus is to earn enough money to take care of her and her crew (in that order). She doesn’t like complications, but unfortunately, her latest job comes with complications. Funnily enough, it is Reese who does most of the “complicating,” and the supporting cast is the driving force in making her realize this. I love the diversity of characters and how they weave a detailed story around the core concept.

Space western novels are built on single characters with a single focus and often a single story arc. Sure, we love the “pew-pew” side of them, but we are really here for the disaster drama and the adopted family dragging them into the triple-star sunset. If you’re into the space western novels that dance around the equally enjoyable space opera genre, check out fellow Book Riot writer Rachael Brittain’s latest article on the best space opera novels.