If you need to write or recite something about love, look no further for inspiration than the Bard—there are an endless number of Shakespeare love quotes. Writing your wedding vows? Toasting a happy couple? Writing a romance novel or a letter to your beloved? Shakespeare probably said it first, and better. And since he was known to steal (and improve, of course) plots from other plays, I don’t think he’d mind if you borrowed some of his best words about love for your own purposes. Here are 25 short Shakespeare quotes for weddings or any other occasions involving love in all its glory.

Engraving of William Shakespeare created by Martin Droeshout in 1623.

I’m not a huge fan of Romeo and Juliet, but you can’t deny that it’s a romantic play—that’s basically the whole point. There are some beautiful lines in this play to use in weddings or love letters. Just try to forget that they die at the end.

“If I profane with my unworthiest hand


This holy shrine, the gentle fine is this:
My lips, two blushing pilgrims, ready stand
To smooth that rough touch with a tender kiss.” (Act I, scene v)

“Love is a smoke rais’d with the fume of sighs;
Being purg’d, a fire sparkling in a lover’s eyes;
Being vex’d, a sea nourish’d with lovers’ tears:
What is it else? a madness most discreet,
A choking gall and a preserving sweet.” (Act I, scene i)

“My bounty is as boundless as the sea,

Book Deals Newsletter
Sign up for our Book Deals newsletter and get up to 80% off books you actually want to read.
Thank you for signing up! Keep an eye on your inbox.
By signing up you agree to our terms of use
My love as deep; the more I give to thee,
The more I have, for both are infinite.” (Act II, scene ii)

“Love goes toward love, as school-boys from their books,
But love from love, toward school with heavy looks.” (Act II, scene ii)


Give me my Romeo; and, when I shall die,
Take him and cut him out in little stars,
And he will make the face of heaven so fine
That all the world will be in love with night,
And pay no worship to the garish sun.” (Act III, scene ii) 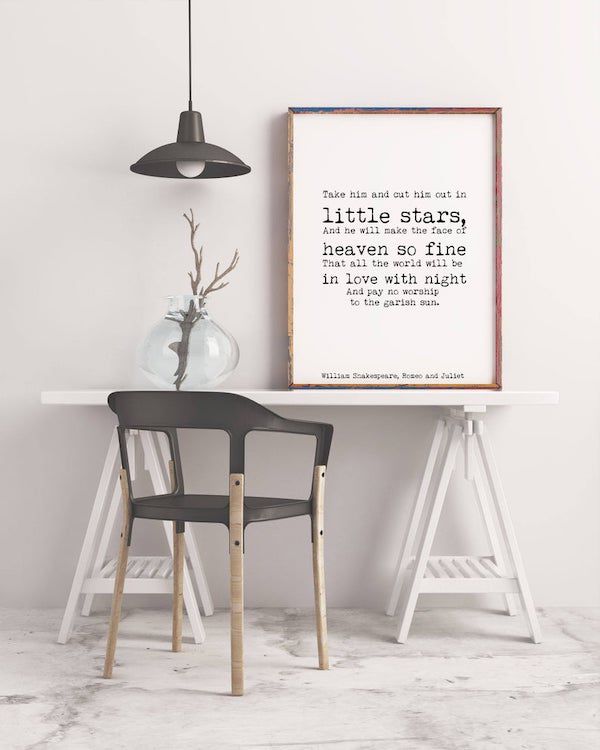 This is a great play to see on a date to Shakespeare in the Park. Just saying.

“But are you so much in love as your rhymes speak?
Neither rhyme nor reason can express how much.” (Act II, scene iii)

“If thou rememb’rest not the slightest folly
That ever love did make thee run into,
Thou has not loved.” (Act II, scene iv)

“Who ever loved, that loved not at first sight?” (Act III, scene v)

A play that features endless combinations of lovers falling in and out of love must have something wise to say about it, right? Yes! Two of Shakespeare’s all-time hits are from this play, in fact.

“Love looks not with the eyes, but with the mind,
And therefore is winged Cupid painted blind.” (Act I, scene i)

“The course of true love never did run smooth.” (Act I, scene ii) 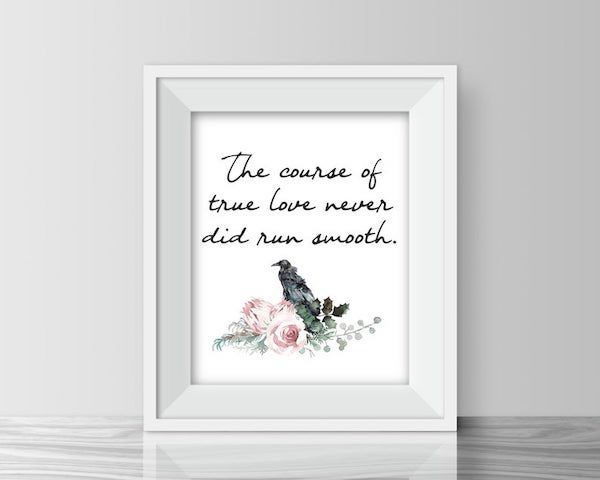 Shakespeare Love Quotes from Much Ado About Nothing

If you have not seen the Kenneth Branagh and Emma Thompson film version of this play please, please do yourself a favor and watch it. Savor the delicious banter and lush Italian setting! Also savor Keanu Reeves and Denzel Washington in their supporting roles. 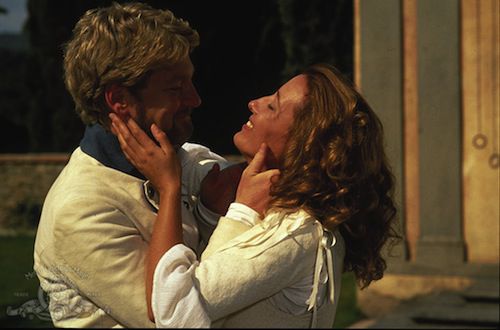 Kenneth Branagh and Emma Thompson are a happy couple in the 1993 movie Much Ado About Nothing. Image from IMDb.

“When you depart from me sorrow abides, and happiness takes his leave.” (Act I, scene i)

“Silence is the perfectest herald of joy. I were but little happy
if I could say how much.—Lady, as you are mine, I am
yours. I give away myself for you and dote upon the exchange.” (Act II, scene i)

“I do love nothing in the world so well as you—is not that strange?” (Act IV, scene i)

“I love you with so much of my heart that none is left to protest.” (Act IV, scene i)

“I will live in thy heart, die in thy lap, and be buried in thy eyes—and moreover, I will go with thee to thy uncle’s.” (Act V, scene ii)

Shakespeare Love Quotes from Other Plays

There is always a pair of lovers in a Shakespeare play, whether it’s a comedy, history, or tragedy. No, King Lear is not particularly romantic, nor is Hamlet (fight me), but the quotes below are quite nice.

“I do love you more than words can wield the matter.” (King Lear, Act I, scene i)

“One half of me is yours, the other half yours—
Mine own, I would say; but if mine, then yours,
And so all yours.” (The Merchant of Venice, Act III, scene ii)

“Hear my soul speak:
The very instant that I saw you did
My heart fly to your service…” (The Tempest, Act III, scene i)

“Sweet, above thought I love thee.” (Troilus and Cressida, Act III, scene i)

“Doubt thou the stars are fire;
Doubt that the sun doth move;
Doubt truth to be a liar;
But never doubt I love.” (Hamlet, Act II, scene ii) 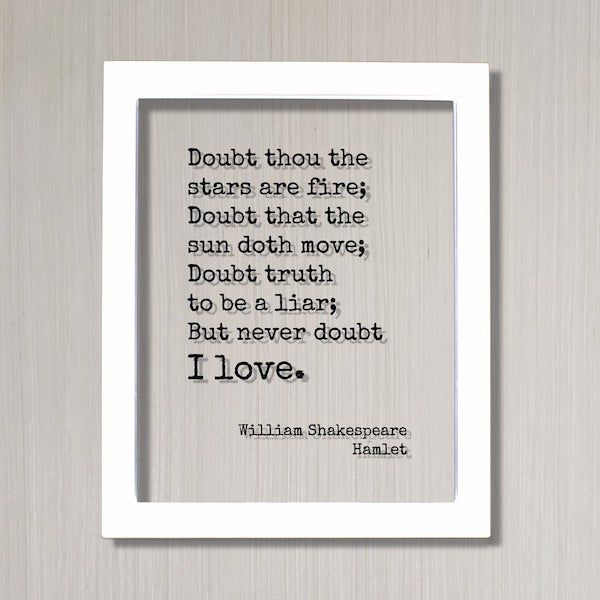 A sonnet is a type of poem written in a specific rhyming pattern, usually meant to be a love poem addressed to a specific person. Sonnets were already popular poems by the time Shakespeare came on the Elizabethan literary scene, but he truly made the form his own, writing 154 (that we know about) and causing one particular form of the sonnet to be nicknamed the “Shakespearean sonnet.” Sonnets are short poems at 16 lines and usually the poem takes a “turn” toward the end where the poet expresses some sort of resolution or final romantic statement. I’ve linked to the full versions of the sonnets I’ve quoted from below, so go check them out in their entirety—but first enjoy these short Shakespeare love quotes from the sonnets.

“Thy sweet love remembered such wealth brings
That then I scorn to change my state with kings.” (Sonnet 29)

“In me thou see’st the glowing of such fire
That on the ashes of his youth doth lie,
As the death-bed whereon it must expire,
Consum’d with that which it was nourish’d by.
This thou perceiv’st, which makes thy love more strong,
To love that well which thou must leave ere long.” (Sonnet 73)

“Love is not love
Which alters when it alteration finds,
Or bends with the remover to remove:
O no! it is an ever-fixed mark
That looks on tempests and is never shaken.” (Sonnet 116)

“My love is as a fever, longing still
For that which longer nurseth the disease,
Feeding on that which doth preserve the ill,
Th’ uncertain sickly appetite to please.” (Sonnet 147)

And as music be the food of love, we’ll play on. Here’s Juliet Stevenson reading all of Sonnet 116, one of the most romantic poems of all time (in this writer’s humble opinion):

Happy speeching and writing love letters, everyone! If you are looking for other bookish wedding quotes, check out our suggestions here, as well as this list of bookish wedding readings. Want more Shakespeare? Get a tattoo featuring the Bard!