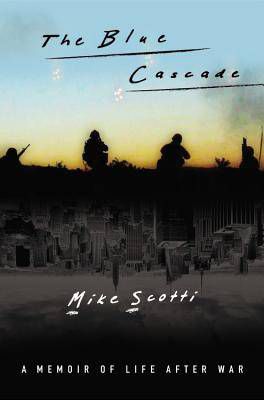 Mike Scotti, author of the recently released memoir The Blue Cascade: A Memoir of Life After War (Grand Central Press, May 2012), joined the United States Marine Corps Reserves as a private and was promoted to corporal before attending Marine Officer Candidate School, after graduating from the University of Miami. Commissioned as a second lieutenant, he served four years on active duty as an artillery officer and platoon commander in the First Marine Division. He was among the first American troops into both Pakistan and Afghanistan in the fall of 2001, and deployed to Iraq in early 2003. Scotti was awarded the Navy Achievement Medal with Combat “V” for actions under fire.

After being honorably discharged from active duty, Scotti attended the New York University Stern School of Business, where he received a Master of Business Administration with a specialization in Finance. He founded the Military Veterans Club and was a founding Board of Director member of the the military charity Reserve Aid. He remained a Captain in the Marine Corps Reserves until his Honorable Discharge in early 2008.

Mike Scotti is the subject of the critically-acclaimed, award-winning documentary film Severe Clear, directed by Kristian Fraga from the extensive video journals Scotti kept while serving in Iraq.

Mike Scotti: Maphead by Ken Jennings. I stole it from my dad. I do that all the time–I think my parents, and my dad especially, are singlehandedly supporting Barnes & Noble’s top-line sales revenue by buying new books constantly. They never buy online. Every single weekend they go to their local store and buy as many hardcovers as they can carry.

BR: Do you mean to say that you come from a reading people?

MS: My parents have always been book buyers, and even though I tell them that there are other methods of purchasing books, they say they don’t care. They want to support authors! Both of my parents grew up in blue-collar households; my father’s father was a butcher. So, basically reading and education got them where they are today, into the realm of the American dream. For example, my father got a full scholarship to Harvard and then to the University of Pennsylvania Medical School.

BS: How did your reading affect your writing, specifically of your new memoir?

MS: When I was about 11 or 12 I started reading war memoirs. I never cared about the history of the battles, the tactical blow-by-blow kind of stuff; I only ever cared about the down-in-the-trenches kind of stuff. My dad’s sister’s husband was a Vietnam vet, and this uncle and I would go on awesome outdoor adventures. When we became close, I started reading Vietnam memoirs and novels. I’m standing here in my parents’ house looking at my old bookshelves and I probably have about 45 softcover books of that type.

I started reading those because of a personal link, but then I started learning more about war in general, and got really interested in World War One. It was so brutal, probably the worst combination of outdated tactics combined with new technology. Entire battalions–which often meant towns and communities–were wiped off of the face of the earth.

BR: What book do you wish you had written?

MS: (Without a moment’s hesitation) The Old Man and the Sea. People can poke holes in it all they want, but to me it’s the greatest thing ever written. I don’t think you can get any better than that from a storytelling, dramatic action or prose perspective. It’s pretty close to perfect.

When I really think back to what inspired me to write, there’s a Hemingway short story A Soldier’s Home reading since I was a kid line that gives me goosebumps he’s got the picture “The girls were not beautiful and the [TK] does not show in the picture.” THe tone of that short story so captured the vagueness of being a veteran. That’s what I was going for.

BR: Are you working on anything new? How is your reading affecting that project?

MS: My next book will be a novel, and I’m in the structuring, spending-money-on-research phase. Nexdt week I’ll be flying in a B-17 bomber out of Bridgeport, Connecticut, and after that, meeting with the head research officer at the Imperial War Museum in Duxford, England.

It’s about World War II, and it’s really different. I was inspired to write it by a letter I saw for sale on eBay. It was an unopened letter dated March 1945, from a mother to her son. He was a B-17 pilot who was killed, and the mother had a whole stack of letters returned to her. When I saw that item, I thought: Right there. That’s a novel. I don’t know how, but I know why. I wanted to write something life affirming, something about love and happiness and joy and the good things in life. In my memoir, I plumb the depths–but in my novel, I’m changing the key from minor to major.

BR: Which book changed the way you though about writing a memoir?

MS: I read Jarhead by Anthony Swofford a month after I got back from the war; I still have my original copy. Even though there are some problems with Swofford’s recollections, it actually took the genre of the war memoir to the next level, in my opinion.  Swofford captured an emotional rawness that I recognized, instead of just capturing the objective reality of, say, fighting in a jungle.

When I started to write The Blue Cascade, and it started to turn into Severe Clear–well, I thought I needed to stop reading and just let it bleed out. It wasn’t until six years after I got home that I was ready to do that. When I was over there, I was in the moment, but when I came back, I realized that this war really was for nothing. That’s what sent me over the edge.

BR: You made a movie, first, based on your wartime video diaries. Does that constitute part of the “reading” experience, since your book is a sort of sequel to the movie?

MS: I think that what it really comes down to is storytelling. When you look at the stories that end up becoming timeless, it’s often books that have become movies–sometimes more than once. Of course, books don’t have to become movies, but the world is what the world is. The media pays more attention to movies than it does to books.

BR: So why did you write a book?

MS: I think it was because I am a reader. I saw this story in my head, and I knew it was going to be a memoir, and it kind of wrote itself. But I personally believe that if a story is good it can be moved around to any medium available. ,Great prose can read like poetry. If it speaks to people it doesn’t matter what medium it is. You have to work with reading more than you do when you’re watching something on a screen, but I still think that work is good work.