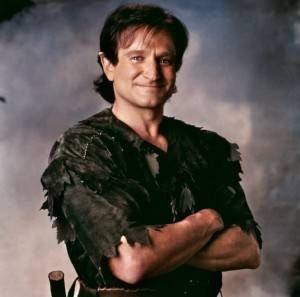 I was in the locker room of my gym last night, putting away my water bottle, when I looked up at the wall-mounted TV and saw something ridiculous.

It didn’t make sense that Robin Williams could be dead. How could a person whose voice and face were such a part of my childhood be finite?

He had to be hiding somewhere, impersonating a fictitious housekeeper or paying a visit to Never Never Land for an imaginary food fight with the lost boys. Or maybe he was just taking a nap in his magic lamp (iiiiitty bitty living space).

I can’t think of another actor who has embodied so many vivid characters, many of which came from books — or loved books.

Williams appeared as himself in this documentary on writer and essayist Harlan Ellison.

Based on a short story by the esteemed Isaac Asimov.

Based on the novel by Richard Matheson: an author who I’ve never read, but who comes highly recommended by a fellow Rioter.

Williams played the titular character in this movie based on the book Gesundheit: Good Health is a Laughing Matter by Patch Adams and Maureen Mylander.

Goofy Flubber was based on a short story by Samuel W. Taylor called “A Situation of Gravity.”

Based on a play by a guy named Shakespeare.

I was hoping I could justify including The Birdcage! It turns out the movie is based on a play by Jean Poiret. How terrifying and awesome was this movie? I haven’t seen it since I was 10, but thinking about it still gives me a visceral reaction of simultaneous horror and delight. The movie was based on a book by Chris Van Allsburg, also called Jumanji. Apparently there’s talk of a Jumanji remake, which makes me roll my eyes. Why redo something that was perfect the first time?

I only just discovered that this movie exists. But given its subject matter and that it also features Patrick Stewart, Billy Crystal, Christopher Llyod and archival footage of Winston Churchill, Joseph Stalin and Adolf Hitler, I am now officially curious.

Did you know Mrs. Doubtfire was based on a book? It was: Madame Doubtfire by Anne Fine.

There aren’t many movies I have a deeper, wilder love for than Hook.

Williams plays Peter Banning, a grown-up Peter Pan who has forgotten his past. When Captain Hook finds a way to reach into Peter’s new life and steal something precious to him the stuffy, grown-up Pan must re-learn how to fly, both literally and metaphorically.

If you haven’t seen this movie, you absolutely must watch it immediately. Unless you hate joy.

In The Fisher King, Williams’ plays a man enraptured by story of the Holy Grail of Arthurian legend, a story in so many books that it’s not even worth deciding which to cite.

This movie is a lot of things, and one of those things is the love story between the written word and the readers whose lives it transforms. It’s no wonder that this one in particular touches our bookish hearts.

When I was little, I had a VHS copy of this recorded from the TV. I didn’t realize Robin Williams played the Frog Prince in my memory until I started writing this post.

This Oscar-nominated movie is based on an Oliver Sacks book of the same name. I haven’t read Awakenings, but I have read Sacks’ The Man Who Mistook his Wife for a Hat, and it’s fascinating.

This sailor man is best known from the animated cartoon, but he started out as a comic strip.

A mere sampling of an incredible filmography from a remarkable man.