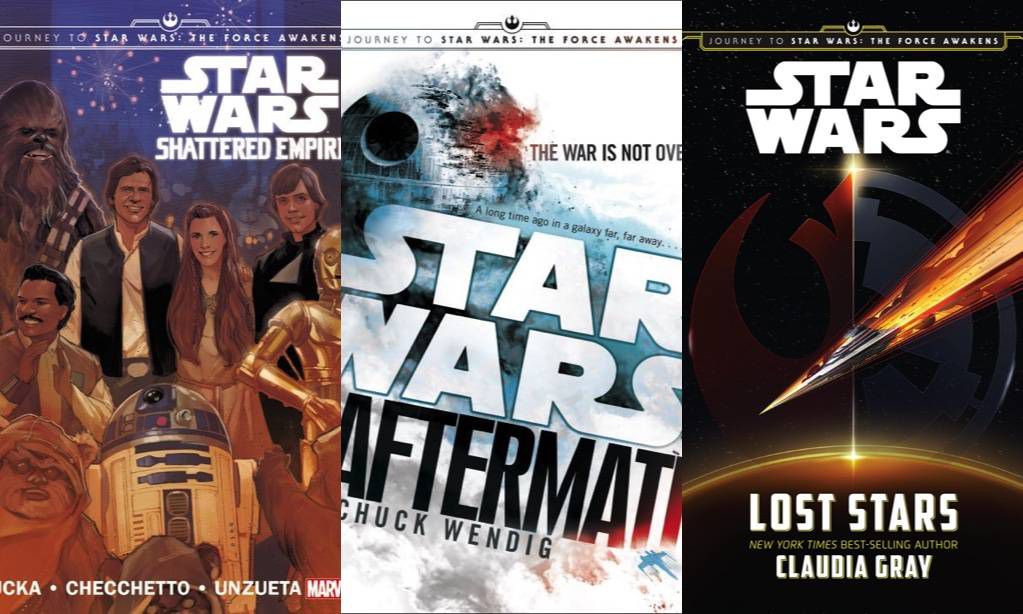 We’ve discussed how I’m a bit of a nut for Star Wars. I have been going a bit crazy on merchandise. If you read Off-Panel, my daily round-up of news, you might have noticed it’s Star Wars heavy. I have a Star Wars problem, as I basically say daily on Twitter, but it’s the best kind of problem to have. I’ve also discussed how I’m not interested in Star Wars spoilers, interviews, footage, or other bits of information that have been coming out about the series.

But what I AM interested in is the official books. I’ve read as many Star Wars: Journey to the Force Awakens books and comics as I’ve been able to get my hands on [Edit: I’m specifically focusing on post-ROTJ books and comics]. I love theorizing and trying to figure out where the movie is going to take us and what the premise is going to be. What’s the galaxy going to look like? The people at Disney have done an excellent job providing tantalizing clues and hints to what’s going to happen without giving too much away: a fine line, but one they’ve walked well in terms of comics/books. (I’m not going to talk about the endless promo interviews and TV spots I’ve been avoiding).

So, if you’re eager to brush up on the galaxy’s history before Star Wars: The Force Awakens, but, like me, don’t want spoilers or TOO MUCH information (just enough to flex those theorizing muscles), these are the books you need to read.

This series takes place immediately after the events of Return of the Jedi, and already readers can see that the smooth transition from Empire back to Republic isn’t going to happen. Hearts are in the right place, but there is too much of the Empire left for that to happen. There’s a lot of fighting, a lot of war (the bulk of the comic is action scenes), but there are certainly indications of what’s to come. It’s the most worth it for the fourth and final issue, which is our only glimpse so far of Luke Skywalker besides that intriguing shot in the trailer. Just what has he been up to?

Okay. This book leaves something to be desired. I’m not going to even try to pretend like it’s the best. But what it’s great for is picking apart clues for The Force Awakens. The interludes give us serious hints at what we’ll see in the new movie—”Vader Lives” graffiti, an interesting set of armor up for sale, the backwater planet of Jakku (the book is set about 7 months after Return of the Jedi, and the Battle of Jakku takes place about a year after the movie). The seeds are sown in this book for what’s to come. What’s more, it introduces the first new-canon queer character. It also sets the stage for the sequel novel, Life Debt, featuring Han and Chewie, out in May of 2016 (which I will also be reading because Star Wars.)

Honestly, this is the best Star Wars book I’ve ever read. It’s a great book in and of itself, without the Star Wars connection, which is honestly not an easy thing to do. It features two kids, Thane and Ciena, who grow up on the same planet. Thane is a rich city kid, while Ciena is a poor country girl, but they both have ambitions to go to the Imperial Academy. As they grow and change (and fall in love!), they see what the Empire is capable of. The book span the time between the prequels and original trilogy, but it takes us all the way through the aftermath of the Battle of Jakku. (I’m not telling you what that is, in case you don’t know and don’t want to know.) This book is so incredibly good and emotional, and I just want everyone to read it because it’s awesome. That, and it has some great hints for what’s to come and how things got to be the way they are.

I’ll also mention that the bulk of the Star Wars comics Marvel has been putting out recently are great (that Princess Leia series, man! And Vader Down!), though they take place between Star Wars and Empire Strikes Back, so they aren’t as relevant to events in The Force Awakens. But they are still great, and you should read them. I’ve also read some of the Landry Q. Walker and Delilah Dawson stuff and, while fun, I haven’t found anything to pick apart for The Force Awakens clues.