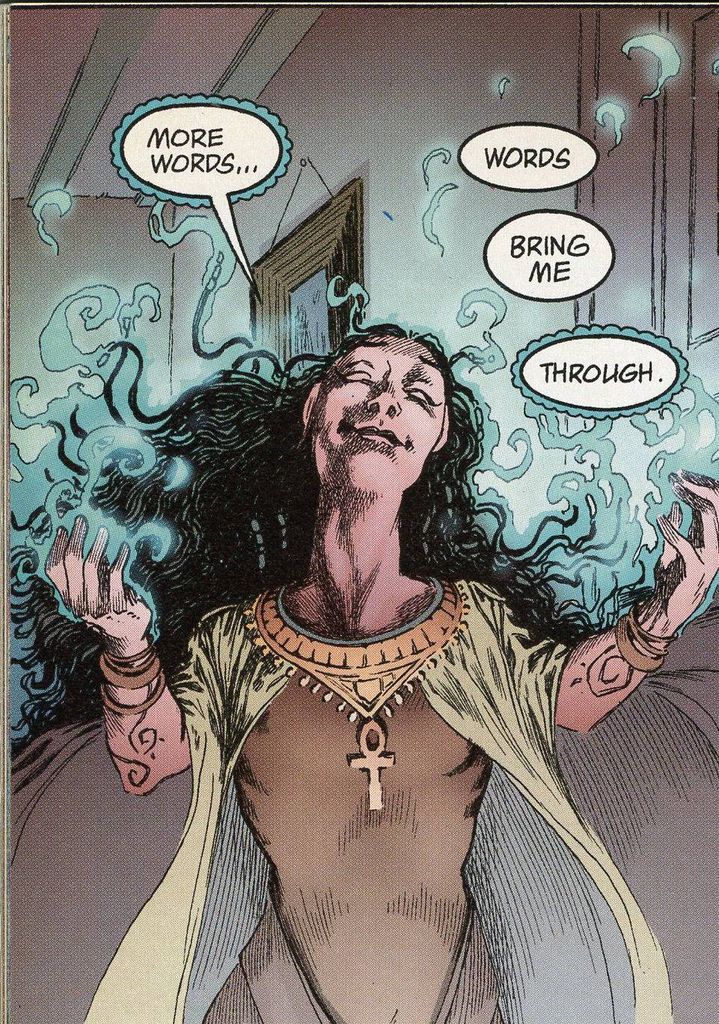 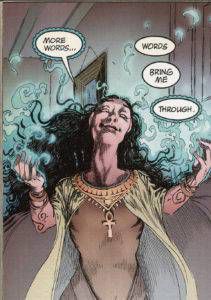 “Who’s your favorite superhero?” he asked.

And although I was wearing a Martian Manhunter button on my convention lanyard and lusting over Jessica Jones cosplays, I said, “Do you know Alan Moore’s Promethea?”

From the outside—the covers and the promotional material and your average reader’s general knowledge about Moore—she might look like just another comic book superhero, fitting snugly into our basic understanding of the genre, perhaps coupled with what we might know about Alan Moore’s vision of “science heroes” like Tom Strong, with a healthy dose of Dr. Strange-style magic, replete with mandalas everywhere. You can certainly read the book that way, or try. On the surface, it’s an exciting origin story with an exciting backstory followed by some exciting conflicts, featuring journeys, growth, and, at long last, surprising resolution. 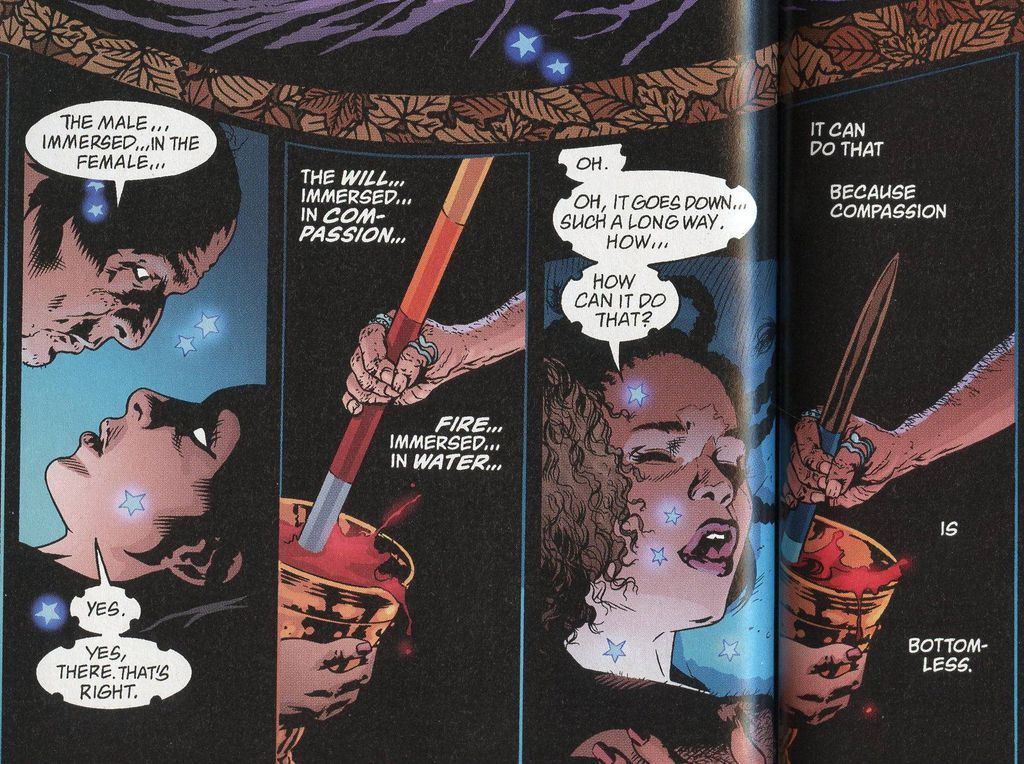 The Stack Newsletter
Sign up to The Stack to receive Book Riot Comic's best posts, picked for you.
Thank you for signing up! Keep an eye on your inbox.
By signing up you agree to our terms of use
But, just like the multifaceted artwork, with illustration styles that change from issue to issue, sometimes from scene to scene, Promethea is working on a lot of levels. Moore has a message, or an endgame, or a hidden prize. He’s your favorite high school teacher, the one who disguised his lesson plans with such grace that you didn’t even realize you were learning the history of the Civil War or the mechanics of the covalent bond, because education isn’t usually so entertaining or distracting.

Follow the glowing stars, mystic moths, myriad mandalas, little suns, and snakes of wisdom deeper through the pages and you find that, at the root of this project, Moore has published a primer in elementary magic (or “magick” if you will) disguised as a beautifully illustrated, sexy, funny, provocative, action-packed comic book. The power of imagination made manifest hits the page in issue one, shining a narrow light on Moore’s concept of a tangible world of mythology and symbolism: the Immateria, or the physical realm of the human imagination. 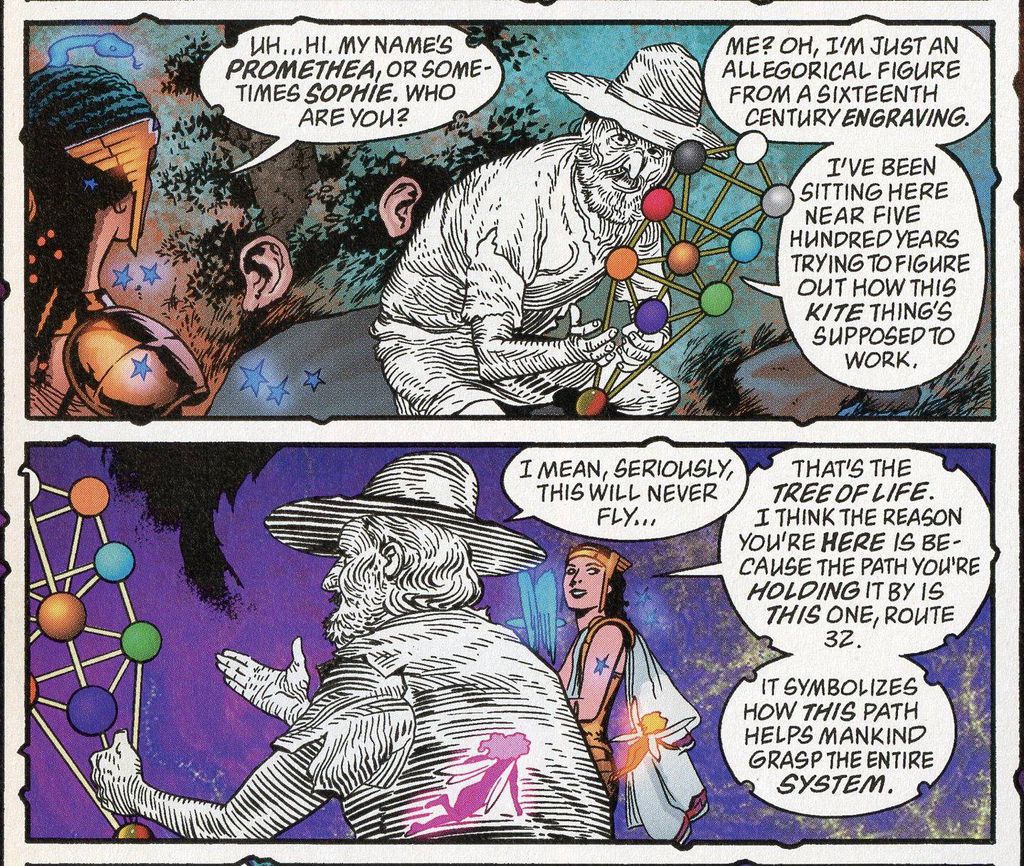 At the heart of this conception of magic lies the old wizard’s incantation, “Abracadabra,” often translated to suggest something like “speech precedes creation.” When Promethea’s newest avatar, scrawny college kid Sophie Bangs, writes about Promethea, she transforms, body and mind, into the tall, buxom, powerful demigoddess. God said, “Let there be light, and there was,” and Moore’s path, chaos magic, assumes this power for humanity as well. If spoken words are magic with the power to mold reality, how much more power do written words contain? And if a picture is worth a thousand words, how much energy can thirty-two comic books hold?

But words are only the surface, hinting at the mysteries beneath. While fighting demons, psychopaths, techno-slime, her best friend, and herself, Promethea picks up the basics of her magical education. Book One introduces the Kabbalistic Tree of Life, a map of the universe as a path of divine emanations flowing from their godly source down to our material world. Hard on that lesson, comes understanding of the four weapons of the tarot: cups (compassion), swords (reason), coins (matter), and wands (spirit). Then, sex magic, with its symbolic layers of elevation, followed by another tarot lesson in the major arcana, which, in Moore’s explanation, is a history of the world and of the evolution of human consciousness. And this takes us only through the second book. In books three and four, we travel through world religion, the astrological solar system, and heaven, or whatever word you’d like to use to refer to the cosmic source, the origin of all emanations, spiritual and material. Book five encompasses the end of the world. 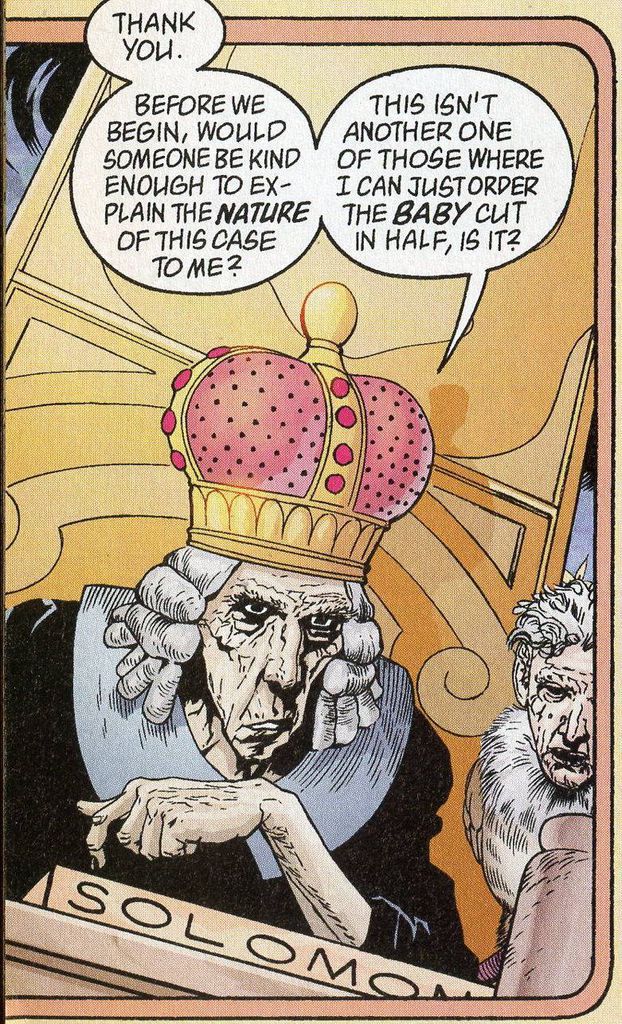 It’s not what you think. Unless you think like magician Jack Faust, who tells Sophie that, as Promethea, she’s going to end the world, adding, “Now, personally, I think ending the world’s an excellent idea! Any real magician would agree.”

“Changing the world’s as easy as changing your mind. It’s just that matter’s thicker and more viscous than imagination so it takes longer,” claims Bill, one of Promethea’s former incarnations. The world is a cultural construct, this book shows us, one in which humanity has trapped itself, one which could easily be dismantled and rebuilt according to any communally agreeable paradigm (cf Neil Gaiman’s “A Dream of a Thousand Cats”). Reality is only one, malleable dimension of the universe, science is fallible because it clings to a belief in structured laws, and we all have gods on the inside, but we’re too cut off from our own experience to see. Our perception is forced, but with only a slight shift, we can perceive the interconnectedness of all things: “the moment when everybody’s consciousness shifts from the earthly plane to the higher spheres above,” Faust explains. Or, as Sophie recalls later, after the world has ended, “It’s like we were all one person, and time had scrunched down to just one moment. And the whole world…it was like it collapsed to a single place.” 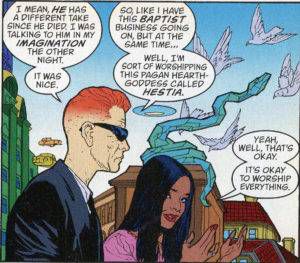 Promethea isn’t just another demigod superhero with a magical weapon and a lot of cool, inherited enemies. She’s the visual representation of the forces of enlightenment—the belief that we are all connected, and that progress is not only possible, but preferable and perhaps inevitable—triumphing over those who oppose the lifting up of the human spirit, as represented by people who burn books, restrict knowledge, and actively seek to oppress the human intellect.

Right now, maybe Promethea is the hero we need.