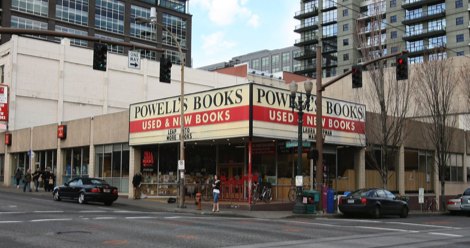 There is no denying how fabulous Powell’s Books is. It is the happiest place on earth, the West coast book lover Disneyland. It takes up an actual city block. Inside there are multiple floors of shelves of books. I could have spent a full day in just one room. Except, and here is where I start to sound like a hipster, (or a cranky old lady…who were the original hipsters, so it’s all the same) there was such a crowd. There were nooks and crannies, like all good independent bookstores have, but ultimately everywhere I was, so was someone else. Everywhere I browsed was a fellow book lover browsing. I found myself becoming a little anxious, a little annoyed, and a little surprised at how familiar these feelings were. 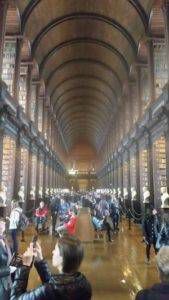 I’d recently felt the same way in Ireland when I went to see the Book of Kells. After fighting through a crowd to see the exhibit leading up to the book, I waited behind people, catching glimpses of it while the people in front described it to the people in the back. It somehow simultaneously underwhelming and overwhelming. Too many people and not enough books. I say this as a people person. I love being in a crowd at sports events and concerts almost as much as I love sitting down under a tree, in the middle of the woods, and reading a book. I am undeniably an extrovert. Since I love both people and books so much I was excited to go on many a grand adventure with bookish destinations as pit stops. I’m as surprised at my displeasure as anyone else.

I feel especially bad because all I’ve heard for many years is that independent bookstores and libraries are on the decline and need our support. How can I begrudge these places the audience and crowd they have long deserved? Cerebrally, I am delighted that these bookish destinations are getting the funding, love, and appreciation they should. Emotionally, I want all the people to please leave me and the books alone for a short while.

It comes down to expectations going in. I’ve never been around a bookstore or library that was on a list of cool places to check out. My libraries have always been silent and I’ve always been mildly surprised when I run into someone in a back nook of a bookstore. This noisy crowd of excited people, that normally would have me giddy with people watching and friend making anticipation, dashed the hopes I had of a serene moment with books. I don’t know if I’ll be able to temper my expectations. Traveling to bookish destinations has made me realize how much I use books and reading as an escape from being a people person. This isn’t to say that I’ll stop going to popular bookstores, libraries, and other bookish places; I’m just going to try to start mentally preparing for the enthusiastic and lovely, real life book riot.