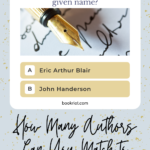 Pen names, pseudonyms, noms de plume: whatever you call it, they’re a staple of writing. Authors have been using them for thousands of years, with a range of motivations. Pseudonyms have been used to disguise the author’s identity to escape criticism or even prosecution when the works in question are critical of those in power or flaunt obscenity laws. Nowadays, many authors use pen names (or several) to write in different genres so that they can keep their romance novels separate from their mystery novels, for instance (looking at you, Nora Roberts/J.D. Robb!)

Unfortunately, pseudonyms have also used manipulatively. In 2015, a poem was included in an anthology of the best poetry of the year under the name Yi-Fen Chou — only it turned out that the poet’s real name was Michael Derrick Hudson, a white man who used a former classmate’s name in the hopes that it would give his poetry a better chance of being published. A few years later, Marvel came under fire for having a white comics writer that used the pen name Akira Yoshida, including while writing stories set in Japan.

For hundreds of years, women have written under men’s names or ambiguous initials to try to avoid sexist limitations on their work, both from the publishing industry and from readers. (This is very different from when male authors use ambiguous pen names when writing domestic thrillers.) It has been a way for authors to gain access to spaces where they otherwise would have been denied the opportunity.

Enough background information, though: let’s get into the fun stuff! This quiz asks you to match the author to their pen name. They range from classic authors writing hundreds of years ago to those who are still putting out books now. How many can you get?