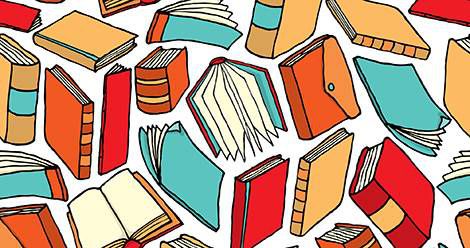 This giveaway for illustrated books is sponsored by Andrews McMeel Publishing, publisher of It’s All Absolutely Fine by Ruby Elliot. 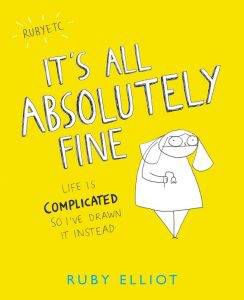 It’s All Absolutely Fine is for anyone who struggles with not feeling absolutely fine. Tackling the not-so-simple subjects of depression, anxiety, and body image, Ruby’s unique, humorous, and brutally honest voice and eccentric illustrations will remind readers that they’re not alone—and that it’s okay to struggle and to talk about struggling.

Hondo and Fabian by Peter McCarty

A Child of Books by Oliver Jeffers and Sam Winston

Adulthood is a Myth by Sarah Andersen

Animalia by Graeme Base

The Owl and the Pussycat by Jan Brett

Brown Bear, Brown Bear, What Do You See? by by Bill Martin Jr. and Eric Carle

Chickens Aren’t the Only Ones by Ruth Heller

The Country Diary of an Edwardian Lady by Edith Holden

Curious George by H. A. Rey and Margaret Rey

Eloise at The Plaza by Kay Thompson and Hilary Knight

Emily the Strange by Rob Reger

The Sandman series by Neil Gaiman

Harry Potter and the Sorcerer’s Stone: The Illustrated Edition by J.K. Rowling and Jim Kay

Hope for the Flowers by Trina Paulus

Horton Hears a Who by Dr. Seuss

The Adventures of Huckleberry Finn: Illustrated by Mark Twain and E. W. Kemble

Hyperbole and A Half by Allie Brosh

Idylls of the King by Alfred Tennyson and Gustave Doré

Swatch: The Girl Who Loved Color by Julia Denos

Odd and the Frost Giants by Neil Gaiman and Chris Riddell

Oh The Places You Will Go by Dr. Suess

The Phantom Tollbooth by Norton Juster and Jules Feiffer

The Gigantic Beard That Was Evil by Stephen Collins

The Griffin and Sabine series by by Nick Bantock

The Hobbit by Charles Dixon and J. R. R. Tolkien

The Library by Sarah Stewart

The Marvels by Brian Selznick

The Mysteries of Harris Burdick by Chris Van Allsburg

The Red Tree by Shaun Tan

The Sculptor by Scott McCloud

The Velveteen Rabbit by Margery Williams and William Nicholson

The Walking Dead, Vol. 1 by Robert Kirkman and Tony Moore

This Book Loves You by PewDiePie

Where the Sidewalk Ends by Shel Silverstein

The Complete Tales of Winnie-The-Pooh by A. A. Milne

Hellboy by Mike Mignola and Various

Cat Versus Human by Yasmine Surovec