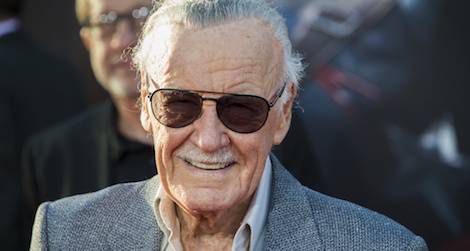 Can I embarrass myself for a moment? Cool, thanks. In the fourth grade, I was tasked with doing a report on a person I admired. This was back in those halcyon days of 1993 and a naïve, wide-eyed nine-year-old me considered himself a big time comic book fan. How could I not? This was the era of Broken Bats, Reigning Supermen, and pouches galore. Remember when Shatterstar plunged his swords through Juggernaut’s eye sockets? Oh man, that was nine-year-old Alex’s jam. This is all to say, comics stoked my imagination and held my attention captive better than just about anything, but all I really knew about them was that they were produced by a company. I guess I assumed they were the result of a sort of brain trust and that everyone who worked at the company might as well be nameless, as part of a sacrifice towards the greater good of telling awesome stories featuring the real stars, the characters. Except for one inescapable name. (Here’s the embarrassing part): 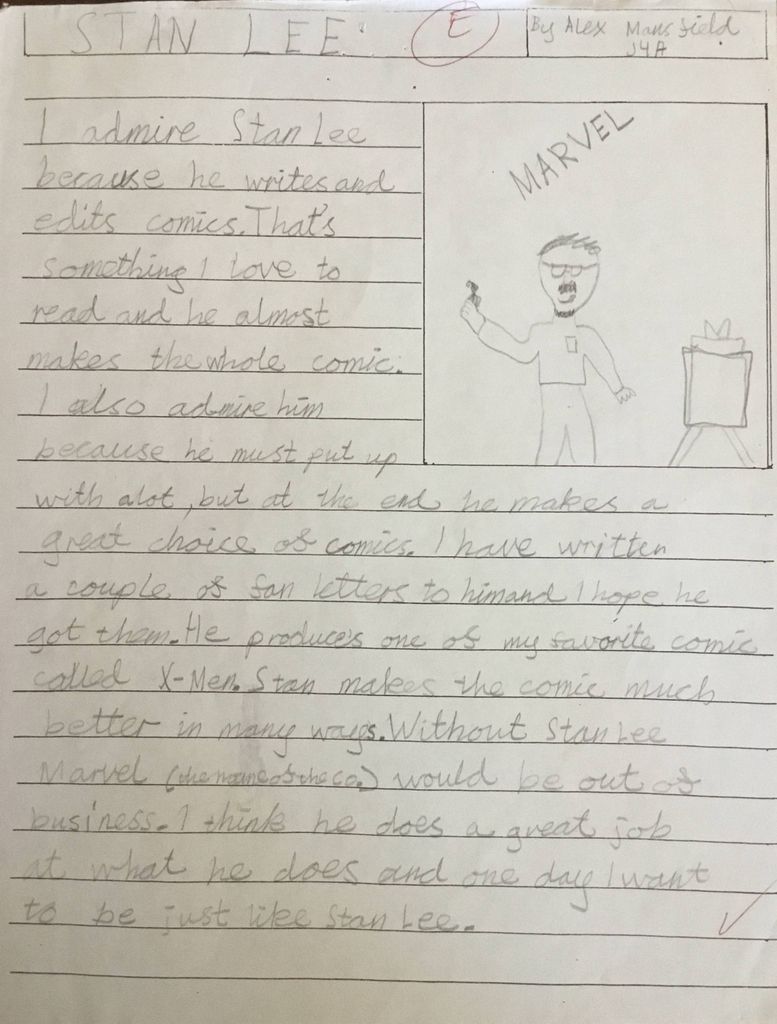 Wow. Okay, let’s just…wow. By my calculations, I am mortified by rediscovering this Stan Lee puff piece for roughly thirty-two million reasons. I can appreciate the fact that I was nine, but whoa dude, were you ever off the mark here. There it is, the perfect (read: imperfect) result of the lovable huckster’s carnival barking. Of course, there’s something charming about effusing over the person I considered to be responsible for my favorite things at that formative stage. No nine-year-old should really understand the finer nuances of corporate structuring, right? Right. The uncomfortable cringe permeating my thirty-three-year-old self is the result of perspective, not some sort of bizarre temporal self-loathing.

Breaking down exactly what parts of this now fill me with dread, it’s pretty easy to identify the worst offender here: did I really draw Stan Lee holding a paintbrush in front of an easel? Is that a paintbrush or some sort of lit candle? What is happening? I’m not even sure what part of this image to correct first, but I’m at least slightly relieved to see that I didn’t credit Stan with being an artist in the actual written portion. It’s most likely that my own artistic skills met their limit in trying to decide how to depict someone editing, but still, not a good look, young-me. Furthermore, it’s that second sentence that makes me scream aloud to the infinite void, “I didn’t know what I was saying! I was but a child!” Yeah, saying “he almost makes the whole comic” at a time when he was serving primarily in the role of Publisher is pretty hard to read now, without even getting into the greater discussion of how much of the credit he deserves for many of the comics his name is attached to.

Stan Lee’s role in shaping Marvel and the superhero comic industry as a whole is well-documented, as is his tumultuous relationship with his collaborators. Marvel Comics: The Untold Story by Sean Howe is an excellent place to start if for some reason you haven’t already given it a read, as is this piece by Abraham Riesman for Vulture from last year. I’m not interested in trying to define what Stan Lee’s legacy is or what it should be, but I am fascinated by looking at my own personal relationship with his place in my favorite hobby. Clearly, I loved Stan Lee. And now, lo these many decades later, I honestly still do. The reason for my embarrassment over this fourth grade project is solely due to seeing that naiveté writ large considering what I’ve learned about Stan Lee’s contributions in the years since; the “Marvel Method” and the subsequent swiping of credit from legendary creators Jack Kirby and Steve Ditko, most prominently. Back in 1993, there was this assumption that almost everything I adored was borne from the mind of this one bespectacled mustachioed wonder. But how could I not think that, what with this emblazoned in virtually every comic book I read growing up:

Like some sort of ontological argument, here is Marvel declaring Stan their unmoved mover overseeing an entire universe. This wasn’t a new practice, that declaration had begun appearing on title pages starting back in the 70s, but for as long as I could read comic books, that declaration greeted me nearly every time I cracked open a Marvel comic. Combine that with items like this: 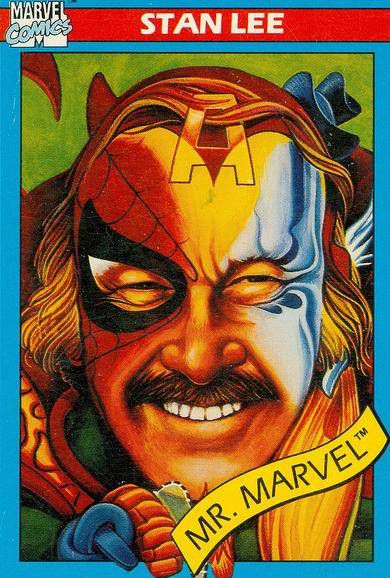 and I saw a grandmaster. What I didn’t know at the time was that Lee was more mascot than mythological curator. I was drinking that Kool Aid like every day was comic book summer camp. Both the man himself and the company he worked for were happy to package this narrative and few kids at the time likely gave a hoot about who that might be hurting as a result.

Stumbling across this old paper of mine has given birth to a surprising deluge of emotions. One can hardly blame a child for admiring someone that you were essentially being told to admire from the get go. He was, in my mind, the hero that literally made heroes. So now, some twenty years later, am I saying, “Don’t meet your heroes, kid”? By no means. My experience here isn’t all that different from coming across an old t-shirt of that boy band you used to think was the height of music or that cherished signed photo of your favorite athlete who turned out to be hopped up on steroids the whole time. It is quite literally a case of “you live, you learn.” None of that means that the feelings I had at that time aren’t valid, however.

Would I have continued to love comic books if Stan Lee hadn’t been placed on a pedestal in such a fashion? Very likely. But it gave me a human face to connect all my youthful wonder to. It hurts to say that now, knowing what I now know about what was really happening behind the scenes, and that Stan has inarguably erred time and again when it came to how overreaching his self-promotion became at the expense of real people. Whatever Stan Lee’s lasting legacy will be, there’s still no doubt that there is one and that parts of it were beneficial to the industry, but nine-year-old me didn’t give a damn about all that. Thirty-three-year-old me does, sure, and yet it’s hard not to be appreciative that believing in Stan’s self-made mythos made me happier. That belief made me care about the medium more than if I had simply thought a factory of automatons was churning out panels and stapling them together. As my paper says, I admired him. Turns out, I was admiring him for some wrongly attributed reasons, but that’s the way these things go. Now, I admire him for different reasons, roll my eyes at him for others, and shake my head in disappointment for others still. Reading the thoughts of my younger self, I have a similar experience of eye rolling and head shaking, but only at the perspective and not the sentiment. Perhaps my views on Stan Lee will change even more with time and I’m not sure what his lasting legacy will be, but I’ll give my nine-year-old-self credit for identifying one key facet that’s right on the money: “I think he does a great job at what he does.”