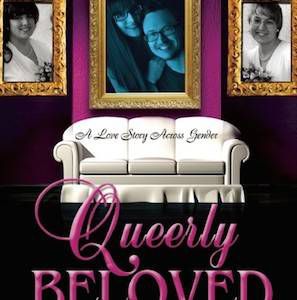 My domestic partner proposed to me in December, and we set the wedding date for May. Other Rioters were also tying the knot, and writing about cool stuff like bookish weddings, invites, decorations, themes. I wanted to get in on the fun through reading, and then writing about, LGBTQ (Lesbian, Gay, Bisexual, Transgender, Queer/Questioning) books that considered marriage. Novels, love stories, fiction, memoir – gay people in love, and getting married. Ok, I realize that was a complicated proposition, as gay marriage is just becoming legal in most places. But where was my gay wedding novel? I asked friends. I asked my favorite blogger, Casey the Canadian Lesbrarian. I did some Googling. And I found just about nothing.

So I dropped the idea, went about my own LGBTQ life-planning, and got hitched. And it really was the happiest day of my life.

Then I got an update from the unlikeliest of places, LinkedIn, letting me know that a writer contact just published a memoir, very cooly titled Queerly Beloved. Let me tell you about this book: it’s written from two points of view, that of Diane and Jacob Anderson-Minshall, partners and co-conspirators. Oh, and gay. And, I might be burying the lead here, but Jacob actually began the relationship as Suzy. So not only is this a co-written memoir about love, navigating a relationship, staying in love, and staying married: it’s the story of how Suzy realized she was a he, transitioned into Jacob, all while married to Diane, who, now more than ever, is my LGBTQ hero. Because I don’t need the story about love, or falling in love. I need the story about how an LGBTQ couple navigates this crazy world, one day at a time, and stays together.

Like Diane, when I first came out I titled myself bisexual. Being with men for the first 20-something years of my life, how was I going to just start with lesbian, full stop? Also, it just seemed easier, in my transitional stage. Then I met Teri, who challenged, well, everything.

Teri transitioned years before we met. Typical of her, to make life easier for me, without even knowing I was to come. It was difficult enough for me to initially embrace this gender-bending all-woman lesbian, at a time when I had just come out and really, really wanted people to know that I was gay, dammit. With Teri at my side, we’re unintentionally passing for straight, with nothing but the weirdest of TMI conversations to clue people in to our queer status. As in, to a waiter presumptuously asking what “he” (Teri) would like: “Actually, we’re both women, Teri just has a thing called hirsutism – basically, hit puberty like a boy and started growing facial hair, and boobs, and yeah, she tried shaving/depilatoring/cutting/waxing but nothing worked so she decided to just be happy with herself, but no, she doesn’t want to be a man, she’s just a woman who looks like a man. And we’re lesbians. So yeah. I’ll have the cheeseburger.”

My first paid freelance writing was with Curve, The Best Selling Lesbian Magazine. My first article was about my own bearded lady love, now my wife. Diane was Curve’s outstanding, utterly approachable, excellent Editor in Chief. There were some emails going around that gave me the vague idea that her life was in a period of upheaval; but I honestly don’t remember Suzy, just Jacob.

They have been married four times. Seen their marriages hated on, legally challenged, voided. And in March 2006, Diane and Jacob got married for the fourth time, pre Supreme Court ruling. For reals, legally, because they could now claim federally protected heterosexual marriage status. I can only hope that one day in the not too distant future, everyone will recognize that distinction as insane.

Subtitled A Love Story Across Genders, Queerly Beloved is an intimate behind-the-scenes account of an extraordinary relationship. Witness Diane and Suzy, both writers, editing an anthology about transitioning. Watch Diane lightbulb onto what her wife is about to go through, before Suzy is able to fully realize it herself. Listen as these two feminist, lesbian activists, (“model gay,” in Diane’s own words) discuss what their relationship will be like if Suzy transitions, how their professional lives will change, how they will be viewed now that one half of them is a man. Sympathize with Jacob as Suzy prepares to tell her parents that their little girl will soon be no more. Empathize with Diane as she loses the light touch of a womans hand caressing her body (imagine, like my mom, whose first question was – WHAT ABOUT THE SEX??), loses late night talk-about-our-feelings sessions, the beautiful blonde woman she fell in love with. And then marvel at her fitting out her partner in stylish threads, schooling Jacob on how a man treats a woman in our social world (“I tried very hard not to let my new husband become an asshole”), standing by her man when anyone tries to talk shit, supporting him while rediscovering and loving him, no matter what. Appreciate the kind of love it takes to get there, and be still, together.

We’re all familiar with Martin Luther King Jr’s. dream. Allow me to take his words one step further. It’s not about the color of our skin; but nor it is about the gender we present to the world, our genitals, testosterone levels, clothing. We fall in love with the person beneath the ever-changing exterior. Someone who feels familiar, makes us laugh, comforts when we hurt, shares our passions, becomes our family.

Jacob: I’m a guy named Jacob who was a once a girl named Suzy, a man who was never a little boy, a dude who went through puberty much later than my peers.

Diane: In the duration of our relationship, I’ve gained and lost nearly 200 pounds, gained wrinkles, lost sight, and gone from a brunette rockabilly chick to a blond cardigan-wearing bookworm. We all change. His just involved his genitals too.

Alison: I found the book I was looking for.