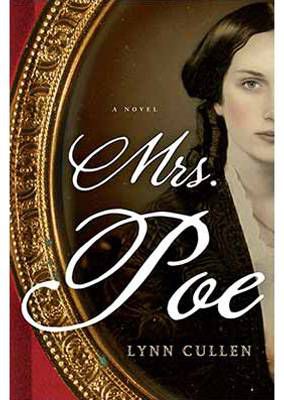 A book came out pretty recently called Mrs. Poe, a historical romance novel of sorts by Lynn Cullen. It’s about a lovetriangle between Edgar Allan Poe, his young wife Virginia, and a poet named Frances Osgood.

Frances Osgood is a somewhat successful poet who is being pushed to write more “gothic,” dark poems along the lines of Edgar Allan Poe, who has become something of a celebrity thanks to recent works like “The Raven,” which rendered him a hit with the local literary scene. Frances has no interest in writing this more gothic style of poetry, she has no great initial interest in Poe himself, and she’s also dealing with the difficulty of the absence of her husband (who, she tells everyone, is “away on business,” which is code for having run out on his family, it seems). When she meets Edgar Allan Poe, though, everything changes. She finds him a compelling and exciting man, and despite her sense of reason, she rapidly finds that she is falling for him…and what’s more, he is falling for her. Unfortunately for their intense attraction, Frances is still considered a married woman by polite society, though her husband is absent…and Poe is definitely married, to young Virginia, a frail and peculiar woman who is his cousin and whom he married when she was thirteen.

There is more to Virginia than initially meets the eye, though. She is more aware than she initially seems, and as the book unfolds, it becomes increasingly possible that she is more menacing than she appears.

It’s a pretty good book. It isn’t a horror novel or even particularly gothic in any regard. More romance than the grave. It’s good romance, though, on the whole. The characters are all compelling, and the use of historical language and style is well-done without seeming cartoonish or trite. It occasionally gets a bit carried away with its overblown prose in the romantic scenes. There’s a great deal of angsty-dialog and impassioned embraces, but it happens in small enough bursts spaced evenly enough apart that it doesn’t kill any of the enjoyment of the book.

One interesting thing about historical novels is their capacity to educate at the same time as they’re telling you a story. Done well, the education happens unconsciously while you focus on reading a terrific narrative. There have been many many historical novels and films which I’ve immediately followed with a massive amount of non-fiction reading and obsessing. It was a novel called Drood by Dan Simmons, all about Charles Dickens, which lead to my ongoing Dickens obsessions (I’ll come back to this in a moment).

The historical element in Mrs Poe was fascinating to me, in that I discovered I actually knew very little about Edgar Allan Poe. I know his work just fine. I’ve been reading and re-reading the stories and poems since I was a teenager, and I find them more impressive with each re-visit. But Poe himself? I knew very little.

For example, I had no idea that he was popular. I didn’t know that he was something of a celebrity, that his work was excitedly received, or that his poem “The Raven” was so popular, he would be invited to parties and then harassed to give recitations of it. I thought all of that, and many details beyond, were really interesting, and I loved that the book was providing me with them, outside of the love story. I quickly resolved to go read some Poe biographies (a whole other problem).

All of this was going just fine until a small, passing scene in which Edgar Allan, his wife Virginia, and Frances, happen to begin talking about the works of Charles Dickens. They go back and forth about him and his amazing writing abilities for a few paragraphs and it’s all well and good…until Edgar Allan Poe joins the conversation to sneer grumpily about Dickens and how much he dislikes Dickens’ style of writing about the poor. Poe sure doesn’t like Charles Dickens, that scene says.

As I said above, I’ve got a long-running Dickens obsession. I’ve poured through countless biographies. I’ve gone back and re-read Dickens biographies from different eras, just to see how other people discussed him. If I have one topic on which I can approach a vague sort of scholarship, it’s Dickens. Moreover, this is the one place I know about Poe, too…and it means I know this dialog is completely wrong.

Poe idolized Dickens in a lot of ways and was not only a tremendous Dickens fanboy, but also something of a Dickens scholar, himself. Poe had written about Dickens many times, had even done a long piece analyzing Dickens’ unfinished novel The Mystery of Edwin Drood. When Charles Dickens came to the United States on one of his two American tours, Poe found out what hotel he was staying at, just so he could meet him. He pressed a bunch of his stories and poems on Dickens, who accepted them mainly to get this creepy-intense stalker-guy to go away and stop bothering him.

(Dickens professed not to care for Poe’s work and not to have read much of it, although it was known that his wife Catherine was fond of it. It probably jarred against Dickens’ own macabre streak).

So the point is, suddenly I’ve read this little handful of paragraphs that I know to be jarringly wrong, and it’s left me wondering about the rest of the book. One of the unspoken rules of historical fiction is that you’re trusting the research put into it. It isn’t a non-fiction history book, true, but it should be sturdy, in those places when it’s understood not to be imagination and creation. In this book, the nature of the people inside it should be accurate, but I’m left wondering, were any of these other Poe details accurate? Has the book given me an interesting toehold into the life of Poe, in addition to a good story?

The answer is: it’s probably just fine. It’s probably accurate enough. That’s the tricky burden of historical fiction, though. You can get the big details right, but supposing you get a small detail wrong? Ninety-nine percent of your audience might not notice or blink, but then you’ll get one weirdo with a massive amount of Dickens on the brain who will notice. So of course, you should try to get every line and detail right, so this doesn’t happen…but where do you draw the line? (Dan Simmons wrote exhaustively how he researched the first Ferris wheel for a novel, trying to work out if it spun clockwise or counter-clockwise. I would argue that, on the whole, this is maybe a bit much. Just don’t make it jump up and down and you’re okay.)

The moral of this story is, I suppose, that you should be as exhaustive about your historical detail as you can without collapsing the story or your forward momentum in writing it.

At any rate, you should go read Mrs. Poe by Lynn Cullen. It’s a fast read and a pretty enjoyable one at that. Just…just close your eyes and turn the page at that Dickens part. Or possibly just be less tedious than me.

(Addendum:  It was pointed out to me, wisely, that Poe died well before Dickens began working on Drood. And of course, I knew that. I got my wires crossed. The references to Poe and Drood come from a book published in 1912, analyzing The Mystery of Edwin Drood, with a long aside discussing Poe’s analysis of Barnaby Rudge. This happened because if you’re gonna publish an article about fact-checking, of course you’re gonna screw up a fact. Sheesh.)