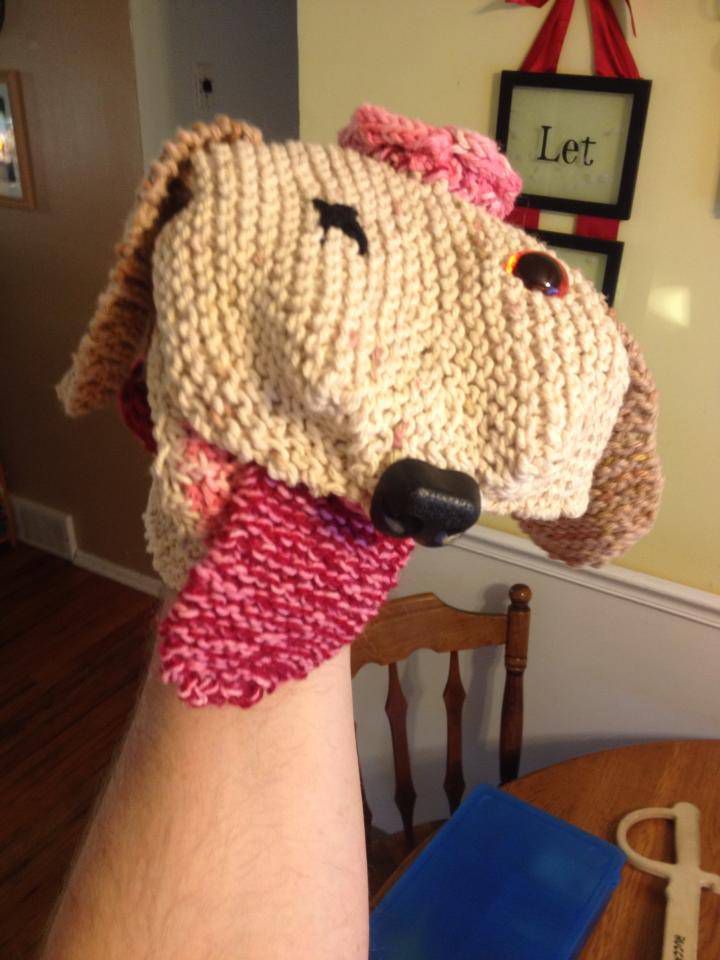 Last August I asked if anyone would knit me some bookish mittens to make it easier for me to travel on airplanes.

Long story short, I have Tourette Syndrome, a very extreme case. It results in involuntarily movements and vocalizations. For some reason, when I board an airplane, I start to scratch. So after one particularly nasty flight, during which my face took a laceratin’, I decided that, rather than whine, I’d ask if any of my blog readers could knit me some protective mittens. .

A flood of support poured in, and I was promised mittens by the passel. The finest pair is, hands down, these zombie dog and cat mittens knitted by Angela Lovell, who heard me mention my crazy crush on Pet Sematary during a stop on the book tour.

The picture doesn’t really do it justice, but that pink hat on top of his head is an exposed brain. It is lovingly knitted and includes grooves, axons, and synapses, all in various states of decay, of course. One of his eyes is a cute little X.

When I asked her how long it took to knit one of these mittens, I might have misheard, but I think it was about thirty hours. I immediately said “You should sell these.”

I hope you’ll join in the chorus and try to bully her into making herself rich with these.

Slightly more gruesome with the lolling eyeball, but still an adorable labor of love.

One thing that doesn’t show up in this picture is the keychain. It says “church,” which was the cat’s name in Pet Sematary. And on the back it says, “If missing, call 555-1408,” 1408 being the title of another Stephen King story I loved.

So if you’re in the market for something morbid, yet cuddly and cozy, you know where to turn. Absolutely the best book-related gift I’ve ever received, besides books, of course.