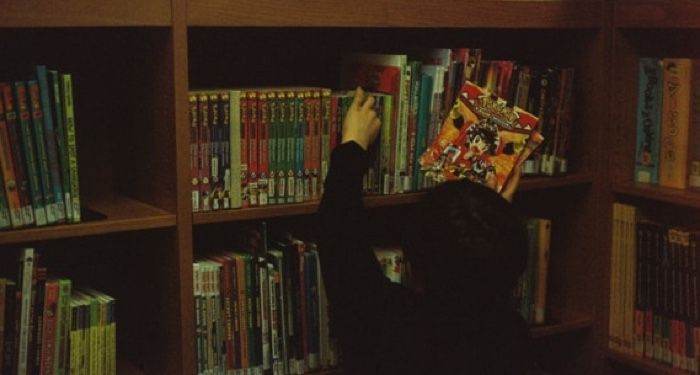 The library was unlike any other room in the school. In my mind, it was a windowless room on the second floor, older than the rest of the school felt (with the exception of the old gym; we a had new, shiny gym and an “old” gym with its faded creaky wood and ghastly lighting). I don’t recall now whether the library was actually windowless, but it did lack the harsh fluorescents of a regular classroom. Perhaps that’s why I remember it as this dimly lit, soft, warm space. The safest space in the school.

I was a library volunteer at my middle school when I was 12. How long, I couldn’t tell you. How I landed such a role, I couldn’t begin to hazard a guess. I have no memory of how it began, only that it happened, and being a library volunteer in that old, enclosed little library was the single greatest light of my entire time in school.

I was a voracious reader. I could mute an entire cafeteria full of noise and overstimulation with the right book. I was big into Brian Jacques and K.A. Applegate back then; I snuck garage sale copies of Stephen King and V.C. Andrews past my parents and read them on the school bus. I was no stranger to libraries, either; I grew up in them. When my mom and I lived with my grandparents, we didn’t have the space or the money for a book collection, so Mom would take me to the library in our neighborhood to borrow as many as they would allow at a time. As I got older, it never occurred to me to ask anyone for recommendations on a book; I always picked something out if the summary or the cover hooked me (this is how I found Animorphs at the Scholastic Book Fair. Best decision of my life).

To actually be part of the inner workings of a library was a gift that 12-year-old me desperately needed. Whoever either offered that opportunity to me or actually listened when I asked for it, I owe them a debt of gratitude. If I didn’t have such vivid memories of helping out in the library, I would think I dreamt it up.

So what does a middle school library volunteer do? Back then, put away the books from the return cart. Help students find a book using, yes, the card catalogue. Tidy up the low wooden tables after a program ended. My favorite task was putting away the books from the return cart. I could take my time finding the book’s home based on the call number, and memorize titles that looked interesting so I’d know where to find them later if I wanted to borrow them. I gained a more extensive view of how many kinds of books a library has to offer, even a little middle school library like ours.

Our librarian was a sweet old lady who wore cardigans and long skirts and kept her eyeglasses on a chain. I can’t remember her name, but I can remember her soft voice and her patience. I sorely needed that back then; I needed the reminder that adults could also be patient and kind. She was the one who pointed me in the direction of Nancy Drew and the Hardy Boys, and I loved them because of how very different the writing style and their lives were from my present. I dug deeper into mythology because some other kid really loved mythology and I was always re-shelving their returns on Greek, Roman, Egyptian, and Norse mythology. I discovered Shel Silverstein for the first time in that library.

It wasn’t so much the volunteer experience that was the most special part of it for me, although that was the first meaningful volunteering I had ever done; it was what the library represented. It was being surrounded by worlds I could escape to, and the library itself had become one of those worlds. I was an extraordinarily shy, anxious preteen sliding into depression. I was bullied…often. Every week at the bus stop, off and on by kids who were probably just as miserable as I was, but they sent it outward while I turned it inward. My mother had married a few years earlier, and I had a 12-month-old sister and 3-year-old brother at home. My house was loud and chaotic and overwhelming to someone who thrived in solitary, quiet spaces. School, too, was loud and chaotic and generally unpleasant for such a socially awkward kid with a penchant for anxiety attacks that would later become full blown panic attacks.

But not in that library.

In that library, I was an integral, important member who kept it functioning during my little slice of time there. I could help the librarians who helped me find my life’s greatest joy. I was able to do something I enjoyed in peace. I gained respite at the same time I gained a purpose. The care of and the reading of books. I became more myself there than anywhere else.

No other library in my school years could compare to this one; not high school, not college. I utilized those libraries, to be sure, but none could compete with what I gained from my middle school library. The memories are so visceral that recalling them now, I can feel the stretch in my back when I reached up high to re-shelve a book about drawing birds, and smell the old paper of the yellow-covered Nancy Drew book I knew I’d eventually borrow. I can hear the librarian tell me in her soft voice that the bell had rung, go along to your next class, thank you for all your help.

Never underestimate the value of a library to a child. That once child clung to her time there like a lifeline to get through the school year, and the memory comforts me even now.