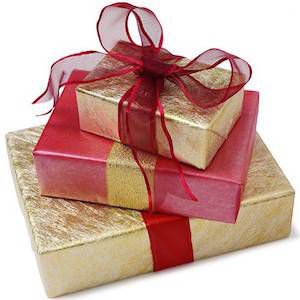 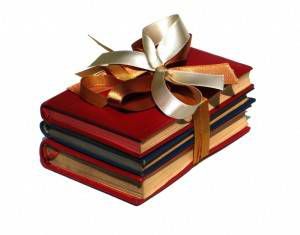 In this giveaway, we asked you to submit the story of the most meaningful book you’ve ever given someone as a gift. We’ve narrowed the field down to three finalists, each of whom win copies of The Martian by Andy Weir and Bonita Avenue by Peter Buwalda. Now it’s time for you to vote on your favorite! The winner will receive a pack of 10 books from the folks at Read It Forward! Voting will end 11:59PM EST, Tuesday, January 20th.

When I was very little, one of my mother’s most valued possessions was a set of Little House on the Prairie books and she read them all to me many, many times.

We were quite poor. My mother, however, made it seem not so bad by saying that we were doing things “just like Laura and Mary.” If our electricity got turned off again? It was just like Laura and Mary. Tight Christmas? “Remember the Christmas that Laura and Mary got tin cups, a little cake, a candy stick, and a penny and they were so happy? Christmas doesn’t have to be huge to be special.” We lived overseas for a few years (my dad was in the military) and every time it was hard for one reason or another, we talked about how, many times, Laura and Mary lived so far away from their family and everything they knew, as well. My mother made nearly all my clothing for quite some time and she talked about how Laura’s Ma made her clothes, as well.

Those books – and the creativity of my mother – helped make life tolerable when it otherwise would not have been.

The years went on, my mother had more children. She worked more. She didn’t have time to read to us as much nor did we all take care of her books as well as we could have. By the time I was a pre-teen, the books were all missing, destroyed, or badly damaged.

One year, I babysat to make money for Christmas. Sometimes, I was babysitting nearly all weekend. Eventually, a week or two before Christmas, I had enough money for what I wanted to buy: a new set of Little House books for my mother.

When she opened them, she immediately started crying. She loved those books. I don’t think I’ve ever given her a gift that made her happier than that one did.

But the story doesn’t end there.

The day after Christmas, there was a really bad ice storm with lots of snow. It knocked out power to thousands of people in the area. We lived in an area that wasn’t prepared for cold weather and, because of the location of her home, we were some of the last people in the area to get power back – more than a week later. Once again, we were like Laura and Mary, reading by candlelight, the kids sleeping together in the main to stay warm.

We read through the entire Little House series before the electricity came back on.

Growing up, I was an avid reader. My older brothers, two people who have always had more of an affinity for numbers, hated reading and thought I was crazy for loving books as much as I do. When it came to my oldest brother (almost 10 years older than me), I accepted that. But the other one, Zach, and I were much closer in age and much closer as friends, and I wanted him to understand. He was, and still is, the smartest person I know, so I couldn’t understand why he didn’t like reading. But no matter what book I bought him, it ended up collecting dust on a shelf.

After failing his first year in college, Zach became lost, and I had to watch him float through life without any idea of what his purpose should be. He was unemployed for a time, and couch-hopped from his friend’s house, to our parents’ house, and finally to my house. In the first year we lived under the same roof, I gave him a book. Carl Sagan’s Cosmos. He was always watching the Discovery and History channels, and seemed interested in space (at least in a sci-fi sense) so I thought he might actually give it a try. Much to my surprise, he devoured it with a voracity I didn’t know he had. So I bought him more books in the same vein, and he devoured them too with the same enthusiasm.

Now, several years later, I cannot express the extent of pride I have for what my brother is doing with his life. He is on his way to obtaining a degree in astrophysics (which is mind-blowing to someone like me who can’t math). He’s found a love for reading, still only nonfiction, and mostly books about space, physics, or his hero, Einstein. He has dreams of working on the large hadron collider, and I have no doubt he will! I believe my brother will one day make amazing discoveries. I can’t say whether or not I, or Mr. Sagan, were the ones who lit the spark that started his new life journey, but I like to think that book might have given him a little push in the right direction. At the very least, he’s discovered that books can be one of the best joys in life, and that’s worth enough on its own.

My 8 year old son is dyslexic. A crushing blow to an avid bookworm parent. We knew something wasn’t connecting with reading, even in preschool. He doesn’t see letters backwards, but doesn’t process print on paper the same way we do. Plunging forward, we had him tested and sure enough the most brilliant of inventions, print on paper, had a nemesis. He hated reading. My son would try and try to sound out letters, remember letters and try to write his name. He hated reading but never gave up. Our school helped put a support system in place for him to improve and gain confidence reading. Over time, with a lot of motivation, tears, bribes, and special teachers, he has found something.

My intelligent and dyslexic son has found joy. He has found joy and connected with a book he has started to read on his own. This book, given to him for Christmas, is Stuart Goes to School by Sara Pennypacker. My son has found a connection with third grader Stuart. He started reading and slowly, sounding out words familiar and unfamiliar to him, he got really excited! He was reading a book with chapters on his own! He didn’t have to wait to listen to an adventure at bedtime anymore and it wasn’t homework, either! He was reading for fun! He was reading to his Dad to share the adventure of Stuart with him. I am holding onto all of my hiking and mountain adventure books for him. One day he will read one and bring it with him on his own adventures. Stuart Goes to School is the most meaningful book I’ve given. My son has found the joy in reading.