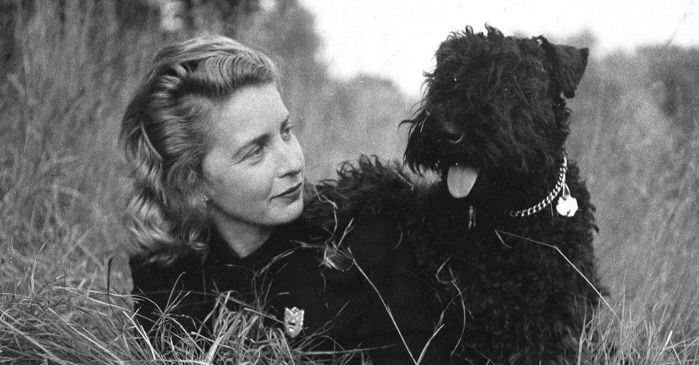 Margaret Wise Brown, noted children’s book author and educator, is best known for writing the nursery classic Goodnight Moon, as well as a host of other children’s books that pair Brown’s gentle text with soothing illustrations. But beyond her books, she was also an international traveler and volatile romantic who wrote for children in a way that was revolutionary for her time. While Brown’s legacy of “the quiet old lady whispering ‘hush’” might have created a public image of her as docile and domestic, her life was anything but predictable.

Born in 1910 in Brooklyn, New York, Brown was the middle of three children and attended several schools as a child before getting her B.A. in English from Hollins College in Virginia. Brown then became an educator at Bank Street Experimental School, which was known for its unique approach to childhood literacy. Emphasizing the “here and now” of childhood learning, the school focused on realism in children’s literature and this, in turn, influenced Brown’s writing and the topics of her books. While at Bank, Brown began writing for children, and her first children’s book, When the Wind Blew, was published by Harper & Brothers in 1937. Brown would eventually leave the school and would go on to publish dozens more children’s books, before suddenly dying of an embolism in while on a book tour in France in 1952. After her death, many more of Brown’s works were posthumously published.

While much has been written about the woman behind Goodnight Moon, there are still parts of Brown’s story that are not as well known. Read on for more interesting facts from her life.

She Dealt with Periods of Depression

One of the key biographies of Brown is Amy Gary’s In the Great Green Room: The Brilliant and Bold Life of Margaret Wise Brown, which discusses Brown’s life from childhood in Brooklyn to her death in Nice, France. In Gary’s chapters on the author’s childhood, we learn that she was prone to depressive episodes, during which she would isolate herself in her room. She was also characterized as “stubborn” as a child, with a nursemaid once dunking her in ice water after she refused to complete a task, though it was noted that this punishment had little effect on Brown’s spirited nature. Additionally, Brown as an adult was criticized by one of her partners for being unsure of herself, and for her interest in the field of psychoanalysis.

She Gathered Lots of Nicknames

Brown attended a variety of schools in her lifetime, including boarding schools in Switzerland and Massachusetts, and made a variety of friends at these places, as well as during her long and varied career. To her high school classmates, she was “Tim” for the timothy (hay) color of her hair. To her fellow teachers she was “Brownie,” and to her partner Michael Strange she was “the Bun.” Strange and Brown in particular had a tumultuous relationship, with Brown writing in her diary that Strange had “angry eyes” and could be spiteful. Strange, meanwhile, was critical of Brown’s self-doubt and perceived weaknesses. (For more on Brown’s turbulent romantic relationships, check out this write-up.)

She Originally Wrote for Adults

When Brown moved to New York City after college, it was with vague ambitions that the frenetic pace of city life would guide her toward being a great novelist, or at least one that made an impact on the city’s literary scene. However, her entries into the world of adult literature were largely unsuccessful and included a collection of short stories that failed to garner interest from publishers.

She Struggled as a Teacher

When Brown’s literary career failed to take off, she accepted a position at the Bank Street School as part of their teacher training program. Bank, which was then based in Greenwich Village, was a hotbed of new ideas about the education of young children. Run by the educational scholar Lucy Sprague Mitchell, the school worked to apply principles of scientific thought and inquiry in determining best educational practices. In this environment, many of Brown’s early ideas about the reading habits of children, and what kind of stories they enjoyed, were formed. Though her time as a teacher certainly had an impact on Brown’s writing career, when it came to her actual work as an educator, she received less than glowing reviews from the school’s administration. A 1936 evaluation of her teaching mentioned that, while she had a gift for connecting with children on an individual level, she struggled to stay focused when leading a lesson. The evaluator also noted that Brown was “fixated” on words and that she was often lost in daydreams and oblivious to the group dynamics of her classroom.

She Had Some Ambivalent Feelings About Kids

Perhaps related to her struggles as an educator, were the feelings Brown expressed about children as an age group. A lot of clickbaitish articles about Brown describe her as “hating children,” and while there’s no way to know how Brown truly felt, I personally think it had more to do with her inclination to respect children as individuals, than a dislike of them. In discussing writing for children, Brown stated that “the attempt to amuse children by presenting them with the strange, the bizarre, the unreal, is the unhappy result of this adult blindness.” While she didn’t care for children in groups, her books show deep respect for a child’s learning process and a wish to give both children and their parents stories to connect with through her writing.

Her Books Were Radical for Their Time

When Brown began publishing, most children’s books were heavily moralizing and presented stories that bore little or no resemblance to a child’s everyday experiences. By contrast, the gentle illustrations and almost hypnotic language of Brown’s books connected with how she observed children learn and how they spoke to those around them. Her use of simple and repetitive language, sensory details, and realism were all ahead of their time and caused some in children’s literature to shun her work. In particular, Anne Carroll Moore, the head children’s librarian at the New York Public Library, so hated Goodnight Moon that it did not appear in the library’s children’s collection until 1972, 25 years after it was published.

She Spent Money Almost as Fast as She Earned It

When Brown received her first check for a book, she spent it not on food, rent, or bills, but on an apartment’s worth of fresh flowers. According to her, this made her feel celebrated as an author. She was also known for blowing through entire advances at once, with purchases such as a Chrysler convertible and luxurious cruises to Europe.

She Was Also a Skilled Editor

In addition to being a prolific author, Brown also encouraged other writers and illustrators of her era. In 1937, she was hired as an editor at W.R. Scott, through a connection with Lucy Sprague Mitchell. Brown saw children’s literature as “one of the purest and freest fields for experimental writing” and brought her focus on modernism to the publishing world. During her time in publishing, she encouraged several well-known writers, including Gertrude Stein, to write and publish children’s books.

When Brown died suddenly of a blood clot, she left behind reams of letters, diaries, and typewritten notes. Most of these ended up with her sister Roberta who, after failing to find an interested buyer, stored them in a cedar trunk in her hayloft. In 1990, Amy Gary began unearthing these as part of her research for In the Great Green Room, though all of Brown’s personal writings have yet to be collected at a central location.

When Brown unexpectedly died in 1952, she had willed the rights to some of her works, including Goodnight Moon, to Albert Clark III, her neighbor’s 9-year-old son. Clark’s mother and Brown had become friends at the Bank School and remained close throughout Brown’s life, including living right beside each other. Unfortunately, the legacy of the gift was more of a curse for Clark. Despite the book’s commercial success, he squandered most of the money he received and was in and out of jail before developing Alzheimer’s. Interestingly, Clark believed that the reason Brown left him the rights was that she was, in fact, his biological mother. However, this claim has been disputed by both Brown’s biographers and Clark’s own family.

Why is it that the life of Margaret Wise Brown stands out as so atypical when set against the books she produced? After all, love affairs, luxury purchases, and a dislike of cloying sentimentalism are hardly unusual traits, especially for an artist of the 1920s and ’30s. Perhaps it is that the scenes presented in so many of her works are calm and placid, compared to the chaotic and unusual life she led.

Like many authors for young people, Brown was decidedly ahead of her time. Her books showed a coming embrace of realism and sensory description in stories for children and those trends now influence not only books that are published for young readers, but also how we think about children and their reading preferences. Through her work as both an editor and a writer, Brown encouraged the embrace of new forms of expression in the same way that children’s books and YA novels often serve as the vanguards of new publishing trends today. Through Brown’s work, children were given the opportunity to engage with books in a more intimate way and her legacy endures today with the millions of children who fall asleep listening to the old lady whispering “hush.”