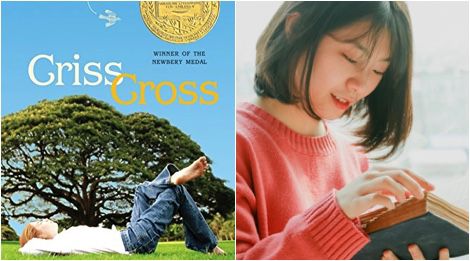 Elizabeth Bastos is a nature contemplative. 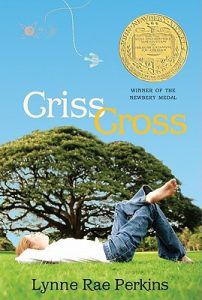 It is my firm belief that one never matures much past middle school emotionally. I remember 6th grade like it was yesterday and not an alluvial flow in geologic time fossilizing the remains of my egg salad sandwiches that my olfactorially hypersensitive peer group said “stunk up the lunchroom like nerd farts.” Nerd farts—now that is a concept that needs unpacking. Lynn Rae Perkins, winner of the Newberry Medal—I challenge you. There is something about my late ’70s, Western Pennsylvania childhood that you just get.

When I picked up Criss Cross it was a home-coming. Here was the feeling captured in words of being the only kid with an egg salad sandwich! Here were nerd farts—not specifically, but Hector seems like the kind of character, a contemplative, who would deeply engage with me on the subject. Bless him.

I read Criss Cross in one go in the children’s section of the main branch of the Cambridge Public Library while my children were engaged in a community Lego build, in mid-July last summer, with afternoon’s golden light streaming through the large windows and was transported to mid-July, Pittsburgh, 1979. It was heavenly. The book’s pages smelled of graham crackers and milk. Though perhaps that smell was being emitted by the toddler next to me, sleeping in a stroller.

Hector reminded me of a less tidy, more funny, more complicated version of Charlotte’s Web’s Wilbur. Reimagined as an animal, I perceive Hector as groundhog. Of course, groundhog is also what I perceive in myself.

The book is a triumph of dreamy, character-development goodness for YA readers and perpetual adolescents like myself. Nothing happens except that a necklace is lost. A necklace is found. And there is imperceptible, powerful growing up. The way first spring daffodil greens cause frost heaves and the ground to buckle.