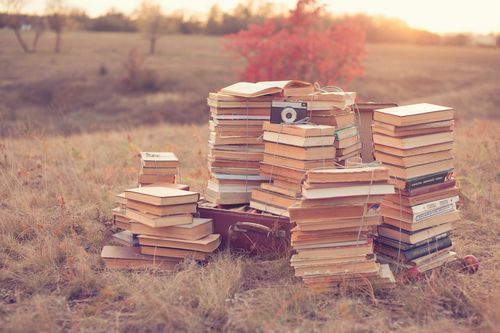 Books and fall are always a lovely combination. Reading Edgar Allen Poe stories or a massive literary masterpiece that has one traveling into another time and space are fall traditions as sacred as Thanksgiving.

The passages below celebrate the upcoming fall season and beg the question: do we love the autumn for its magnificent colorful landscapes, or is autumn the season of memory and regret?

“Life starts all over again when it gets crisp in the fall.” —F. Scott Fitzgerald, The Great Gatsby

“The autumn leaves blew over the moonlit pavement in such a way as to make the girl who was moving there seem fixed to a sliding walk, letting the motion of the wind and the leaves carry her forward…The trees overhead made a great sound of letting down their dry rain.” —Ray Bradbury, Fahrenheit 451

“Autumn seemed to arrive suddenly that year. The morning of the first September was crisp and golden as an apple.” —J.K. Rowling, Harry Potter and the Deathly Hollows

“Aprils have never meant much to me, autumns seem that season of beginning, spring.” —Truman Capote, Breakfast at Tiffany’s

“Autumn is a second spring when every leaf is a flower.” —Albert Camus

“It was one of those perfect English autumnal days which occur more frequently in memory than in life.” —P.D. James, A Taste for Death

“Why is summer mist romantic and autumn mist just sad.” —Dodie Smith, I Capture the Castle

“I’m so glad I live in a world where there are Octobers.” —L.M. Montgomery, Anne of Green Gables

“I cannot endure to waste anything so precious as autumnal sunshine by staying in the house.” —Nathaniel Hawthorne, The American Notebooks October 10, 1842

“His beard was all colors, a grove of trees in autumn, deep brown and fire-orange and wine-red, an untrimmed tangle across the lower half of his face. His cheeks were apple-red. He looked like a friend; like someone you had known all your life.” —Neil Gaiman, Fragile Things: Short Fictions and Wonders

“As Franny walked on, the neighborhood smelled like patchouli and curry. It was the end of summer and everyone who could be out of the city was.” —Alice Hoffman, The Rules of Magic

“The house was very quiet, and the fog—we are in November now—pressed against the windows like an excluded ghost.” —E.M. Forster, Howard’s End

“You expected to be sad in the fall. Part of you died each year when the leaves fell from the trees and their branches were bare against the wind and the cold, wintery light. But you knew there would always be the spring, as you knew the river would flow again after it was frozen. When the cold rains kept on and killed the spring, it was though a young person died for no reason.” —Ernest Hemingway, A Movable Feast

I cannot but remember
When the year grows old—
October—November—
How she disliked the cold!

She used to watch the swallows
Go down across the sky,
And turn from the window
With a sharp little sigh.

And often when the brown leaves
Were brittle on the ground,
And the wind in the chimney
Made a melancholy sound,

She had a look about her
That I wish I could forget—
The look of a scared thing
Sitting in a net!

Oh, beautiful at nightfall
The soft spitting snow!
And beautiful the bare boughs
Rubbing to and fro!

But the roaring of the fire,
And the warmth of fur,
And the boiling of the kettle
Were beautiful to her!

I cannot but remember
When the year grows old—
October—November—
How she disliked the cold! —Edna St. Vincent Millay, When the Year Grows Old

“Is not this a true autumn day? Just the still melancholy that I love—that makes life and nature harmonise. The birds are consulting about their migrations, the trees are putting on the hectic or the pallid hues of decay, and begin to strew the ground, that one’s very footsteps may not disturb the repose of earth and air, while they give us a scent that is a perfect anodyne to the restless spirit.” —George Eliot

“At no other time (than autumn) does the earth let itself be inhaled in one smell, the ripe earth; in a smell that is in no way inferior to the smell of the sea, bitter where it borders on taste, and more honey-sweet where you feel it touching the first sounds. Containing depth within itself, darkness, something of the grave almost.” —Rainer Maria Rilke, Letters on Cezanne