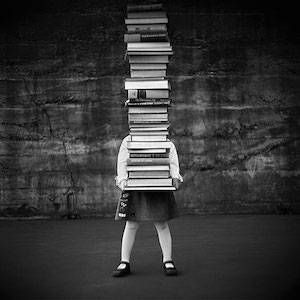 This is a guest post by Cristin Stickles. Cristin spent a decade in children’s book publishing and is now the Children’s & Young Adult Buyer at McNally Jackson Books in Manhattan. Her greatest professional accomplishment is writing the marketing tagline “Eat Prey Love” for a teen zombie romance novel. Follow her on Twitter @ThtsWhatSheRead.

Age 14: My best friend is a boy from marching band who has a lot to say about Lord of the Rings. His parents own a children’s bookstore and ask me to come work for them. On my first day at the store we host an event for the author of the newest line of American Girl books. I wear a button that says MEET ADDY and stand outside the store as three hundred people filter through. My new boss makes a lot of “baptism by fire” jokes that I don’t understand until later when I ask my mom what that phrase means over dinner.

Age 15: My greatest disappointment about my job is that, at 5’10, I am way too tall for any of the book character costumes. All of this changes when a height-appropriate coworker spends too much time in one of the costumes and nearly faints from heat exhaustion, and I am called up to crouch inside of the Clifford suit for the rest of the scheduled appearance time. My Dad happens to visit the store while I’m sweating it out inside the Big Red Dog and has his picture taken with me. My bosses relent about the height restrictions, and our refrigerator becomes covered in photos of my dad alongside a wide array of children’s book characters. Visitors to our house who don’t know about my job assume my dad is delightfully quirky and just loves having his picture taken.

Age 16: Chris Van Allsburg does a signing at the store, and I’m working up the nerve to tell him how much I love The Mysteries of Harris Burdick when one of my coworkers asks if he’d like coffee or a soda. “I don’t put caffeine, or toxins of any kind, in my body” he snaps. It occurs to me for the first time that writing children’s books doesn’t automatically make someone a nice person.

Age 17: The store books an event with the author of a new fantasy series; as she is a complete unknown, my boss has her do a school visit in anticipation of us not having a crowd for her store appearance to make sure they sell at least a few copies. In a book signed to the owners’ daughter, the author writes “Dear Catie- You said that you hate reading but I hope you try this one- it’s not too long, and you might like it. Best, JK Rowling.”

Age 21: In the three months since I graduated from college, my main hobby has been making fun of Christopher Paolini based on a New York Times article wherein he describes building a hobbit hut in his backyard. He signs at the store during his tour for Eragon, and I am forced to begrudgingly admit that he seems to have his act together. When he returns on his next book tour he inscribes an Italian edition of Eragon for a female fan with “Chow Bella” and I cheerfully take it all back.

Age 22: During an author event with Julie Andrews, a Marketing Director at HarperCollins gives me her card so I can send her my resume. This turns into my first publishing job, and my mother starts telling people that Mary Poppins is personally responsible for my career.

Age 23: I say exactly nothing to Maurice Sendak during a shared three-floor elevator ride.

Age 25: Our hometown newspaper runs a picture of me dressed as a wizard at a midnight release party for Harry Potter 6. Three pages later there was a picture of my brother in his pilot’s flight suit with a caption saying the Navy had promoted him to Lieutenant. Whenever anyone mentions the juxtaposition my mom says “they both do what they love.”

Age 26: During my first week at Random House Frank Portman visits the office and sings a song he had just written called “Cingular Wireless- Worse Than Hitler” that will inform my cell phone carrier choices for years to come.

Age 27: James Dashner thanks me for an email I sent his editor a year earlier about how much I loved The Maze Runner that I did not know had been forwarded on to him. I return to my desk to search my Sent file and find out that said email included the phrase “is this guy seriously a Mormon accountant?”

Age 28: On the last night of sales conference, our head of sales tells me I can sit at the same dinner table as Jennifer Donnelly only if I promise to wait for her to finish eating before I ask her to sign my galley of A Northern Light.

Age 29: I’ve worked at Penguin for less than a year when I meet Harlan Coben at a BEA party. I mean to say “I grew up in the town next to yours” but it comes out as “I know where you live.”

Age 30: Kristin Cashore visits the office and I fail to mention that her books made me realize that I don’t hate all fantasy, I just hate crappy fantasy.

Age 31: I go back to my hometown bookstore for an Eric Carle event and cheerfully show off the fact that I unintentionally memorized the ISBN for the Very Hungry Caterpillar board book (9780399226908) while tracking its sales for Penguin.

Age 32: I’ve been the children’s buyer at a NYC indie store for under a year when we host a game of Illustrator Pictionary. Daniel Handler shows up unannounced to support his friend Jon Klassen. Handler gleefully acts as host for the entire event. By the last round, the back row of seats is filled with booksellers who should have clocked out long ago but couldn’t tear themselves away from the spectacle.

Age 33: Macmillan confirms RL Stine for a Halloween event. When I call my brother to tell him, he thinks that some tragedy must have befallen one of our parents because I’m hyperventilating so hard.