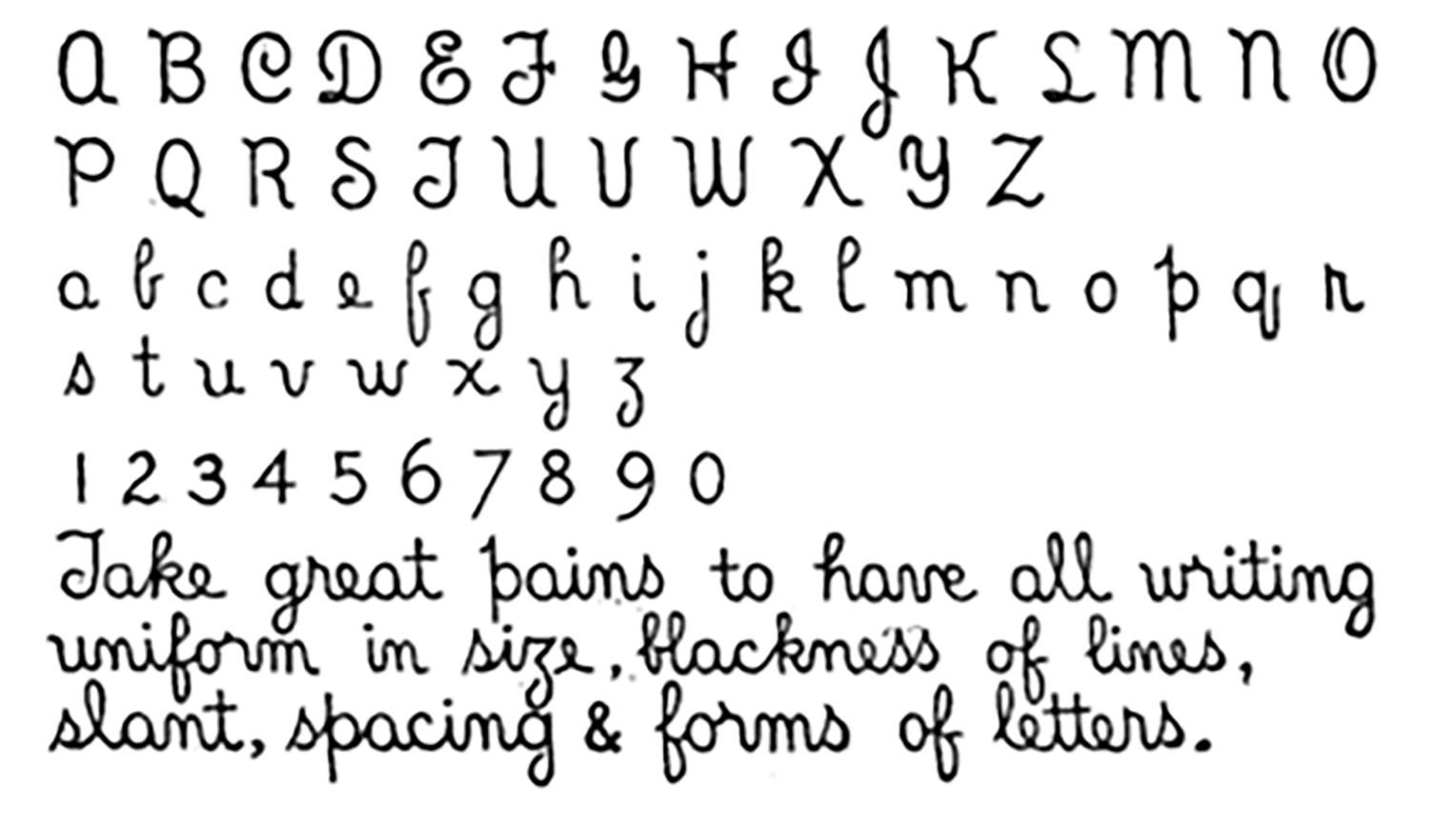 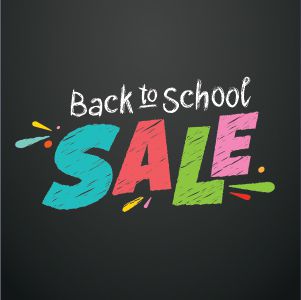 Save 25-50% on these multicultural and inclusive ebooks & audiobooks that help support diversity and equality in your community. 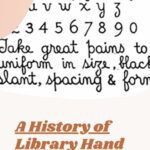 Before HTML/XML, database design and informatics were necessary skills to have or understand to work in libraries, there was a crucial requirement to obtain a job: mastery of library hand. Library hand, a specific style of handwriting, was once a highly-sought and praised manner of lettering and spacing and a requirement for many eager to enter the field.

So what is library hand and what differentiates it from other handwriting? What made it fall out of fashion? Let’s nerd out on handwriting and specifically, the history of library hand.

Library card catalogs, now almost entirely digital databases, once greeted eager readers and researchers in libraries. For most readers now who are familiar with the original catalogs, each card included information about a book’s subject, authorship, and location on the shelves. Memory most likely serves up typewritten cards in a style that was mirrored at the vast majority of libraries one visited.

But before the rise of typewriters, those cards were handwritten, and in order to become the most useful tools they could be for users, library hand became the style in which they were created.

Books were being published abundantly in the late 1800s, and libraries, which had begun to utilize card catalogs, needed a means by which to manage their collections. Information about a book needed to be navigable, as information presented on those cards would need to correspond to the information on shelves and book spines.

In September 1885, Thomas Edison and Melvil Dewey teamed up to design library hand — though their “team work” was less collaboration than it was one of implementation. Library hand, a rounded, easily legible style was based on Edison’s own handwriting that had allowed him to take longhand notes from the wires at a rate of 47 to 54 words per minute. He’d been fascinated with methods of writing since his early years of invention, and Edison developed one of the first methods of writing that separated each letter out individually, rather than connecting them together in script, borne from his work operating telephones and the need to capture information quickly. Edison’s writing also shifted from the right-slanted style of the time into a much more upright one. Years and years of trial and error left a style that helped him write with speed, efficiency, and clarity.

At the 1885 American Library Association (ALA) conference, Dewey and other librarians turned to discussions of uniformity in library handwriting. Those in attendance at the meetings desired a style that would be usable for the average person, without too many flourishes, and was as near to type as possible. The discussion included where and how to use typewriters for catalog copy, and then it turned to Edison and his perfection of a style of writing for telephone operators. Intrigued by the method and its ability to capture information with speed and clarity, Dewey sought to experiment with the writing style to see if it’d fit the needs of libraries.

Dewey reached out to Edison, inquiring about his writing method. He didn’t receive a personal response, but rather, a response from Edison’s secretary, who wrote, “Mr. Edison used this method when he was a telegraph operator taking Associated Press Reports, and he claims that he could write more rapidly and with less fatigue than by any other means. You will notice every letter is written separately.”

Over the next couple of years, Dewey worked to find the perfect writing. It was indeed primarily based on Edison’s work, but as researcher David Kaminski has pointed out in an incredibly in-depth look at the hand’s origins and connection to writing styles more broadly, there are differences in some of the individual letters between Edison’s style and what ultimately became library hand.

March 1887 marked the birth of an official “library hand” in the journal Library Notes. Dewey explained of the decision, “At once all see that where the highest legibility is more important than all else together, we must prohibit peremptorily everything in the nature of ornament or flourish. The simpler and fewer the lines the better, as long as the distinctness of the letter is not impaired.” He and teams of librarians had worked to perfect the style which would marry clarity with speed, though unlike Edison’s need for a speed-friendly style, library hand did not need to put that aspect in as much focus. They began by looking at various card catalog entries and determining what did and did not work based on those criteria, even making decisions down to the lines on numbers. Like Edison’s writing, they preferred a vertical look with little slant, though permission was given for a slight left slant.

Dewey’s prescribed writing differs from the style Edison developed. In Edison’s style, none of the letters were joined, whereas in Dewey’s library hand, some of the letters maintained a cursive style.

But that wasn’t the final take on library hand. A few months later, Dewey updated the style and issued updates to his original article. A look at the way the writing implemented no cursive style can be seen in the revised article. According to the New York State Library Handbook (linked below), both the joined and disjoined styles had specific purpose.

“Extended experiments indicate that the ideal hand for cataloguing is the disjoined, which is used in the New York state library. Most students in the library school acquire it more quickly than the connected form and after practice can write it almost as fast, while the result being much more like print is more legible. It is often called the printing hand, in fact we found after 10 years use of our manuscript forms that several faces of type are now made which are almost exactly what we have been trying to make with the pen. For shelflist, accession. books and other official records, however, the joined hand is often used because most clerks can write it more rapidly. One should be able to write both,” the handbook instructs.

Library Hand As A Skill Set

Once the decisions were made about what would constitute library hand, schools began to include it in curriculum, ensuring new and forthcoming librarians would be up to speed on the latest technology. It took time to implement, so in Dewey’s 1887 article, he encouraged an array of methods for which future librarians could prepare. He encouraged studying the lettering and practicing it, as well as visiting libraries as possible to see how the process of writing worked through the entire facility’s ecosystem. Beyond preparing for learning the new writing skills, Dewey encouraged those who had the time to devote energy to studying German, French, and Latin.

It’s through the Handbook of New York State Library School where students are able to see the ins and outs of library hand education.

“In spite of all inventions, handwriting will continue to be important, even in libraries where typewriters or printed cards are largely used,” reads the section in the handbook on library hand.

Among other elements of library hand spelled out include:

The Handbook goes on to specify the writing implements necessary to achieve library hand success, legibility, speed, and uniformity:

As if those weren’t fussy enough, the handbook also includes best practices for how a practitioner is to write. They should consider the following:

Library hand was, in many institutions, a requirement for the job and an expected part of one’s educational background and honed during institutional training.

It’s not a surprise as typewriters and word processors became more ubiquitous that the need for library hand decreased. Where Dewey had suggested at the initial meeting about writing that type would be suitable, it became clear that the uniformity provided by these tools was necessary for libraries to evolve alongside its users.

Dewey’s legacy has always been in question, and he’s never been the only individual involved in the standardization of U.S. libraries. John Cotton Dana, for example, developed his own library handbook in the 1920s, which, while emphasizing library hand as a unique skillset, offers far more flexibility with its use. In 1922, Dorcas Fellows updated cataloging standards, and while Fellows praised the work Dewey did to start, noted that the goal in writing copy for libraries should be legibility, over standardization.

Likewise, what happens in the library classroom and what happens in the field have always been two different beasts. Where leaders like Dewey weren’t necessarily on the library floor balancing a myriad of tasks, they had far more time to think about and perfect the intricacies of the field. Those on the floor didn’t have time to be fussy with how they should be seated at their desks with their arms at a perfect angle in order to write on catalog card.

Chances are in older libraries, particularly academic institutions that preserve their library catalogs either for nostalgic purposes or because they contain information not easily included in the online component — think rarer materials, like those noted in the Newberry Library — you may stumble upon library hand. If you peruse stacks, especially at research institutions and even in some public libraries, you’ll see evidence of the practice on book spines (a local library to me not too long ago just finished up a project of converting their handwritten spine labels to typed ones!). It’s not an entirely bygone skill, as some libraries still find it to be useful, but those institutions are indeed rare.

David Kaminski posits that indeed, there’s been a decline in library hand over the last half century, but more than thinking of it as something that’s disappeared, it’s instead evolved to meet the needs of today’s libraries.

And for those reading this wanting to try out library hand for themselves? You can always reference the Handbook or seek out the Dana Library Hand font for a more contemporary version.