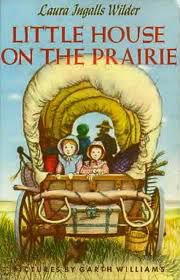 I’ve been on a recent kick where I’ve been rereading books I loved growing up. Thus far, it’s been a really insightful and rewarding book journey (A Wrinkle in Time COMPLETELY holds up! As does A Tree Grows in Brooklyn!) One of my favorite rereads thus far has been the first few books of The Little House on the Prairie series. I loved these books as a kid. I love them growing up. But HOLY LORD is it a different experience reading these books at 7 and 27.

Below, some thoughts on the reread.

The Prose is SO Good

I remember these novels being easy to read as a kid (they have to be for every American girl under the age of 10 to be able to plow through them), but I guess in my head, over the years, “easy” became synonymous with “appropriate for children, simplistic and dull for adults.” I was so wrong, my head completely messed this one up, I’m so sorry Ghost of Laura Ingalls Wilder! These books work just as well for All-Growed-Up Me Reader as they did for Knee-High Me Reader. The episodic nature of the books, as individual tomes and a series as a whole, feels like old-fashioned adventure-time cliffhanger radio, or like cable television without the gross sex. And the sentences! The descriptions are so elegant, the dialogue crackles with period-speak, the revelations of our tiny protagonist are poignant and profound.

It’s widely rumored that Laura Ingalls Wilder’s newspaper woman daughter Rose Wilder Lane had a HEAVY hand in writing these books (as in, it’s possible she basically wrote the books based off her mother’s childhood experiences). To which I say, teamwork makes the dream work.

Everyone Pity the Ingalls, For They Have No Friends

In Little House in the Big Woods, the Ingalls live in a log cabin in the middle of nowhere and sometimes see their extended family on Christmas. Most of the year they just see bobcats.

My point is, of course, that the Ingalls were isolated like whoa-crazy. Like Swiss Family Robinson isolated. Like Lord of the Flies isolated. Which, for whatever reason, I didn’t get as a kid. I just thought “Oh, they’re in the Big Woods! And now they’re on the prairie! And now they’re in a blizzard!” It’s only now as an adult that I can appreciate what a lonely and claustrophobic experience it must have been to be an Ingalls. If I had to spend all that time with my family… I would not have made it past the Big Woods, and I certainly would NOT have made it to Plum Creek.

Rereading the first few books, I find it strange that these books are typically considered “girl books.” Not that I believe in gendering books, because I DON’T. But that’s the rep this series has. However, this book has all the adventure and danger that traditionally-gendered “boy books” has, it has it in SPADES! There’s so much disease and pestilence and blizzards and twisters and carnivorous wild animals and Native Americans- isn’t that the stuff that traditional “boy books” are made of? Really, was the only thing stopping these books for being for X and Y chromosomes alike its young female protagonist? Anyway, now we’ve established via Hunger Games that boys can read books with female protagonists, can we chuck Little House at these adolescent boys’ younger brothers?

Pa Ingalls is a F—ing Psychopath

Best for last. My biggest revelation rereading these books is that Pa should have been institutionalized. Pa and Renfield from Dracula belong in the same 19th century padded cell, TRUE STORY. Pa is CONSTANTLY putting his wife and young children and family dog in danger and it never appears to be for any good reason like “The Ingalls needed more money so they could live.” It’s always “Pa was bored so the family went on an adventure where everyone almost died four times each and Pa still wouldn’t let the family live in civilization.” He’s such a bad dad. Dads weren’t all this bad in the 19th century were they? I’m really glad that his terrible parenting led to the Little House books but I still feel so bad for Laura, Mary, and Baby Carrie. And Jack the Dog. But not Ma. Ma enabled so hard, she gets second place in the Worst Parents Competition.

Anyone else reread the Little House books as an adult? What was your takeaway?