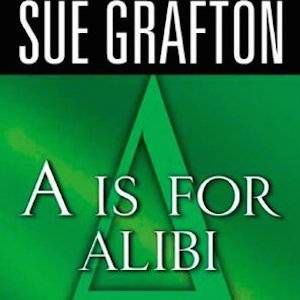 This is a guest post by Sarah McCarry. Sarah McCarry (www.therejectionist.com) is the author of the novels All Our Pretty Songs and Dirty Wings (July 2014) and the editor and publisher of Guillotine, a chapbook series dedicated to revolutionary nonfiction. Follow her on Twitter @therejectionist.

A is for Alibi, the first book in Sue Grafton’s multimillion-copy bestselling alphabet mystery series featuring private eye Kinsey Millhone, was published in 1982. At the time, a female PI was a radical choice for a protagonist, but readers welcomed her with open arms; 32 years and 23 letters later, Kinsey is still going strong. Like her most legendary predecessors—Philip Marlowe perhaps most obvious among them—Kinsey is a wisecracking lone wolf: orphaned as a child, twice-divorced, meticulous, disinterested in commitment, and disinclined to the domestic. She sups on quarter-pounders with cheese and hardboiled-egg sandwiches eaten off paper towels and has owned a single dress for the entirety of the series. She’s self-sufficient, coolly competent, has sex when she feels like it, delights in living alone.

What’s most notable about Kinsey is not so much her solitude as her total contentment in it: “I love being single,” she quips. “It’s almost like being rich.” I’ve read the books in vacation-binge batches over the last twenty years, delighting every time in Kinsey’s mordant wit and unchanging commitment to fast food, solitude, and getting the job done. I turned out rather less disciplined and rather a lot more inclined to hedonism than Grafton’s straightlaced heroine, but she remains for me a character so indelible she seems almost a real person—someone I met long ago who had a tremendous influence on me, and who I’ve thought of fondly ever since.

I inherited my love of mysteries from my grandmother, along with my obstreperous nature and my profound dislike of authority, a quality that is not shared by anyone else in my family. She grew up in France, the less-loved and less-pretty elder of two daughters. Her house was occupied by Nazi soldiers during the war, and as a child I teethed on stories of my grandmother’s derring-do: slapping Nazi officers across the face (and subsequently having to be spirited away by her terrified father before she was killed in retaliation); hiding their rifles and hurling their grenades into the river; listening to the BBC on an illicit radio; et cetera. My grandfather was one of the American soldiers who landed on the Normandy beaches on D-Day; they met when he liberated her village.

I didn’t know any of the bad parts of the story until I was an adult. In truth, my grandmother was a full-time nurse with little interest in being a parent—an unfortunate quality in a woman who had nine children—and my grandfather was a full-time alcoholic. She was a bad parent, and he was worse. She never exchanged her green card for American citizenship, although she lived in the United States for over sixty years, and she spent as much time in France as she could. One foot out the door, yearning for home; yearning, not very subtly, to be on her own. All the parts of myself I liked best I assumed I’d inherited from her; later, I realized that the worst pieces of myself—my selfishness, my tactlessness, my frequent disinterest in the needs of people who care about me—I likely owe her as well.

My own relationship with her was uncomplicated. Every year at Christmas she sent me pink cat stationery long after I was interested in it and monogrammed datebooks long before I had any use for them, and whenever my parents and I visited her she let me pick from the piles of battered mass-market mystery novels that sprouted everywhere in her house—always by women, and often featuring plucky lady sleuths: Miss Marple, Cordelia Gray, Amelia Peabody, Vicky Bliss, and, of course, Kinsey. I don’t think it was an accident that my grandmother’s literary passions ran to feisty, solitary women, unencumbered by the burdens of family and parenting, and I don’t think it was an accident that she passed them on to me. By giving me Kinsey, my grandmother gave me a model for the kind of life I knew I wanted as soon as I read about it, the kind of life I’ve ended up living. I never had a real conversation with her about anything serious—she wasn’t one for feelings, and neither, to be honest, am I—and she died before it occurred to me to try. If my grandmother were still around, I’d tell her at least how happy I am on my own—in Kinsey’s words, “I like my life as it is.” I wonder who my grandmother would have been if she’d had the chance to do the same.