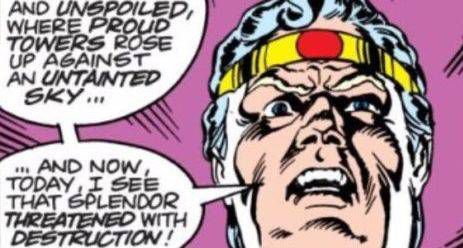 This is a guest post from Asher Guthertz. Asher studies film at UC Santa Cruz, but mostly he reads comic books and wishes he was a superhero.

On the surface, “For the Man Who Has Everything,” Alan Moore’s classic Superman story, claims to depict Superman’s deepest fantasy. The man who has everything, it turns out, wants nothing special. In the story, an alien flower sent by the villain Mongul traps Superman within an imaginary world of his heart’s desire. Kal-El finds himself on a Krypton that never exploded. Here, he is a normal Kryptonian: an overworked geologist who can’t wait to get home to his wife and kids. In the last panel of the first page, Kal-El sports a blue jumpsuit and fashionable Kryptonian visors. His children and wife hug and kiss him. The panel text states: “His weariness lifts. The man has his family about him. He is content.” If this comic book ended after its first page, Superman’s fantasy would read: domestic bliss and an end to the burden of superheroism. But as Moore pushes further into Superman’s fantasy, the narrative becomes complicated, especially as Superman’s father is brought into the picture. 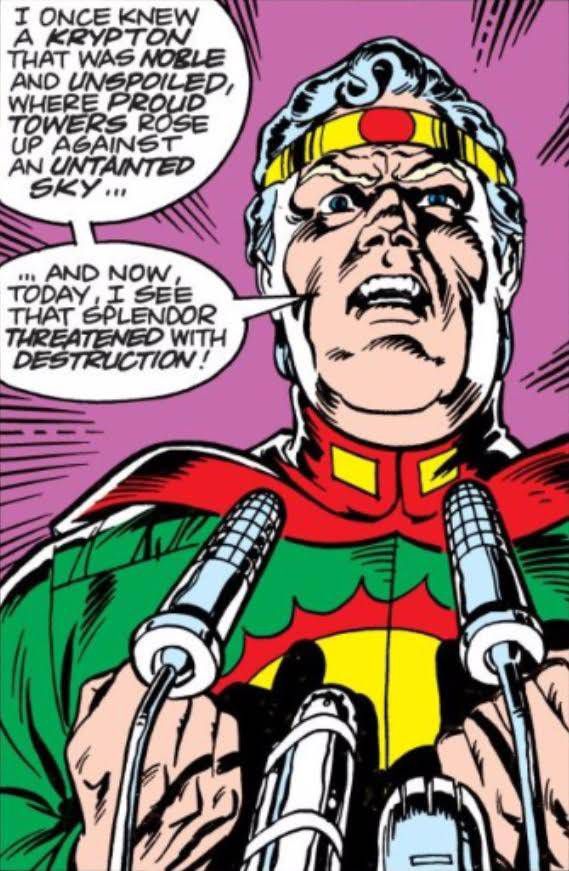 Superman’s father, Jor-El, is a hero of the DC universe. He warns a world that will not listen of its coming destruction, he sacrifices himself to save his son, he provides a beacon for Superman to become a hero of a new world. In “For the Man Who Has Everything,” Jor-El is wrong about Krypton’s destruction. Forced to live in a world that does not allow him to be right, he reveals himself to be a delusional and megalomaniacal racist. The parallels between Jor-El and our current president, or any other right wing nationalist who feeds on fear and hate, are not hard to spot. Jor-El’s new political organisation, “Old Krypton,” decries that Krypton was once great and has fallen from drug trafficking and “racial trouble with the Vathlo island immigrants.” He surrounds himself with radical extremists who wear hooded cloaks and call themselves the “Swords of Rao.” Towards the end of the issue, Kal-El finds himself at Jor-El’s political rally. Jor-El, surrounded by armed guards, screams at a mass of followers. Scowling and shaking his fists, he shouts: “I once knew a Krypton that was noble and unspoiled, where proud towers rose up against an untainted sky…And now, today, I see that splendor threatened with destruction.” Jor-El’s language is intensely familiar in our political climate. He evokes an imagined past utopia and feeds on people’s fears. As he talks about a world “unspoiled” and “untainted,” holding his anti-immigration stance in mind, it is hard not to hear the racism just below the surface.

“For The Man Who Has Everything” is the only Superman story I’ve ever read where Jor-El is not a sainted martyr. The line between hero and demagogue is so thin, this story suggests, that for Jor-El to become a monster, he just has to be wrong. Early in the comic, Kal-El visits his father in his “glass forest terrace.” As opposed to the rest of the issue, the glass trees are drawn in black and white. “Sometimes, I think you wish you were right,” Kal-El tells his father. “I think you wish Krypton had exploded after all.” Jor-El smashes a glass tree, and the next panel, a wide shot of the terrace, shows Jor-El’s small green jumpsuit against the colorless glass shrubbery. Jor-El is a man who can’t stand to be wrong, and it has sapped him of any perspective, leaving him angry and violent in a world that he can only see in black and white. If all it takes to make a villain of this hero is a false prediction, what kind of hero is he in the first place? Maybe Jor-El has never been a saint, only an arrogant man who happened to be right when he predicted catastrophe.

Ostensibly, this vision of Jor-El lives within Superman’s fantasy. When Batman is attacked by the same flower, he falls into his own fantasy: his parents are alive, he is married, he has never become the Batman. Superman, though, does not believe he experienced his heart’s desire. When the alien villain tells Superman he was trapped in his happy fantasy, he shouts: “HAPPY?” in disbelief. At the end of the comic, Wonder Woman gives him a present he already has, so Superman flies at super speed to his trophy room to hide the original. He tells Wonder Woman she got him what he always wanted, but he is lying. These moments show Superman’s uncertainty about his own desires. Unlike Batman, Superman cannot fantasise a world in which his relationship to his father is uncomplicated. Jor-El means so much to Superman; Jor-El and Lara literally hold up the planet Krypton in the statue Superman keeps of them. Superman cannot detach himself from his anchor to his home planet and his reminder to do good on Earth, but inside of his own brain, he seems to know what horrors his father is capable of of, what villainy he teeters on the edge of. Superman’s fantasy is unstable at least in part because he must love and worship Jor-El. America is a place of worshipping and loving white men who have committed and commit monstrous and villainous acts. Like Superman, America depends on unstable fantasies, and I think that “For the Man Who Has Everything” ultimately reminds us of the danger of fantasy, whether it’s the fantasy of prophetic visionary men, old Krypton or making America great again.