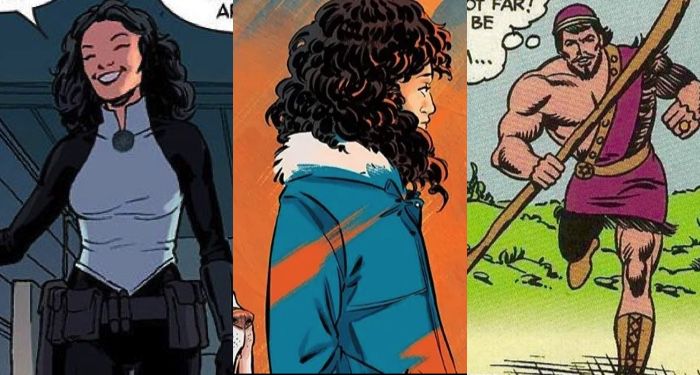 Comic book fans are about to get a great new hero: Whistle, a young girl named Willow Zimmerman who is out to protect her neighborhood in Gotham City. And she’s Jewish. On September 7, DC Comics released Whistle: A New Gotham City Hero by E. Lockhart, illustrated by Manuel Preitano, color by Gabby Metzler and letters by Troy Peteri. Whistle is going to be the first DC Jewish superhero launched in 40 years.

That got me particularly intrigued. Jewish superheroes? Tell me more. I had known about the Jewish origins of the U.S. comic book history thanks to Michael Chabon’s The Amazing Adventures of Kavalier & Clay, but the concept of Jewish superheroes hadn’t crossed my mind. Or how Jewish culture and values may have been intertwined in some of the most foundational characters in the superhero world without being officially Jewish.

So in honor of Whistle’s momentous release this month, this is a brief look at the world of Jewish superheroes. I had a chance to talk to E. Lockhart of Whistle as well as author and pop culture critic Roy Schwartz and Rabbi Simcha Weinstein of the Pratt Institute.

A History of Jewish Creators

For some, it may come as a surprise to find out how much of the superhero world in its inception was Jewish. Many of the biggest names in superheroes were Jewish but changed their names to more Americanized versions: Stanley Martin Lieber became Stan Lee; Jacob Kurtzberg became Jack Kirby. Schwartz says that superheroes were a Jewish creation and Jewish folks dominated the profession from the 1930s until the 1980s.

But why were there so many Jewish people in the comic book industry? Schwartz, author of  Is Superman Circumcised?: The Complete Jewish History of the World’s Greatest Hero, explains,  “On the eve of World War Two, Jews weren’t as persecuted in the United States as they were in Europe. But they were still ostracized, they were still marginalized in respectable creative industries, whether it’s ad agencies, political cartooning, newspapers or magazines. There was an unspoken and sometimes spoken unwritten rule that ‘Jews need not apply.’ So Jews effectively created ex nihilo (out of nothing). The pulp magazine industry, in particular  the comic book industry, was the lowest rung on the ladder of publishing.” For instance, Will Eisner wanted to be a set designer but the doors were closed to him.

Schwartz sees the creation of the superhero as “a reaction formation…a Jewish gut reaction to what was going on in the world, particularly the persecution of their fellow Jews in America and overseas.” Or in other words, Schwartz sums it up: “People with real power don’t need to imagine superpowers.”

That Jewish experience comes out in the genre itself. Rabbi Simcha, writer of Up, Up, and Oy Vey: How Jewish History, Culture, and Values Shaped The Comic Book Superhero, points out that while it may not have been a conscious act, “it’s no coincidence that many of the creators lived double lives, many of them changed names and had…one identity at home [and] another identity at work,” he noted. “And they created characters that also have these global identities, these sorta clandestine experiences. I think it also represented that desire to to assimilate and to be accepted.”

Rabbi Simcha continues, “The fantasy was so beautiful that mainstream America adopted the fantasy as the reality. I think they were just longing for acceptance.”

While there are some superheroes who are canonically Jewish, Rabbi Simcha and Schwartz see the creators’ Jewish background in the creations themselves. Schwartz wrote about the deep Jewish themes and history within Superman. “Superman is the first and the most famous superhero. He is the archetype. He’s the mold from which all other superheroes are cast,” Schwartz says, and “he is also the richest in Jewish signification.”

While Schwartz is not the first to talk about Jewish aspects of Superman, his book doesn’t just focus on his origins, he explores how the values and themes continue through the present day. Rabbi Simcha and other writers point to the significance of Superman’s name Kal-El which “sounds an awful lot like the Hebrew for “voice of God”, Jeff Fleischer writes in an article about Rabbi Simcha’s book. Not to mention the parallels between the origin stories of Moses and Superman.

While there are superheroes who reflect their creators’ Jewish origins, there are characters who are designated Jewish from their creation. In the Marvel Universe, you have some overtly Jewish characters like Sabra (Ruth Bat-Seraph) who was born in Jerusalem and works on a Kibbutz. She would work with Mossad, the Israeli Intelligence Agency, and eventually team up with the X-Men. Her outfit reflects the Israeli flag with its blue and white and Star of David. There’s also ShadowCat (Kitty Pryde) who debuted in the 1980s in Uncanny X-Men, is a student at Charles Xavier’s School for Gifted Youngsters, and wears a Star of David.

And of course there is Scarlet Witch. In the comic books, she and her brother are Romani and Jewish. Her parents (sometimes Magneto) meet in a Holocaust concentration camp so there’s that history ingrained in the character. As many other culture critics have noted, this history is long lost in the movies.

E. Lockhart notes that there’s Seraph (Chaim Levon) who is a school teacher and is also born in Israel, created in 1977. He derives his powers from artifacts from the Bible like the Ring of Solomon. Before that, there’s Ragman (Rory Regan) who is basically the superhero version of the Golem.

But there’s also a history of “retrofitting” superheroes as Jewish. The one that comes to my mind first is Batwoman (Kate Kane) who was first created in the 1950s but she came out as Jewish and Queer in 2005. I met her for the first time in DC Bombshells. There’s also the Green Lantern (Hal Jordan), who we learned in 2015 had a Jewish mother, Catholic father, and practiced as a child.

Then there’s Harley Quinn. Schwartz aptly sums it up: she’s a “villain turned antihero turned sometimes hero.” But her Jewish origins are notable. Making her debut in Batman the Animated series, Arleen Sorkin, a Jewish comedian, was the first to voice her; Schwartz notes, “she brought and imbued borscht belt humor” into the character. Over the years, she’s revealed her Jewish origins — in 2016, she reveals her mother is Catholic, father Jewish, but recently in the animated series, she says her mother is Jewish. Regardless of the exact religion of her parents, it’s hard to dissociate the Brooklyn Jewish vocal mannerism with Harley Quinn.

And like Harley Quinn, you’ve got Magneto who is a sometimes villain, sometimes superhero whose origin story begins in a Holocaust concentration camp.

Note that this is by no means a complete list of all Jewish superheroes.

So where do Jewish superheroes stand in the present day? E. Lockhart notes that Whistle (Willow Zimmerman) is the first Jewish superhero originating out of DC since Seraph in 1977. Batwoman and Green Lantern were later retrofitted. It’s fun to see all the Jewish influences in Willow’s life — her love of Jewish food, a mother who teaches Holocaust studies, and even her moral quandaries feature around Jewish ideas like tikkun olam, which has become associated with doing good in the world.

Rabbi Simcha notes about Whistle: “I like the fact that she created this sort of almost Lower East Side version of Gotham, which is kind of full circle. Gotham itself was really based on the Lower East Side. I think it was Bill Finger that got the name Gotham from Gotham Jewelers out of the phonebook. A Jewish jewelry store.” He sees the comic as a “a nod to the past, but it felt very in and of the present.”

Jewish Superheroes Now and Beyond

As for Jewish superheroes overall, Rabbi Simcha appreciates “a knowing wink and a nod to the characters’ Semitic roots.”

One thing that Schwartz points out is that while comics have become more diverse, he’s seeing characters become whitewashed from their Jewish origins. Scarlett Witch is an excellent example of that. It seems to be particularly notable in the move to television and/or movies. Schwartz cites Legion, who is Israeli in the comics but not in the TV show. Shadowcat (Kitty Pryde) wears a Star of David in the books but that part of Kitty Pryde’s background doesn’t seem to appear in the movies.

It’ll be interesting to see how Jewish superheroes and superhero comics in the future may try to tackle these issues. I can’t wait for more Whistle and her adventures.

Want more? Check out this article about the new comic Whistle.