If you’ve been keeping up with the bookish internet recently, you’ve heard the news that J.K. Rowling has announced that she made a mistake having Ron and Hermione end up together. 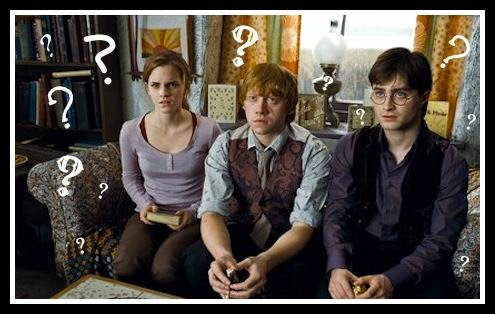 First of all: I disagree. One of my favorite things about the Harry Potter series is the fact that it’s not the hero who gets the girl. I also personally find Ron and Hermione to be magnificent together, and I think that my own bushy brown hair and piles of books give me some authority here.

When would this Hermione and Harry relationship have happened? Would Harry have been the one mutilating tiny figurines of Viktor Krum during the Triwizard Tournament, or would the H/H train have reached the station during those lonely nights in the Deathly Hallows tent of despair? Would it have been a betrayal of Ron, or would Ron’s feelings for his bushy-haired buddy have been written out of the story completely?

If Rowling was going to question any of the major characters’ pairings, she’d have been better off reconsidering Harry’s relationship to Mary Sue–whoops, I mean Ginny.

HOWEVER. None of this is my point.

When the book ended, all of the main characters were under age 20. Sure, they’d been through a lot, but they were still teenagers. It was entirely possible that they’d go forth in life and have a dozen more lovers, become Pygmy Puff hoarders and die alone, or move to other countries and marry people who were never in the books. It was possible, except that Rowling decided to put the stamp of forever and ever on everyone’s high school boyfriend by adding the epilogue.

I still remember when I turned that final page and saw for the first time that Rowling had added an epilogue to Harry’s last book. It didn’t take more than few sentences for me to develop a sinking feeling in my stomach. What?, I thought, 7 books of plot twists and suddenly everyone marries their high school boyfriend and has adorable moppets who become friends with their high school friends’ similarly aged moppets!??! Even Draco Malfoy is there?

Ron and Hermione started dating shortly before their high school graduation. Without the intrusion of the epilogue, I can imagine that Ronmione went on to have as many red-haired moppets as I wish. Or I can imagine a career-focused Hermione reforming the entire Ministry of Magic from the inside out as Ron developed an unhealthy interest in goats and took over management of The Hog’s Head. The possibilities are endless.

Or rather, the possibilities should be endless. The epilogue shuts all that down. It seals all of the young characters into the relationships they would have chosen for themselves as teenagers and discounts the possibility that some of the awful things that they all went through in that final book could have changed them enough to make them turn outward.

It also feels like cheating. If you want to decide what happens to your characters, Rowling, you have to actually write it. It’s no fair summarizing all that time in the middle. You have to make it happen.

I have a friend who once suggested to me (yes, this is something I debate with my friends. Yes, my friends are amazing.) that Rowling wrote the epilogue as a defense against pressure to continue the series or as a way of capping the story so that she wouldn’t be tempted to continue it herself once it was done. This is my favorite explanation, by which I mean it’s the only one that makes any sense to me. But if it is the reason, it was a selfish decision and she should have resisted. The story deserved better.

I still love the Harry Potter books and I always will. I’ve read them more times than I can count and I’ll read them again. But the epilogue was unnecessary, self-indulgent, and cheesy.

Normally this is where I would conclude by asking you if you agree with me, but I won’t be changing my mind on this one.

Author’s note: If by some miracle the person reading this is J.K. Rowling, please know that I still think you’re amazing!

Photos via and via (emphasis my own).