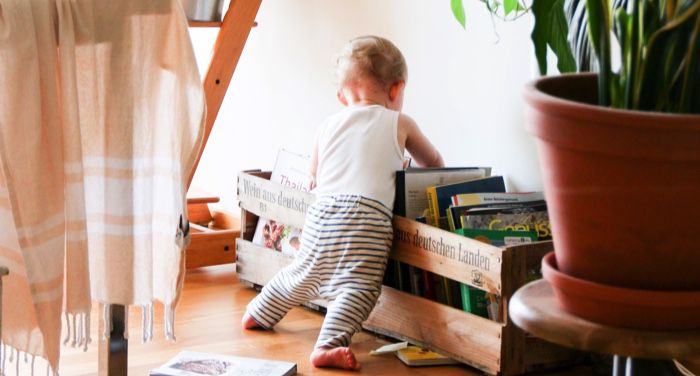 I have loved The Baby-Sitters Club for close to three decades now. It is the series that defined my childhood, taught me about America, and became somewhat of a mild obsession as I became an adult (if you look at my author page on Book Riot and see just how much I’ve written about the BSC you can tell how mild of an obsession it is). When I had my first child three years ago, one of the things I looked forward to the most was reading with her and sharing with her books I loved as a kid.

The Baby-Sitters Club is targeted at an audience older than 3, but I’ve managed to introduce her to Stoneybrook and some of the characters of the BSC through the Little Sister graphic novels. It’s a brilliant idea, if I do say so myself. My 3-year-old primarily reads picture books, usually the ones targeted at younger audiences, but there have also been some early readers that she loves (Scaredy Monster and Kitty and Dragon come to mind). Since those have chapter structures and more words than a typical picture book, I thought that the Little Sister graphic novels might work.

The Little Sister series was always targeted at a younger audience than the main BSC series, and focused on Karen, Kristy’s little step-sister. I have some of those saved for my daughter for when she’s older, but she’s still a bit young for the amount of words on the page. And so, the graphic novel versions of these books came to the rescue!

Karen’s Witch was the first title to be released as a graphic novel, back in 2019. We read that one, and it was fine. It’s our first introduction to Stoneybrook, the Brewer family, and the neighbourhood in which they live. And of course, Morbidda Destiny, the witch who lives next door to Karen. My toddler sat with me and we read the whole book over a few reading sessions, and she enjoyed it enough. We’ve read it a few times since the first reading.

The second one, though — that was where I could see myself in my daughter. The second Little Sister graphic novel was Karen’s Roller Skates, and my daughter loved it. We read the whole thing in one sitting, which is pretty impressive considering she’s only 3 and her other favourite books are picture books like The Day the Crayons Quit, Superworm, and The Cook and the King. And then it has become like her other favourites — that is to say, a book that we read over and over again. Sometimes we read the whole book in one sitting, but more commonly we read a few chapters at a time (not only are these books her first experience of ‘grown-up’ books and proper chapters, these books have also let her have her first legitimate uses of bookmarks). This is a book that she talks about when we’re not reading it, and she draws connections between this and other books we read.

I’m not sure how much of the BSC my daughter is really understanding. The BSC isn’t actually mentioned in these first two books, although Kristy is introduced as a character. I do know that she at least recognises Karen Brewer as a character, so there’s that. We just read the third one, Karen’s Worst Day, and this is the first time the BSC gets a passing mention. It’s hardly a detailed description of the club, and I’m not expecting my toddler to really know what the BSC is or even remember it from this one mention, but hey, planting seeds.

Truth be told, I never liked the Little Sister books that much, and definitely nowhere near as much as I love the BSC. I was older than their target audience when they first came out, and honestly I thought Karen Brewer was a bit annoying. As far as the kids of Stoneybrook go, there were other children and younger siblings I liked more. So I wasn’t sure how I would feel about the Little Sister books being adapted into graphic novels. I liked that there was a new format of something BSC-related, but I wasn’t sure if I would genuinely like the novels. Well, now I know: I think they’re great adaptations; I still think Karen is annoying; and I love them because they’re providing a bridge between my daughter and the most influential book series of my childhood.