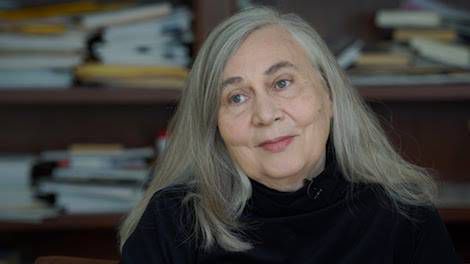 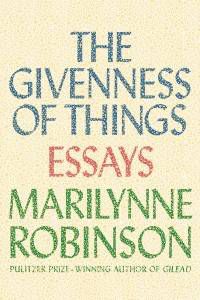 I spoke to one of Book Riot’s perennial favorite authors, Marilynne Robinson, about some of the subjects she touches upon in her new book, The Givenness of Things. In this thoughtful collection of essays Robinson explores such topics as fear, cultural pessimism, gun violence, and the place of the arts alongside science. The collection is thought-provoking, important, and imbued throughout with her characteristic grace and humanity. Robinson was recently listed in Time Magazine’s list of 100 Most Influential People as an Icon, which certainly befits her.

We hear a lot of worried hand-wringing about the state of literature and the state of reading in America. What do you think? At Book Riot we are surrounded constantly by excited readers. In June you will be speaking at the Printers Row Lit Fest in Chicago which will attract over 150,000 book lovers. Are you optimistic about readers and reading in our country today?

Americans are always saying things about Americans—they’re fat or intellectually lazy or materialistic or whatever. One of my regrets in life is that I ever paid attention to any of this. There are more than 300 million of us, after all, and as heterogeneous a population as has ever existed anywhere. I think this should discourage generalization in any case, and especially the kind of generalization that tends to be ungenerous and incurious. We have an enormous outpouring of books every year, and I think I am not cynical in pointing out that this would not be the case if no one bought them. Writers in other countries dream of being published in this country because the readership is potentially so very large. And books written by Americans are held in high regard in every part of the world I know of. I think a case could be made that our contemporary literature is extraordinarily strong, and that this is true in part because it has a vigorous readership. I know that reviews and other attention have been cut in recent years, a predictable attempt to get ahead of the curve of decline. But the phenomenon flourishes none the less.

When you sit down to write, who are you writing for?

I’m trying to be faithful to what I experience as the voice of the novel. I suppose I could say that the novel itself is my first reader.

As a reader, I am thrilled that you continue to return to the town of Gilead, Iowa. What draws you back there? How do you know when a project or piece is done?

I have always been drawn to places that were my own, in the sense that I know them better or otherwise than anyone else does—they allow me to step outside conventional representations of them. I mentioned in the first answer that Americans tend to speak very dismissively of Americans. I know that a town, a household, even a mind, is always ample space for the unfolding of all the great questions. Gilead has been very adequate to my purposes. The work tells me when it is done, often sooner than I would wish.

In your books you write about a Christian faith that is so full of grace and beauty. How do you reconcile this with the version of Christianity that is co-opted by modern politicians as a justification for intolerance and bigotry?

I am filled with—there are words I forbid myself, like contempt and disgust, which I would otherwise find useful here.

I loved your new essay collection The Givenness of Things. In one essay in particular, you write about the role of fear in American politics. Do you think that a sector of Americans are voting for candidates like Donald Trump because they exploit this fear?

Fear is a form of excitement, as the NRA, the horror movie industry and talk radio are well aware. It has been heavily marketed by Fox News. It disheartens me that so many people seem to have taken it on as a hobby or an addiction. There is a loss of personal dignity involved in this. Why do Americans want to cower and fret when they are as safe, except from their own guns, as any mortal population that has ever lived? Yes, mortal. We all face an ultimate peril, like everyone who has ever lived. But the fact is that this country is unimaginably powerful, in part because of its stability.  Divisiveness is in fact dangerous. Encouraging hostility toward our own government or parts of our population, for the fun or the money involved, is deeply irresponsible.

In your recent conversation with President Obama, you said that democracy in the United States used to be viewed as an achievement. I am 24 years old and that puts me in an age bracket with notoriously low voter turnout – do you think this speaks to your worry about us taking democracy for granted? Have we forgotten how much of a privilege it is to participate in a democracy? Is there an antidote to this?

I think we have not educated ourselves very well about the origins of our democracy, over against the other kinds of government that had prevailed time out of mind and are still predominant in much of the world. The two crucial elements of democracy are self respect and mutual respect, and we should do all we can to encourage these in ourselves. It is true that we have fallen grievously short in this regard, and it is also true that when they assert themselves, notably in the Civil Rights movement, they have a grand authority. There is nothing inevitable about democracy. The difficulty of the attempt and the fragility of the result have been demonstrated in many places. Antagonism within populations are the great problem. We should be very serious about discouraging them here. So yes, it is a privilege—and we need to be sure everyone feels it as a privilege. As for the antidote—I am glad Hillary Clinton came through the primaries, and I think we should all be grateful to Senator Sanders for showing how much life and possibility there is in a system we are too ready to see as “rigged.” I borrow his language—I think he is a great refutation of its appropriateness.

Another essay in the new book, “Humanism,” was particularly striking to me. You speak of neuroscience as being in many ways opposed to the humanities. A geologist studying the chemical makeup of rocks doesn’t negate the beauty of the mountains – what is different about scientists studying the brain?

My criticism is not of the study of the brain—I am always in favor of studying anything. It is the extrapolations made from their observations I object to. Those I criticize fall back on the language and the conclusions of antique positivism, on the basis, usually, of heightened blood flow to some region of the brain, which is, considering the complexity of the brain, hardly to be called information.

You speak often about the value of studying history. What do you think of the phenomenon that has been Hamilton? Have you seen it? Are there any under-appreciated historical figures that you wish would be brought to the foreground?

I haven’t seen Hamilton, but I love all that it implies about the vitality of history. There are so many fine and moving souls in history I could never make a meaningful list. It would probably begin in the 14th century.

And speaking of pop culture – do you like Beyonce?