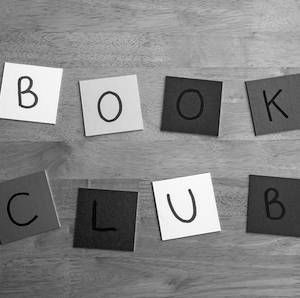 Mark Zuckerberg’s book club immediately raised numerous questions in the literary community. Utterances of “Will he be the next Oprah?” soon stemmed into “Is Mark Zuckerberg a robot?” (At least, I’ve been wondering that). There are some easy critiques to make: Zuckerbot has favored male authors thus far, the posts on the Facebook page appear to be simply copied and pasted, the comments section is a free-for-all, etc., but overall the idea is pretty neat. If nothing else, one has to admire Zuck’s commitment to a randomly crowdsourced new year’s resolution, and he is raising awareness of some great books.

This project got a lot of the Book Riot staff wondering, what other interesting people could run a large-scale book club? We discussed obvious candidates such as Taylor Swift, Stephen King, Janet Mock, Bill Nye and J.K. Rowling, as well as a few more niche personalities. What’s clear is that there are a lot of celebrities we’d love to see run book clubs. Here are a few of our favorites:

Queen Bey is a pretty straightforward choice for a celebrity that could run a kick-ass book club. I’m convinced she’s one of the few people who could release a book by surprise and have it instantly become a bestseller. How many kale sweaters have you bought because you saw her wearing one? Real talk though: Beyoncé would be guaranteed to pick diverse, sophisticated, feminist works and would brush aside any trolls with class and ease. You never know- in an ideal world her book club may even inspire the Roxane Bey collaboration that we’ve all been dreaming of.

If you haven’t watched Ansari’s new standup from Madison Square Garden on Netflix yet, get on that shit. Aziz has 5.4 million Twitter followers and I doubt he’d have a problem spreading the word about a good book. Readers could expect straightforward, humorous commentary, as well as astute criticisms. Assuming this book club takes place online, it’d probably be relatively free of instigators and haters as well, because it’s safe to say that Aziz can out-heckle the best of them.

Gatesnotes pretty much already has all the materials you need to set up a Bill Gates book club. On his blog, he provides articulate, thoughtful reviews for a wide range of books (mostly nonfiction). Though he’s a tech guy, his reviews are personal and lack the terse technical tone you may expect from someone of his background.

I don’t know if there’s anyone I enjoy following on Facebook more than Junot Díaz. He consistently brings world issues to my attention and provides candid, brilliant analysis of each one. On an somewhat unrelated note, I’m generally wary of book blurbs, but when I see a quick stamp of approval from Junot I’m more likely to pick up a book, hands down. Overall, Junot has a big following, Oscar Wao just got named one of the best books of the 21st century (so far), and his book club would be topnotch. Junot would assuredly be a fearless moderator and unabashed when presenting his ideas.

All the Harry Potter stuff aside, Emma Watson is pretty much always killin’ it. A lot of people would surely love to know what she reads, myself included. If I had to take a guess, I think Watson’s taste would be an eclectic mix of brand new nonfiction and obscure novels, with a few classics thrown in to balance it out. Of course, this is mere conjecture for the time being.

Roxane Gay has a pulse on literature today, and is undoubtedly the perfect person to run a public book club. She has a devoted social media following (with whom she often communicates at lightning speed) and she also contributes to numerous awesome literary publications. People say you have the same number of hours in the day as Beyoncé, but sometimes I wonder if her and Roxane have one or two extra.

With more NBA championship titles than any other coach in NBA history, it’s safe to say Jackson knows how to motivate his players. However, if you’re not an avid sports fan you may not realize that Jackson utilizes peculiar coaching techniques that have given him the nickname “Zen Master.” One example is that he gives players books to read before long trips on the road. In fact, Jackson hand-selects different books for each player based on their personality. A book club based on this premise couldn’t be done on a massive scale, but it would be neat to read some of the books he’s given to various players over the years.

Does an R.B.G. book club really even require any explanation? At 82 years of age, she’s still giving everything she has to the job. Ginsburg has come out and said that she will eventually step down when she doesn’t feel at full steam anymore, but whenever that day comes I can only hope that she shotguns a beer and then declares that she’ll be starting the best book club of all time.