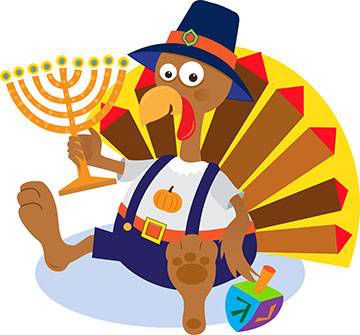 Stephen Colbert once said, “How dare you, Hanukkah! Pretty soon school kids will think Thanksgiving started when the Wampanoags sat down with the Maccabees and the yams lasted for eight nights.”

I hear the man, I really do. I mean, what? WHAT? Hannukah on Thanksgiving?! It hasn’t happened since 1888, apparently, and it won’t happen again until we’ve colonized other planets and have built a wonderful utopian society. But that’s neither here nor there.

I’m here now to help you in your quest to celebrate Thanksgivukkah correctly (that’s what they’re calling it- I didn’t make it up). Food is easy: I’ve found recipes for Manischewitz-brined turkey, latkes with cranberry applesauce, sweet potato latkes, pumpkin kugel, and on and on and on just by googling “Thanksgivukkah.” The real tough one is of course the most important: BOOKS! Where are the Thanksgivukkah books? I haven’t found any yet, so I asked my fellow Rioters for some ideas and we came up with a list of books that SHOULD be written for and about Thanksgivukkah: