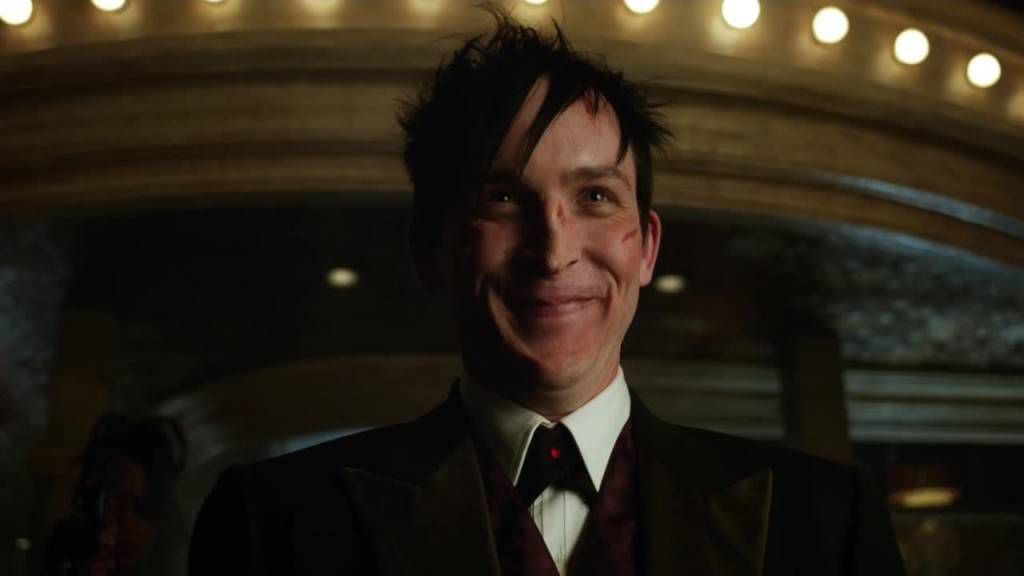 “What the Little Bird Told Him” finds Jim Gordon attempting to regain his position as a Detective on the GCPD by tracking the Electrocutioner, while Fish Mooney finally makes her move to usurp Carmine Falcone and fails epically thanks to Penguin making some moves of his own. A lot happened this week, and as has become the norm around here, I’ll be taking a look at the good, the bad, and the stuff that made me say “Oh, Gotham…”

I think this might be the first time in twelve episodes that I’ve finally started to see a direct link from the Chino Gordon (as I’m ought to call him) in Gotham to the Commissioner Gordon from Batman comics, movies, etc. Gordon isn’t some kind of genius detective, or even a particularly good one necessarily. He’s just a solid, blue collar cop with a good heart who’s not out to prove he’s better than anyone. He just wants to get the job done and get it done right. He’s a really simple kind of hero. That’s why I’ve always liked him.

There’s something very human about Gordon lying to Commissioner Loeb to get his job back, and then busting his hump to make sure that he pulls off what he promised. Gordon being the only cop not electrocuted in the GCPD because he was the only one willing to wear his lame rubber sole galoshes is a perfect character moment. It says everything you need to know about Jim Gordon in one beat. Then, how does Gordon defeat the Electrocutioner? He just throws a cup of water at him and shorts out his electrified equipment. Perfection. The best Gordon we’ve ever seen on this show. Hopefully, it’s just a taste of much more, because this is a guy I want to watch a television series about.

I mentioned my love of the Gordon/Bullock friendship in last week’s recap, but this week gave us a lot more to have fun with. This show is so much better now that they both like and respect each other. I could watch the Jim and Harvey show every week.

This week, Falcone was the good third of a mixed bag storyline that included Fish and Penguin . His helplessness when he is afraid of losing Liza, his rage when he discovers her betrayal, and the sadness as he sacrifices Liza to ascend/succumb to his role as Gotham’s criminal godfather are all played expertly in the episode. Watching Carmine Falcone rid himself of the last of his humanity and truly become a monster is a tragedy, but I can’t wait to see the aftermath.

This week, the Penguin continued to stumble backwards into good luck and pretend it was all part of the plan. Everything about this was annoying. From his first scene where he talks to himself at the restaurant, to the scenes where he whines and cries and swears to Maroni that he isn’t double-crossing him (even though he totally is), to his stupid smug face in yet another hero shot that Gotham insists on framing into almost every episode, I’m ready for him to either win or lose his stupid chess game so we can all move on.

So that whole “weaponized lounge singer” plan that Fish has been going on and on about for half the season? Turns out, she wanted the WLS (Liza) to make Falcone fall in love with her, then Fish would “kidnap” her with the ransom being Falcone agreeing to leave Gotham forever so that Fish could take over. I mean… that’s it? That’s the plan? It’s a pretty unbelievably stupid plan. With all that masterminding, I assumed Fish would have come up with something a little more involved than the “pretend you like him” plan used by high school bullies since the beginning of time. Apparently Fish has never seen Carrie, because this turned out pretty much as well as that did.

Maybe she was hoping for more of a She’s All That situation.

Barbara vs her Parents

Barbara Keane stars in the worst episode of Gilmore Girls ever. There was absolutely no reason for this scene to exist. None whatsoever. An absolute waste of 2 minutes.

Nygma continues his crush on Miss Kringle, the file clerk at the GCPD. This week, he gives her a cupcake with a bullet in it. It’s a riddle. A love riddle. It really freaks her out, but when he explains the riddle (something about beautiful women being deadly, seemed like a bit of stretch to me), she seems to think it’s actually kind of sweet and smiles. But when he gets chased off by some meathead cop, she thanks the cop and tells him that Eddie freaks her out. Wait. Is she smitten or not? What’s with the mixed signals, show?

Come on! Seriously? We’re doing this already? I get that these actors have chemistry or whatever, but Leslie’s only been in one other episode. They just met like two days ago!

What did you think of this week’s episode? Do you think Gordon feel any closer to his comic book counterpart? How did you feel about the progression of the Falcone/Penguin/Fish power trifecta? What are you hoping to see next week? Let us know in the comments below!