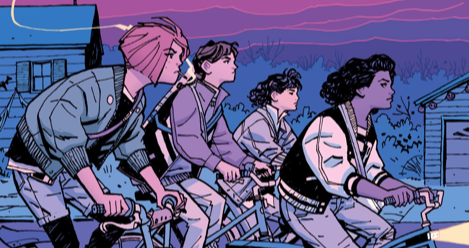 Girl gangs are one of my all-time favorite character configurations. All the emotion and complexity of female friendship, combined with the raw power of women protecting each other and looking awesome. Girl gang comics are especially satisfying because we get to see that killer fashion and all the attitude the characters exude. I like all kinds of stories about women and friendship, but sometimes I need a break from the way society likes to make women’s relationships sentimental or superficial. For me, good girl gang comics dig deep into the fierce heart and glorious diversity of femme. 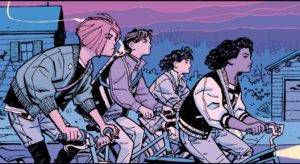 When four of the first female paper boys join up the morning after Halloween to make their deliveries safe from pranking teenagers, things get weird. FAST. Set in suburban Cleveland in 1988, Paper Girls is a gorgeous sci-fi mystery playing out in the pre-dawn hours. The relationship between new girl Erin, local legend Mac, Jewish jock KJ, and nerd Tiffany hits on the organic reality of girl gangs: a common need to be protected. 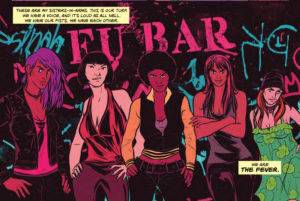 Curb Stomp is about a girl gang in the most traditional sense. Five women make up The Fever, and they’re the combination bodyguards/law-enforcement for one of three boroughs in their city. The gangs running the other two territories are building empires of guns and drugs, while the Fever girls are just trying to keep Old Town—poor and crumbling—from collapse. When a neighboring gang member comes onto Fever turf and breaks the rules by pulling a gun and threatening Betty’s family, she takes him down, hard. It’s an action that triggers a war. Gritty and violent, Curb Stomp doesn’t pull any punches. Particularly great is the way The Fever are portrayed—diverse and real. The art is gorgeous in its honesty, never minimizing the dark brutality of these women’s lives by smoothing them into idyllic beauties. If you want your girl gang comics hardcore, this one’s for you. 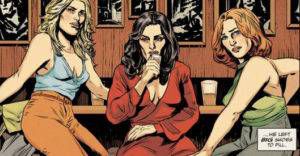 When their drug-dealing, mafia-helping Irish gang leader husbands are carted off to jail, Kath, Raven and Angie face a dilemma. As the battle for their work and territory ensues, the woman have to decide whether they’ll let everything fall apart or step in and take the reigns. Dark and intensely realistic, The Kitchen takes place in Hell’s Kitchen, circa 1979. This book flips the macho game of gangs and crime to put these women at the center. Each wife is refreshingly individual, with differing opinions, approaches, and reactions. This is a girl gang of necessity, for sure, but just as they never magically become best friends, the women don’t fall apart from catty, petty story lines that so often overwhelm narratives about female leaders.

A true joy from the internet, Rock & Riot is the campy, good natured tale of rival gangs in a 1950’s high school. One gang is made up entirely of girls—of all shapes, colors, and orientations. In the second comic, the badass leader of the pack falls hard for a cute girl in the hallway and the whole thing is off to the races. Leather-clad lady-friends, fabulously fifties hair, and queer romance—what more could you POSSIBLY ask for? 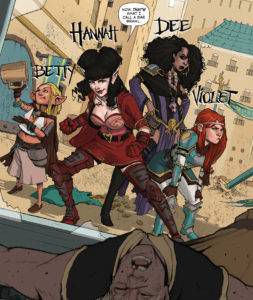 The Rat Queens are a rowdy adventuring party (which is fantasy/RPG talk for ‘gang’) made up of a gruff dwarf, a snarky elf, an atheist cleric, and a hippie halfling. These women combine their abilities to bring down monsters, collect bounties, and gather riches. Through the ups and downs of professional and personal life, the four of them share a dwelling often filled with epic parties and just as epic fights.