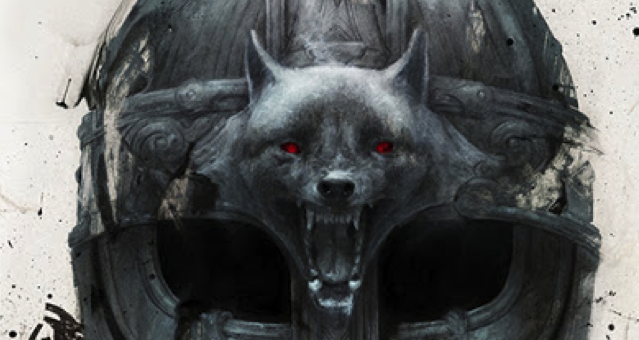 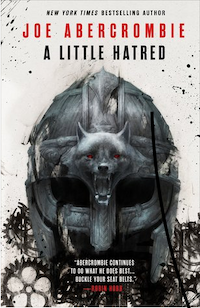 If so, I have good news, because Joe Abercrombie is releasing a new novel, A Little Hatred. It’s the seventh novel in an extended universe in which magic is as real and terrible as any weapon of mass destruction. (The people are even more terrifying than the magic is, but they have better one-liners. As in, there are some bad people in these books, but every single one of them is a comedian.)

A Little Hatred is the beginning of a new trilogy, set twentysomething years after Abercrombie’s first trilogy.

Abercrombie’s world is vast as our own, and with so many books, there are a lot of characters, wars, and political schemes to keep track of. While you can absolutely jump into the First Law universe with A Little Hatred (as you can with any of Abercrombie’s standalone novels), if you’re like me, you might need a road map to help you remember who is who, and what everyone’s motivations are. I had to pull out all of my old Abercrombies and flip through them to remember everything. 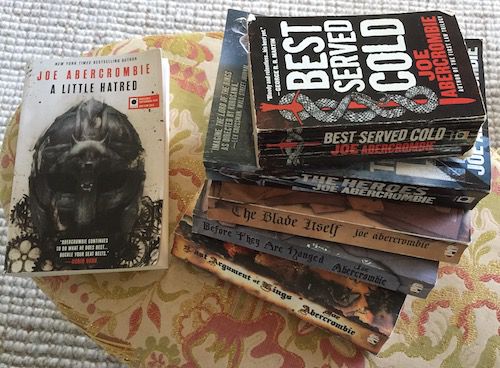 This is how I approached reading A Little Hatred – like a research project.

To keep you from doing the same thing, because this adds like a week and a half of reading time, here is a First Law series reading order with some notes on each book.

(I am not including Sharp Ends, Abercrombie’s short story collection in this. I haven’t read it, and I don’t know if it fits in anywhere in particular.) 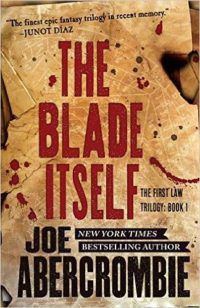 This novel kicks off the series and introduces the characters as they assemble like a D&D campaign gone wrong. There’s Logen, a warrior from the North who goes into berserker rages and is able to speak to spirits.  There’s Jezal dan Luthar, a dashing young fighter with bad habits. Sand dan Glokta was a dashing young fighter, until he was captured during the war in the south and tortured. Now he’s disabled, disfigured and a torturer himself. Ferro Maljinn is a half-demon fleeing her past in the south. And then there are wizards: specifically Bayaz, first of the Magi, an old man who claims to be the legendary wizard who founded the Union, which can’t be right.

Before They Are Hanged

This is the quest book. Glokta has been shipped off to defend Dagoska, a small Union city-state surrounded by the Gurkish empire. It’s not going great. Meanwhile, the Northmen are attacking the Union’s upper borders and the Union’s prince has been dispatched to fight them off…also not going great. Fortunately the Union has a mage, Bayaz, but he’s gone on a holiday, taking Logen, Ferro and Jezal on a journey to find a MacGuffin of great power. Bet you can guess how that’s going.

The Last Argument of Kings

War is everywhere. The North is torn apart by War as Logen’s BFF-turned-enemy Bethod tries to secure an even bigger kingdom for himself. Glokta is fighting a political war in the halls of the Union. The king is on his deathbed, the peasants are revolting, and the nobles are all trying to grab power. There’s also an invasion threat. But did we mention the Union has a wizard? And yay, he’s back in town.

Monza Murcatto is a feared mercenary general in Styria, a group of warring city-states that are essentially the First Law’s version of Renaissance Italy. Or she was, until the grand duke she was winning battles for stabbed her and threw her down a mountain. But someone picked her up out of the trash pile at the heap of the mountain and patched her up, and now she’s out for revenge. Monza is a new character, but you might recognize some of her friends from the trilogy. You’ll certainly see references to people you know scattered throughout.

Hey guess what. The North is at war. It does that. The Union border being tested by the new king of the North, Logen’s old friend Black Dow. Tensions are running high on both sides, and loyalties are being tested. But the action really centers on a ring of stones, called The Heroes, on a hill, and the dozen Northmen who were sent there to guard it. It’s a stupid hill, and it’s not good for anything, but it’s the center of the battle. All of Abercrombie’s books include war (as you can probably tell by now), but this one centers on war. It’s almost all battle. It especially focuses on how several small groups in different parts of a battlefield survive and make an impact on the outcome as a whole.

Out east there’s an old man named Lamb, who is a famous coward with a mysterious past. One day he and his oldest stepdaughter go out to market. When they come home, the two youngest stepchildren have been kidnapped by a group that’s been traveling the countryside, stealing children. So Lamb and his daughter set out to find them. Will you meet people you know from the other books in this one? Yes, you will. Will I tell you who they are? No, I won’t.

As I said, this book takes place 20–30 years after the first trilogy, and how things have changed. Do you remember how the Avatar universe changed between The Last Airbender and The Legend of Korra? Suddenly the medieval setting was gone, and our heroes were in the midst of a steampunky industrial revolution? Well, that’s sort of what happens in A Little Hatred. Machines have been invented and everyone is all Victorian now. Factories are everywhere, unions are trying to form, and the age of magic seems to be fading. Although developments and characters from the other books (especially Best Served Cold and The Heroes) are referenced and make appearances, this book is a direct sequel to the first trilogy, so you will catch up with several main characters from that book, as well as their children. A lot has changed.

Except for one thing: the North is at war.