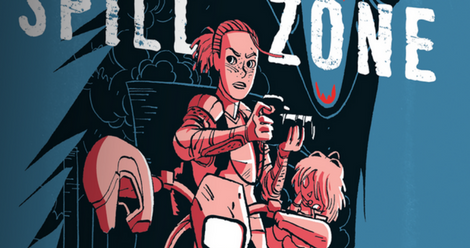 This giveaway is sponsored by Spill Zone, a stunning graphic novel from bestselling author Scott Westerfeld. 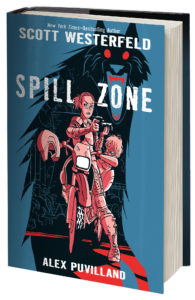 Three years ago an event destroyed the small city of Poughkeepsie, forever changing reality within its borders. Uncanny manifestations and lethal dangers now await anyone who enters the Spill Zone. The Spill claimed Addison’s parents and scarred her little sister, Lexa, who hasn’t spoken since. Addison provides for her sister by photographing the Zone’s twisted attractions on illicit midnight rides. Art collectors pay top dollar for these bizarre images, but getting close enough for the perfect shot can mean death—or worse.

When an eccentric collector makes a million-dollar offer, Addison breaks her own hard-learned rules of survival and ventures farther than she has ever dared. Within the Spill Zone, Hell awaits—and it seems to be calling Addison’s name.

Science fiction in comic form is such a treat: excellent story-telling with imaginative art! We asked you to share your favorite Sci-Fi comics and graphic novels, and you responded. Here are 25 of your favorites!

ApocalyptiGirl: An Aria for the End Times by Andrew MacLean

Starstruck: The Luckless, the Abandoned and Forsaked by Elaine Lee and Michael Wm. Kaluta

The Ballad of Halo Jones by Alan Moore and Ian Gibson

Transmetropolitan, Vol. 1: Back on the Street by Warren Ellis, Darick Robertston, and Garth Ennis

Those Left Behind (Serenity #1) by Joss Whedon, Brett Matthews, and Will Conrad