A few years ago, I was big into the Funko Pop life.  I scoured various toy and collectible websites for sales, visited my LCS (local comic shop) just to browse their stock, and looked for both Pops and boxes that were in a pristine condition to display on my shelves. If I bought a figure with a damaged box, I was on the hunt for one with an intact box like it was a whole new item, not merely a replica of something I already had in prettier packaging. I made it a point to collect entire lines, even if I didn’t particularly like the characters, because the completionist in me wouldn’t have it any other way.

Eventually, I had more than one of each figure, and I’d swap or freely give them away if a Pop was smudged or scuffed, no matter how small the perceived defect. My friends were amused by my sprawling collection, my family members concerned (“But what do you do with them? I don’t understand”). About a year ago, I finally started questioning the merits of such a collection, and cut it down by more than half. The ones I did keep more accurately reflect my interests, and I’m no longer obsessive about factory fresh boxes (some of mine look crushed, and I’m kind of proud of their history), or completing entire lines (but if anyone has an extra Honey Lemon from Big Hero 6, @ me). All that is to say that I understand the fervent habits of a collector; what I’ve never gotten is collecting books.

I only recently (like in the last two years or so) started buying series in one format (hardcover, paperback, ebook, mass market) instead of mixing and matching. I was finally persuaded to part with my childhood Harry Potter books, with their ripped, stained pages and completely destroyed (as in, hanging off the pages by a thread) hardbacks, in exchange for the ones with the Jonny Duddle–illustrated covers. But I never really got the appeal of buying the exact same book with the exact same content, just with a different cover design, if your original copy is still intact. I didn’t get it, but I could respect it.

I didn’t really get the appeal until I started doubling up on comic books in different formats. 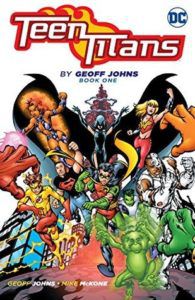 I was indoctrinated into the world of Teen Titans as a kid, and consequently, I will sift through anything that features the team (yeah, even the less-than-stellar New 52  incarnation). For Christmas a couple years ago, I treated myself to Geoff Johns’s Teen Titans omnibus, and this past holiday season, I asked my best friend if she could get me Johns’s Teen Titans Book One, a reprint in a wieldier, more easily-handled format. I immediately read it as if I was doing so for the first time. When the entirety of Marv Wolfman and George Pérez’s Teen Titans is released in the omnibus format, I want to add each behemoth to my shelves, alongside the trade paperbacks that collect the exact same material in smaller chunks. Why? The omnibuses (omnibi?) are great for reading on my desk, letting me ooh and ahh over the artwork splashed across larger panels, and I generally tend to get more engrossed in the story, but the trade paperbacks are easier to bring everywhere (everywhere). 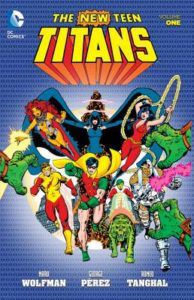 But I do wonder if having both TPB and omnibus is excessive, for both reasons of space and pure old-fashioned gluttony. Do I really need both the omnibus and the trades? Sure, the reading experience is different, but ultimately the collected material (give or take a few issues) is the same. Plus, DC tends to misprint their omnibus collections. Marvel (while much better), has a tendency to pull their omnibi from retailers faster than I can keep up with them.

I’m 87% sure that when I’ve moved to a new (smaller) place, my desire to keep multiple formats of the same material will be extinguished. But in the meantime: do you collect comics in different formats? What about books in general?