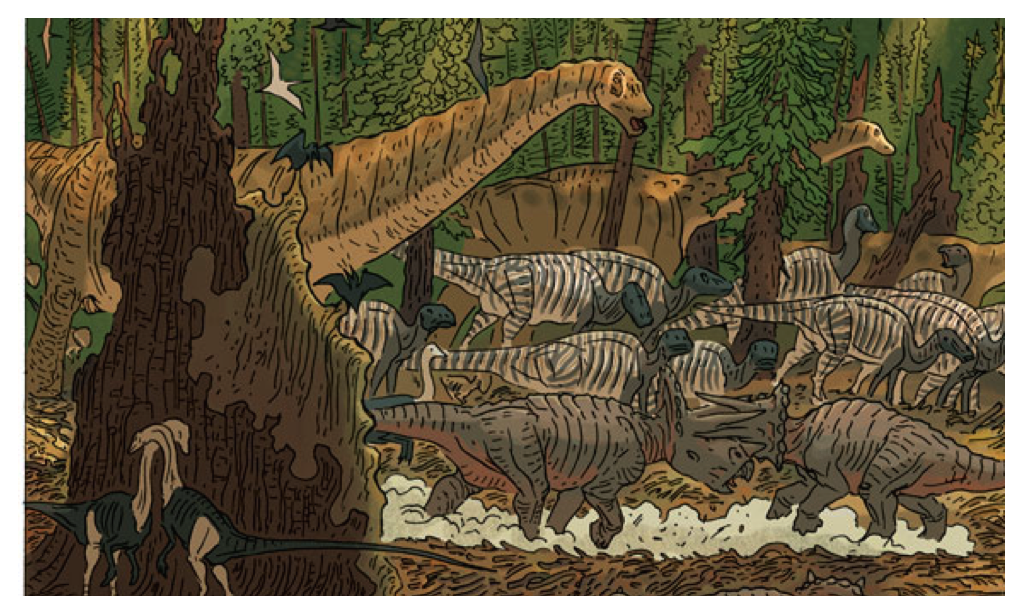 It’s been many years since Frederick Wertham argued that comic books contribute to delinquency and ignorance. Today, most educators realize that bright combinations of words and pictures inspire reluctant readers and encourage kids with difficultly acquiring literacy skills.

Age of Reptiles, a silent comic set tens of millions of years before the advent of human language, manages to create compelling stories, rife with dramatic tension, life and death conflict, and familial warmth, all without the use of verbal language.

It’s not the type of story I’d normally pick up; I only grabbed it as an afterthought, thinking, “Maybe the format will interest my stepdaughter.”

Stepdaughter, age ten, has a pretty stereotypical set of interests. She loves clothes and jewelry, singing and dancing. Her favorite show is Teenage Mutant Ninja Turtles, but My Little Pony, Ever After, and H2O run close behind. At no point in the six and a half years I’ve known her has she expressed an interest in dinosaurs.

This kid wrestles with intense dyslexia. It not only affects her ability to decode letters, but also creates a vast constellation of difficultly working with words in general. Since these troubles became apparent, I have never once seen her voluntarily pick up a book, let alone enjoy one.

I was doubtful that she’d get into a story primarily about carnivores eating and being eaten, but the description, “no words,” had a magical effect. We went through the first issue in the omnibus making appropriate dinosaur noises for each panel. Then I had to leave to do something else, and I figured that would be the end of it, but I was wrong.

The omnibus is a thick book, nearly 400 pages, comprising thirteen issues, split into 3 sections: “Tribal Warfare,” “The Hunt,” and “The Journey.” I was surprised that she came back to it three times that day, staying up twenty minutes past her bedtime reading. I made her go to sleep, and she returned in the morning to finish the book.

If that’s not a testament to the power of images, of comic books, of Ricardo Delgado’s artwork, then I don’t know how better to praise it.

These are compelling images, whether or not you hold an abiding interest in paleontology. Each dinosaur is rendered as a distinct character, drawn with identifiable emotions and expressions. The designs reflect modern ideals regarding dinosaurs: far from drab and colorless lizards, these creatures are rendered in vivid hues: scarlet, emerald, cerulean. They are striped and spotted (although not feathered; the first issues date back to the ‘90s). The brightest colors appear in the first volume, where the backdrop is lush and verdant. There is no lack of vegetation. Great green forests loom over rushing blue rivers.

Volume two showcases a world with an overabundance of water. Cumulonimbus anvils tower over rocky plateaus. Torrential rains reshape the landscape. Floods drive some dinosaurs into the jaws of great sea monsters that lay in wait beneath the waves, while tiny scavengers hang back to feast on those swept away by the tide. Leathery winged pterosaurs cut through thick clouds high above the maelstrom.

Age of Reptiles “The Hunt” issue 2: You guys might want to get out of that floodplain before that cloud opens up. Just sayin’.

By volume three, the world has change. Proto-mammals scamper among the rocks, and land turns tawny and brown with dust, speckled with the white of bleached out bones. The age of the thunder lizards is drawing to a close, and the earth reflects their demise as the dinosaurs march through dusty, predator-lined canyons.

These creatures, wide-jawed tyrannosaurus, long-clawed deinonycus, devil-horned carnotaurus, long-limbed oviraptor, are not portrayed simply as beasts. Theirs is a world of killing or being killed, sometimes both at the same time, holding grudges and taking revenge, but they also enjoy close family ties, protecting their eggs and their offspring.

In other words it’s a drama about life.

I don’t know if my stepdaughter will ever learn to love books, but she enthusiastically endorsed this one and asked if there might be any similar volumes about “puppies and kitties.” I haven’t come across any yet (“We3?” my brain asked, and then immediately answered, “That is probably not what she means”) but I did stumble upon Calle Claus’s Findrella, a wordless story about a teenage mermaid, which she devoured, gleefully announcing, “I read that one really fast!”

While she’s struggling with a book report on Diary of a Wimpy Kid at school, and not getting much out of it, it’s nice to know that wordless comic books can help normalize the reading experience for her.

Age of Reptiles “The Journey” issue 1: circling up to protect the young.