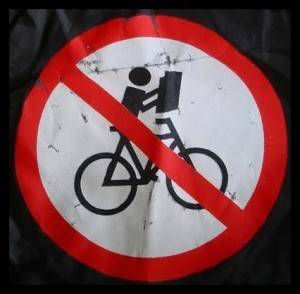 Like any extreme sport, hardcore reading has its perils.

The other day, I was absorbed in Elizabeth Knox’s Dreamquake while enjoying a crepe on my lunch break. I was so focused on the character’s travails that I failed to notice a large slice of proscuitto slide out of my crepe. When a string of melted cheese landed on my chin, I reached blindly for my napkin…and ended up gently wiping my face with proscuitto.

I know. Not cute.

Obviously the first people I told (once I got over the shock of having rubbed warm charcuterie on my own face) were my fellow Rioters, who responded by sharing their own book-related mishaps with me.

The stories were too hilarious not to pass on to you.

Jeanette: I have, more than once, tried to tap or swipe a page in a print book. Even worse, I’ve glanced to check the time, or how many minutes I have left in a chapter, or what percentage of the book I’ve read. Too much switching between technologies.

Kim: I spilled a giant (giant!) mug of tea all over my lap and my book while I was trying to read and drink at the same time. Luckily, I suppose, it had been sitting for so long that it was cold.

Jeff: Surely others have been reading on their back and dropped the corner of a hardback into their cornea. Surely.

Amanda: I sprained my wrist trying to pick up A Little Life at a funny angle. Don’t look at me like that. It’s heavy.

Sarah: Cried so hard at the end of Station Eleven while reading it on the subway that people moved away from me. Also missed my stop. By, like, a lot.

Alison: Got so excited reading a book that I went all Leslie Knope and HAD TO TALK ABOUT IT right now: went into Amazon to send it to a friend and sent to an ex instead. The wife was not too happy.

Cassandra: When I was in grad school, I would often have to read very late into the night to keep up with my coursework. One night, I was so tired that I read, re-read, and read again the same two pages before I realized that the reason it wasn’t making any sense was that the book was upside down.

Jess Pryde: I was reading Volume 10 of Y: The Last Man at the bus stop and missed two buses. Only one bus stops at that particular stop, so you’d think I would have noticed. Thankfully, it was rush hour. I might have also been crying. On the corner.

Kate: I have walked and read at the same time and been so absorbed that I bumped into a wall/door/random piece of furniture. I’ve probably earned a few bruises that way.

Jenn Northington: The pitfalls of working in a bookstore are that you can commit your blunders in front of an audience. Tied for Most Horribly Awkward are: the time someone finally told me that Edwidge Danticat was a female writer (I had never seen a picture! Or read one of her books!), and the time I walked in on an author in the store bathroom. No, I’m not going to tell you which one.

And one more from me: When I in high school, I had a loft bed. Because I’m a huge nerd, I would read in bed and be too lazy to put my books away. One night, I stretched in just the wrong way and at least five books fell out of the bed…and landed directly on the keyboard of the new laptop my parents had bought me for college.

Thanks to Team Riot for being kind enough to let me make their bookish blunders public!

Now I want to hear your bookish blunders, dear readers. Can you top our stories?