Last month I talked about my excitement for the reboot of DuckTales, one of Disney’s best animated shows. DuckTales has since premiered, with a lot of promotional music videos and teasers, and has earned an honorable fanbase.

The show is exactly what we fans of classic DuckTales wanted. It blends classic characterization with modern updates, snappy dialogue with crossover references, and a tight story about family. Rather than throw together problematic stories and label them with familiar characters, as Teen Titans Go and Powerpuff Girls did, DuckTales recreates the original cartoon’s spirit with love and new ideas. 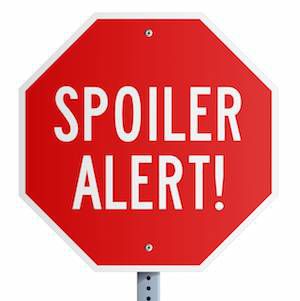 I am going to discuss spoilers for the DuckTales pilot. Disney has posted the full forty-minute episode to YouTube, so I suggest watching it first. Dive into that money bin and swim in the gorgeous animation and dialogue. 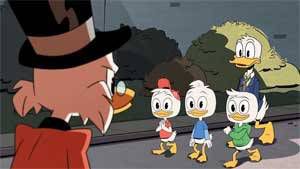 The DuckTales pilot starts with Donald Duck preparing for a job interview. His nephews try to help by dressing him in a suit and making breakfast. They also hope to boot him out so they can hotwire the family houseboat and go on adventures. Donald gets wise to this and drives them to his Uncle Scrooge’s house. The nephews hope they can bond with Scrooge, a self-made trillionaire and living legend. Scrooge, who hasn’t adventured in a while, locks them in a room with marbles. It takes a while for the family to actually get along; the housekeeper and her granddaughter Webby help. Eventually Scrooge decides that the nephews and Webby had revived his thrill for adventure, and he takes them to Atlantis.

Meanwhile, Donald finds out that his new job—sailor at Glomgold Industries—involves Atlantis as well. When his boss wants to murder Scrooge McDuck and the nephews, Donald has to battle his bad luck to save his family and keep Dewey from setting off death traps. Flintheart Glomgold is no fool, however, and not easy to outsmart, with his grudge against Scrooge and keen intellect. The Duck family manages to escape Atlantis and Glomgold, however, and Scrooge invites the nephews and Donald to move into his mansion after the houseboat burns down by accident.

As they move in, Dewey uncovers an old painting that shows Scrooge, Donald and an unknown third figure fighting a bird pirate. He identifies her with shock: “Mom?” 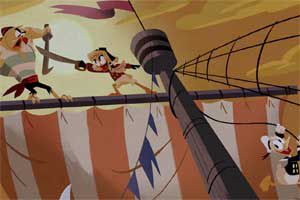 First, we all have to commend the stellar voice acting. David Tennant steps into Scrooge McDuck’s duck spats, transitioning from a grumpy mallard to an adrenaline junkie. Danny Pudi is the perfectly analytical Huey, while Ben Schwartz as Dewey adds overconfident energy to the mix, and Bobby Moynihan as Louie conveys the laid-back attitude for a chill thief. Kate Miccuci brings zest to a lonely but determined Webby, who can set up booby traps and take down monsters with quick thinking. Beck Bennett shows us that his Launchpad has never changed. Toks Olagundoye as Bentina Beakley reminds Scrooge and the audience that she is a housekeeper with martial arts training, not a secretary. Tony Anselmo has the hardest role as Donald Duck, perpetually angry and unlucky. The cast bounces off each other well and has developed good chemistry. Future episodes can only develop these dynamics. 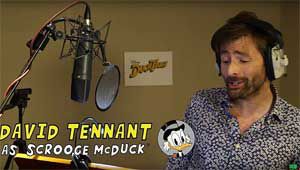 Donald in this cartoon is a good parent. This is a step up from previous animated incarnations, excluding the original DuckTales. As someone who grew up on the Donald Duck animated shorts, I felt that his 1930s parenting skills tended to lack. The boys weren’t a picnic to care for, with their various pranks and disobedience, but 1930s Donald sometimes went too far as a parent or as a chaotic force. Modern audiences at best could accept a grifter like Great-uncle “Grunkle” Stan from Gravity Falls; Donald as a well-meaning but overprotective parent seems more tasteful.

The pilot’s conclusion asks one crucial question: what happened to the triplets’ parents? Specifically, what happened to Della Duck, aka “Mom”? In the comics it was implied that both were deadbeats, and Della Duck was given more depth in the Scandinavian comics as an avid astronaut.

Dewey recognizes his mother from a portrait, which means that Donald has pictures of her, or Dewey remembers Della from a young age. Scrooge doesn’t mention her by name but has fallen out with Donald since their adventuring days. The two uncles don’t want to give details, though Donald blames Scrooge for a “Spear of Selene” incident.

Whatever the mystery is, I trust that Disney will explain over time and not delay it to the second season glares at Gravity Falls then admits that I miss that show dearly. We are here for more than one adventure, and to have a moment of clarity and childhood in a crazy year.